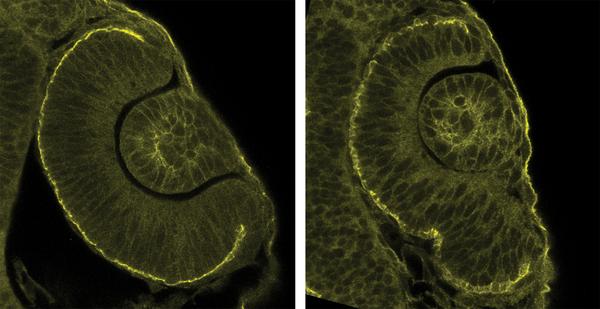 A normal optic cup of a zebrafish (left) and a perturbed optic cup (right).

For successful organ formation, it is very important that cells generate unique shapes and architecture from which these organs develop. Also during the development of the vertebrate eye, cells need to actively migrate to the correct locations to generate the right tissue shape. The lab of Caren Norden at the Max Planck Institute of Molecular Cell Biology and Genetics (MPI-CBG) showed that such cell movements are crucial already at early developmental stages. If cells do not reach the right place at the right time, all further eye development is impaired.

Organogenesis depends on the orchestrated interplay of molecular and cellular changes as well as overall tissue rearrangements. To understand how this is regulated at these different scales and how cellular and tissue behaviour feed back onto each other is a main interest of Caren Norden’s lab at the MPI-CBG. To reach this goal the group uses the small zebrafish as it has the advantage of fast development and unmatched imaging possibility due to the fact that the larvae are translucent. This means that developmental processes can be observed while they happen where they happen in the live embryo.

The lab is particularly interested to understand how the vertebrate eye forms during development. A recent project focused on the emergence of the optic cup. From this early developmental structure the later retina develops. This cup, like the future retina, has a hemispheric architecture. So far, it was assumed that the hemispheric shape is reached by cells constricting and pulling additional cells into the cup. The Norden group however showed that mere passive pulling is not enough to get a sufficient amount of cells into the cup but that instead a significant amount of cells undergoes active migration. They further identified the molecular mechanisms that drive this cell migration. When this cell migration is impaired, the optic cup does not acquire its hemispheric shape, but instead of a c-shaped cup an s-shaped cup is formed. This can lead to a massive coloboma and in extreme cases even secondary lens formation.

This study is a prime example of what Caren Norden’s group is very excited about. To understand how the right cells reach the right place in development is one of the core questions in diverse projects in the group. Cell movements play a crucial role in many developmental contexts in diverse examples of organ formation so that understanding how cells get where they later function is one of the important questions to ask when one wants to understand development of organisms including humans.