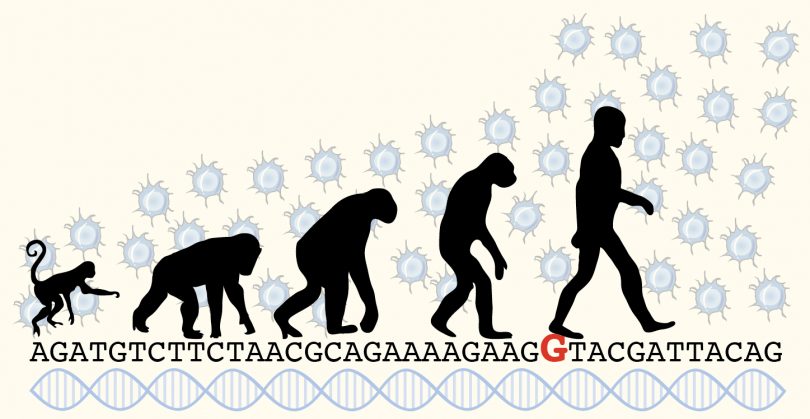 What distinguishes humans from monkeys and apes? The gene ARHGAP11B is probably among the things that make humans special: This gene is only present in humans and contributes to the amplification of brain stem cells. Researchers at the Max Planck Institute of Molecular Cell Biology and Genetics (MPI-CBG) have now made a spectacular finding: It is a single base pair substitution in the ARHGAP11B gene that ultimately is responsible for the ability of the ARHGAP11B protein to amplify brain stem cells, a process thought to underlie the expansion of the neocortex in modern humans.

During evolution, the human genome has undergone subtle changes that underlie the expansion of a particular region of the brain called the neocortex. This part of the brain is responsible for cognitive functions like speaking and thinking. Wieland Huttner, MPI-CBG Research Group Leader and Director, and his team have recently shown that the gene ARHGAP11B is key to the regulation of brain size. This gene is only found in humans and in our closest relatives, the Neanderthals and Denisova-Humans, but not in chimpanzees, as collaborator Svante Pääbo from the Max Planck Institute of Evolutionary Anthropology in Leipzig has shown. Moreover, ARHGAP11B induces an increase in a specific subpopulation of brain stem cells called basal progenitors, which have been implicated in neocortex expansion, and can trigger folding of the neocortex in mouse.

The human-specific gene ARHGAP11B arose through a partial duplication of the ubiquitous gene ARHGAP11A approximately five million years ago along the evolutionary lineage leading to Neanderthals, Denisovans, and present-day humans, and after this lineage had segregated from that leading to the chimpanzee. However, the big leap in neocortex expansion began later, about two million years ago. How, then, could ARHGAP11B possibly be a key player in increasing neocortex size, researchers wondered.

There is more to ARHGAP11B that makes it unique: Not only is the gene as such human-specific, but the protein encoded by the gene contains a sequence of 47 amino acids that is only found in humans and that is due to a shift in the reading frame caused by the absence of 55 nucleotides in the ARHGAP11B messenger RNA.

Wieland Huttner and Marta Florio, PhD student in Huttner’s group, first thought that the absence of these 55 nucleotides would go back to when ARHGAP11B arose by partial gene duplication five million years ago. This is when they got lost, the researchers assumed. But then they realized, to their astonishment, that the stretch of 55 nucleotides is indeed present in the ARHGAP11B DNA and only disappears when the messenger RNA of ARHGAP11B is produced – they are spliced out. This is triggered by a single C-to-G base substitution in the ARHGAP11B gene. A really tiny change at the molecular level, given that the human genome consists of more than three billion base pairs. The consequences, however, are not tiny at all: The single mutation leads to eliminating the 55 nucleotides from the ARHGAP11B messenger RNA, which in turn leads to the 47 amino acid sequence in the ARHGAP11B protein that is human-specific – leading to an increase in the abundance of basal progenitors, thought to be key to the evolutionary expansion of the human neocortex.

Reconstruction of an ancestral version of the gene

The C-to-G base substitution in ARHGAP11B probably happened much later than when this gene arose about 5 million years ago, anytime between 1.5 million and 500,000 years ago. The Dresden researchers wanted to cross-check the significance of this base substitution for the function of the ARHGAP11B protein, and therefore reconstructed an ancestral version of the ARHGAP11B gene as it likely arose approximately 5 million years ago – without the single base pair substitution. Remarkably, when expressed in mice, the ancestral ARHGAP11B protein did not lead to an increase in the abundance of basal progenitors.

Implications of the results

The finding that a mere single point mutation may have causally contributed to the expansion of the neocortex is remarkable. Wieland Huttner says: “This change is tiny on a genomic scale but substantial in its functional and evolutionary consequences – it’s a single base substitution that likely drove brain size evolution and that may have set the stage for what makes humans special.” Point mutations are not rare, but in the case of ARHGAP11B its advantages seem to have immediately influenced human evolution.