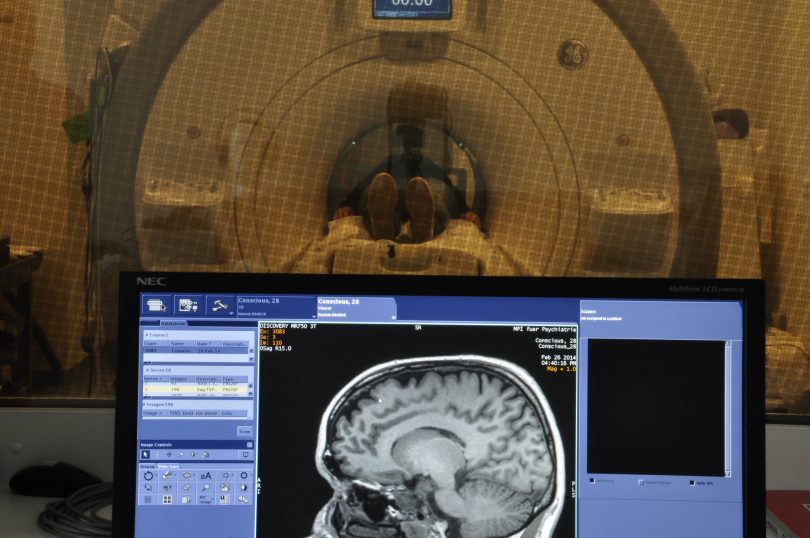 Probands had to solve maths problems in the MRI.

Risk of mental illness can be inferred from stress response

Did doing math problems make you stressed at school? That’s what happened to participants in a study of the brain’s reaction to stress. For the first time, researchers looked at the entire duration of such a situation. They found not only changes in the communication of brain regions, but also a dynamic process: Different networks behaved differently during acute stress. From this, the scientists were able to determine how susceptible a person is to negative mood and how much this increased their risk of mental illness.

Until now, experts knew little about the dynamic processes in the brain during acute stress. Research has usually focused on the brain areas that are active at a given time. Now, however, scientists from the Max Planck Institute of Psychiatry (MPI) and the Department of Psychiatry and Psychotherapy at Tübingen University Hospital have observed what happens in the brain over the entire period of a stressful situation, such as while solving a tricky math problem. “Our study shows not only where changes occur, but how different brain regions interact and how their communication changes over the course of the situation,” summarizes first author Anne Kühnel from the MPI. The results of the study were recently published in the journal Biological Psychiatry.

The participants were asked to solve math problems under time pressure while inside a magnetic resonance imaging scanner. The dynamic response of the brain’s networks in this stressful situation differed in the study participants. The scientists were able to relate the responses to how anxious or depressed the participants were. It is known that the more negative a person’s basic temperament is, the higher their risk of mental illness. “The altered communication between brain regions supports the theory that mental disorders are network diseases in which the interaction of neural units is disturbed,” says MPI Director Elisabeth Binder and continues, “The new findings are important for developing more individualized diagnoses and personalized therapies.”

Nils Kroemer, who heads the Computational Psychiatry group in Tübingen, sees great potential in the new findings, especially for individualized approaches in the treatment of stress-related diseases: “We were able to show for the first time how important individual patterns of the stress response in the brain are to better understand the experience of stress – including the unfavorable after-effects of stress. In the future, we could use our dynamic models of brain response to study, for example, the targeted effects of drugs that might improve the stress response in high-risk individuals.”
In the study, the scientists included people with and without affective disorders such as depression and anxiety disorders. In addition to magnetic resonance imaging, they measured levels of the stress hormone cortisol and heart rate. The volunteers were taking part in the BeCOME study, in which MPI researchers are searching for biomarkers as objective measurements that provide important information about mental illnesses.