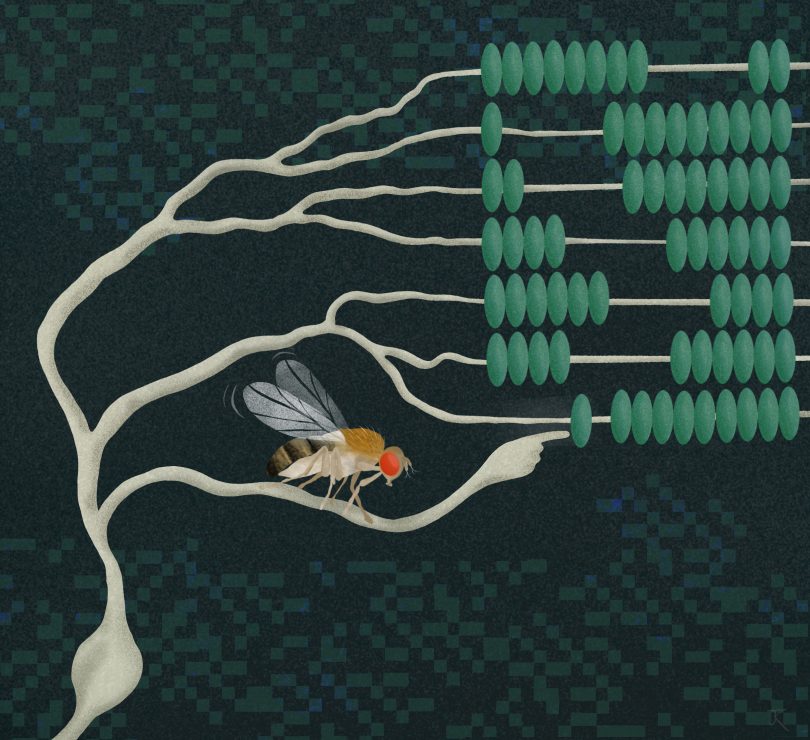 Scientists now show that neurons in the fruit fly brain multiply by dividing by the reciprocal. © MPI for Biological Intelligence, i.f. / Kuhl

Study deciphers how a single nerve cell can multiply.

Neurons are constantly performing complex calculations to process sensory information and infer the state of the environment. For example, to localize a sound or to recognize the direction of visual motion, individual neurons are thought to multiply two signals. However, how such a computation is carried out has been a mystery for decades. Researchers at the Max Planck Institute for Biological Intelligence, in foundation (i.f.), have now discovered in fruit flies the biophysical basis that enables a specific type of neuron to multiply two incoming signals. This provides fundamental insights into the algebra of neurons – the computations that may underlie countless processes in the brain.

We easily recognize objects and the direction in which they move. The brain calculates this information based on local changes in light intensity detected by our retina. The calculations occur at the level of individual neurons. But what does it mean when neurons calculate? In a network of communicating nerve cells, each cell must calculate its outgoing signal based on a multitude of incoming signals. Certain types of signal will increase and others will reduce the outgoing signal – processes that neuroscientists refer to as ‘excitation’ and ‘inhibition’.

Theoretical models assume that seeing motion requires the multiplication of two signals, but how such arithmetic operations are performed at the level of single neurons was previously unknown. Researchers from Alexander Borst’s department at the Max Planck Institute for Biological Intelligence, i.f., have now solved this puzzle in a specific type of neuron.

The scientists focused on so-called T4 cells in the visual system of the fruit fly. These neurons only respond to visual motion in one specific direction. The lead authors Jonatan Malis and Lukas Groschner succeeded for the first time in measuring both the incoming and the outgoing signals of T4 cells. To do so, the neurobiologists placed the animal in a miniature cinema and used minuscule electrodes to record the neurons’ electrical activities. Since T4 cells are among the smallest of all neurons, the successful measurements were a methodological milestone.

Together with computer simulations, the data revealed that the activity of a T4 cell is constantly inhibited. However, if a visual stimulus moves in a certain direction, the inhibition is briefly lifted. Within this short time window, an incoming excitatory signal is amplified: Mathematically, constant inhibition is equivalent to a division; removing the inhibition results in a multiplication.

“We have discovered a simple basis for a complex calculation in a single neuron,” explains Lukas Groschner. “The inverse operation of a division is a multiplication. Neurons seem to be able to exploit this relationship,” adds Jonatan Malis.

The T4 cell’s ability to multiply is linked to a certain receptor molecule on its surface. “Animals lacking this receptor misperceive visual motion and fail to maintain a stable course in behavioral experiments,” explains co-author Birte Zuidinga, who analyzed the walking trajectories of fruit flies in a virtual reality setup. This illustrates the importance of this type of computation for the animals’ behavior.

“So far, our understanding of the basic algebra of neurons was rather incomplete,” says Alexander Borst. “However, the comparatively simple brain of the fruit fly has allowed us to gain insight into this seemingly intractable puzzle.” The researchers assume that similar neuronal computations underlie, for example, our abilities to localize sounds, to focus our attention, or to orient ourselves in space.

This article is also available in audio format. Visit https://www.bi.mpg.de/news/2022-02-borst.