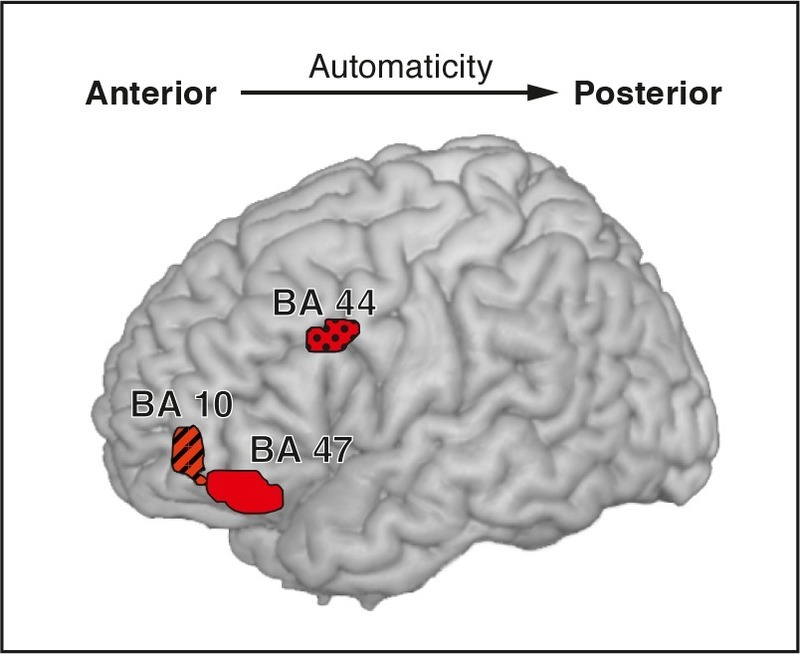 A New Model to describe cognitiv processes in the brain

The Relationship between the mind and the brain remains one of nature’s greatest mysteries. For a long time, scientists have endeavoured to detect the functions and interactions of specific areas of the brain. Their consistent empirical findings are often surprising, leading to revisions of previous explanatory models. Angela D. Friederici, director of the neuropsychological departement at MPI together with her colleague, Hyeon-Ae Jeon, have recently created a new model for processing hierarchical structures referring to mentality and activity in the human brain. The new model focuses on the crucial role of the degree of automaticity regarding these processes.
The ability to form word structures from learnt rules is a unique human skill. With our highly developed sophisticated brain we are able to learn and implement syntactical rules. Until now, scientists have provided evidence to show two areas of the brain that significantly determine these competences: the Broca area in frontal lobe, supporting syntactical processing and the Wernicke area in temperal lobe, mainly responsible for semantic and word processing.

It is also possible for animals to associate words with objects. They are able to learn the meaning of a word, for example, dogs can learn simple word orders. For processing human language, however, the brain needs to identify and relate the hierarchy between words and parts of sentences. From a scientific viewpoint , this possibility is closely connected to the left part of the frontal lobe of the prefrontal cortex (PFC).

The PFC, part of the frontal lobe in cerebral cortex, is generally known to be important for a broad range of controlled actions in humans. Along with scientific evidence, it has been well acceptetd that parts of the PFC (dorsolateral PFC) and more frontal areas are activated while processing cognitive hierarchy. These frontal areas are applied as a network that is involved in highly controlled processing.

However, results of current studies have revealed discrepancy: On one hand, high hierarchy and controlled processes require frontal areas, whilst on the other, language processing with increased complexity induces activation patterns in the posterior Broca –area.

To discover the reason for different representation of hierarchy related to cognitive control and representation of hierarchy in first language, Anagela D. Friederici and Hyeon-Ae Jeon have focussed on the role of degree of automaticity during processes: Processing first language in adults runs high automatical and causes in adults brain activation in posterior Broca areal. Contrastingly, for first language the high degree of automaticity in frontal areas of the Broca region that is required for processing more complex syntax, is not fully developed in children’s brains. The same is true for adults while processing second language.

Scientists compared the results of different studies and analysed how different degrees of automaticity impact representation while processing hierarchy, thus when particular areas of brain are activated. Results show a drift in activation pattern from posterior to anterior areas during processing tasks with low degree of automatism, while increasing hirarchical level. However, while processing first language, activation patterns are confined to posterior regions of Broca area, such as for tasks with higher hierarchical levels.