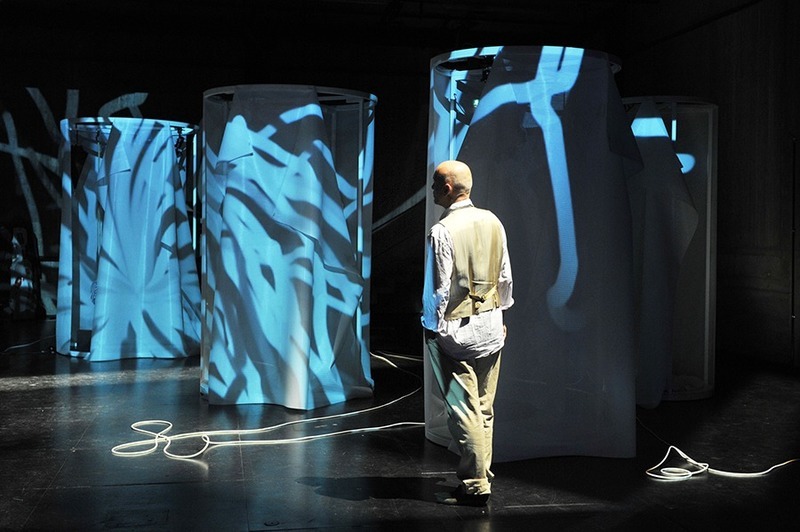 Neuroscientists from the Max-Planck Institute in Leipzig produced a scientific programme for the closing event of the internationally acclaimed music theatre performance “Musicophilia”, which makes the interaction between music and the brain tangible with all the senses.

“C major is blue”, shouts a protagonist emerging from behind a white net curtain. “I have perfect pitch”, cries another. Another is silent at first but suddenly produces a humming “good morning”. What does it look like when several sensations merge? Can people who are no longer able to speak, but can sing, identify the pitch of any tone?

What is hard to imagine is rendered perceivable in this experimental music theatre production “Musicophilia”. Taking the audience on a dramatic poetic journey through the human brain, neurological discoveries are viewed through unexpected perspectives, colors, choreography, and sounds. Boundaries between the outer and inner experiences of music blur in a kaleidoscope of light, movement, and sound.

This production stemmed from the bestseller “Musicophilia” by the British neurologist Oliver Sacks, which talks about humans losing or gaining their musicality to brain disorders. Sacks is convinced that a “love of music” is something universal; something every human being possesses.

Arno Villringer, Daniela Sammler, and Tom Fritz, neuroscientists at the Max Planck Institute for Cognition and Brain Sciences in Leipzig, are well aware that music is profoundly human and one of the oldest social-cognitive capabilities that plays a fundamental role in the evolution of human communication. They undertake the scientific support and complement the three performances with talks on their current research in the field of music and the brain.

As an introduction, Daniela Sammler explains in her presentation “Music is the key” how language and music affect the brain. Using vivid examples she illustrates how the boundaries between music and language or singing and talking merge in our brains. For example, in the whistling language that is still taught in schools on the Canary Island of La Gomera, messages are transmitted over several kilometres by whistling: “Could you get a kilo of tomatoes from the shop, please?” whistles one Canary in one of Sammler’s audio samples.
Musical and linguistical sounds also fuse in the drum language of West Africa. News of celebrations or funeral ceremonies can be sent over long distances by “talking drums”.

“It’s incredibly impressive how these abstract processes that take place in the brain while processing music and language can be converted artistically in ‘Musicophilia’. Language and music—both being mediums of art—are addressed”, describes Sammler enthusiastically.

Following its premiere in 2012, the production went on a successful world tour and won the International Music Theatre Now Award 2016. A new edition of the (neuro-) scientific supporting programme took place on the 4th, 5th, and 6th February 2016 in Munich.