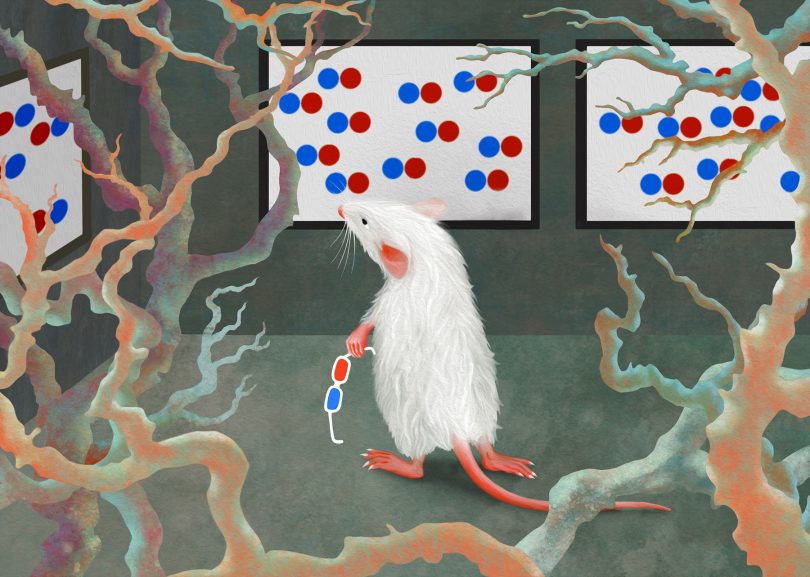 When mice look at nearby objects through 3D glasses, nerve cells in the RL region of their brain become active. The resulting image of the nearby, accessible environment may help to interact with nearby objects or other mice, for example. © MPI of Neurobiology / Kuhl

When viewing objects within reach of our hands, specific areas in the brain become active. This is true in humans as well as in mice. Researchers at the Max Planck Institute of Neurobiology have now identified a mouse brain region that appears to specialize in the perception of the nearby environment. In addition to visual impressions, the region also receives information from the whiskers. By comparing distances the mouse has seen and felt, the young brain may, for example, learn to estimate the own range.

Generally, the brain knows the body’s radius of action. To estimate the relevant distance, it uses a variety of methods. One of these is depth perception via three-dimensional vision using two eyes. “If you close one eye, it becomes significantly more difficult to grasp something with pinpoint accuracy”, explains neurobiologist Mark Hübener. This 3D depth perception is processed by special neurons.

If both eyes are looking at the same point, the position of the eyes results in a small difference in the viewing angle. The 3D nerve cells react to this difference. They help us to see in three dimensions, recognize depth and use that information to calculate distances. Exactly how the brain does this, dividing space into categories such as ‘within reach’, ‘near’, or ‘far’, is largely unknown.

“The mouse brain also has these 3D nerve cells, although far fewer than we have. As a result of their eye position, mice can only see in three dimensions over a small area”, says Hübener. In order to investigate the role of these neurons in the perception of ‘space’, the researchers put 3D glasses on the animals. They then showed them ‘Random Dot Stereograms’.

“Some people may remember the principle from books such as ‘Magic Eye’, which were popular for a while”, suggests Hübener. “After spending a certain amount of time staring at a picture with an apparently random dot pattern, a three-dimensional structure eventually appears. Alternatively, you can put on the 3D glasses, and they give the dots coherence.”

When the mice looked through the 3D glasses, a particularly large number of nerve cells in a small brain region called RL reacted to the now visible 3D structures. The RL region is located on the edge of the visual cortex and its function has until now been unclear. In his study, Alessandro La Chioma was able to identify various characteristics of the nerve cells in this region. He described the RL region as an important area of the brain for exploration of the nearby environment.

Many of the 3D neurons in the RL region receive their information from the lower part of the field of view. These cells reacted primarily to objects in the immediate surrounding. “This is probably a learned response, as experience teaches us that nearby objects are found mostly in the lower field of view,” explains Tobias Bonhoeffer, co-author of the study. However, in order to learn such a connection, feedback from more than one sense is required.

Although part of the visual cortex, the RL region not only receives visual information from the nearby area: some nerve cells also react to feedback from the whiskers. “The RL region could therefore match a distance perceived with the eyes to the information on the tactile range of the object”, says Hübener. “Using these experiences, the brain could then create a picture of the immediate environment, which could later be extended to more distant and more abstract objects.”