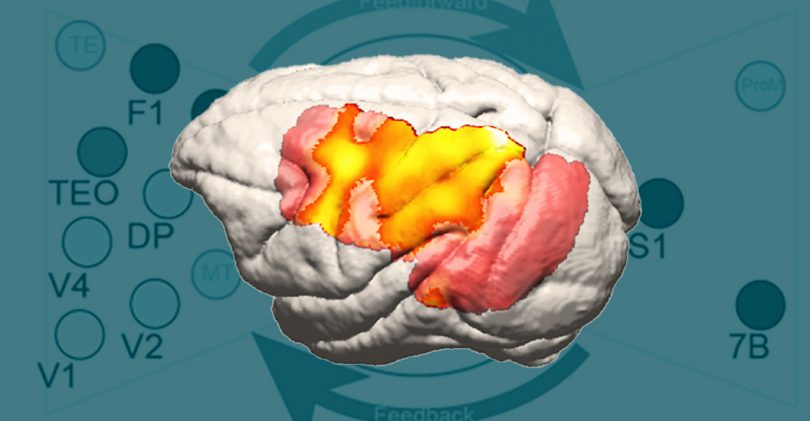 The brain is much more than the sum of its parts, and these parts interact via complex networks. Researchers at the Ernst Strüngmann Institute have now been able to show that at least four of them coexist, mediated by the neuronal synchronization of four brain rhythms.

When two people get along really well, it is colloquially said, that they are on the same wavelength. “The same wavelength“ plays an important role in the brain, too. Here, synchronized brain rhythms, also called oscillations, ensure the successful exchange of information. Moreover, different oscillations contribute significantly to identifying different interaction networks.
Researchers at the Ernst Strüngmann Institute (ESI) for Neuroscience in Frankfurt have now been able to show that at least four of these coexist. The phenomenon is described in detail in their article, which was just published in Neuron, one of the leading journals in their field. “Our goal was to visualize the interaction networks in the cerebral cortex. And to describe how they relate to the neuronal connectivity,” says Julien Vezoli, associate researcher at the ESI and first author of the study. “The basic framework for these interaction networks has long been studied using anatomy in non-human primates. We now wanted to expand the functional understanding of brain connectivity with empirical data.”

The researchers recorded the brain activity of two macaques. Measurements were taken at more than 200 sites distributed over 15 brain areas. This produced a huge amount of data which allowed the scientists to examine the actual neuronal interactions between more than 40,000 pairs of brain sites and more than 100 pairs of brain areas.
“We found that rhythmic interactions take place mainly in four different frequency bands. Or on four different wavelengths, to resume the example above,” Julien Vezoli summarizes the results. “And that each band defines its own interaction network with a characteristic spatial network structure.”

New perspectives on the human brain

Julien Vezoli and his colleagues then correlated these interaction networks with anatomical data from Henry Kennedy’s lab at the Stem-cell and Brain Research Institute in Lyon, France. The procedure showed that some interaction networks are more strongly linked to anatomy than others.
These results contribute to our understanding of structure-function relationships in large-scale networks covering different brain regions and provide strong constraints on mechanistic models of brain function. Because this approach can be adapted to noninvasive techniques, it promises to open new perspectives on the functional organization of the human brain.