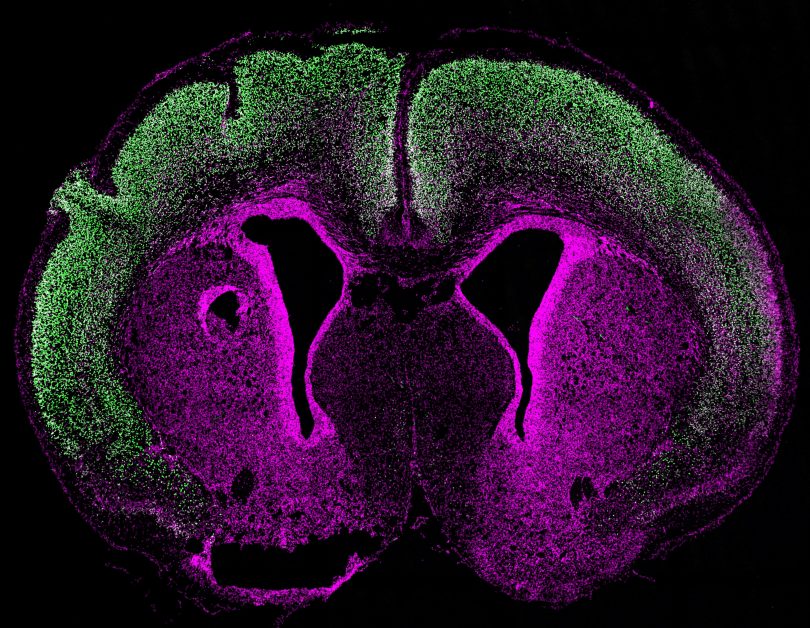 Overexpression of LGALS3BP, a gene usually not expressed in the mouse brain, leads to brain folding. © MPI Psychiatry

Neuronal migration is a fundamental step in the development of the central nervous system. Specific cells, so called basal progenitors (BPs), in humans contribute to neuronal expansion. The exact molecular and cellular processes of this expansion are poorly understood. Scientists from the Max Planck Institute of Psychiatry discovered a new important role for the cancer biomarker protein LGALS3BP in this process. This gene is enriched in human neural progenitors (NPCs). Silvia Cappello’s team were able to show that individuals with specific genetics variants of LGALS3BP have differences in their cerebral cortex. Using a series of cutting-edge tools, including human cerebral organoids, they found that LGALS3BP controls the position of the NPCs and is involved in the NPCs’ anchoring and migration in the extracellular matrix within the human brain. “LGALS3BP is enriched in the developing human brain and its secretion in extracellular vesicles is essential for the correct folding of the cortex”, summarizes Cappello. This study is another example of how cerebral organoids can contribute to understanding normal and abnormal human brain development. The results are recently published in the well-known scientific journal Nature Communications.