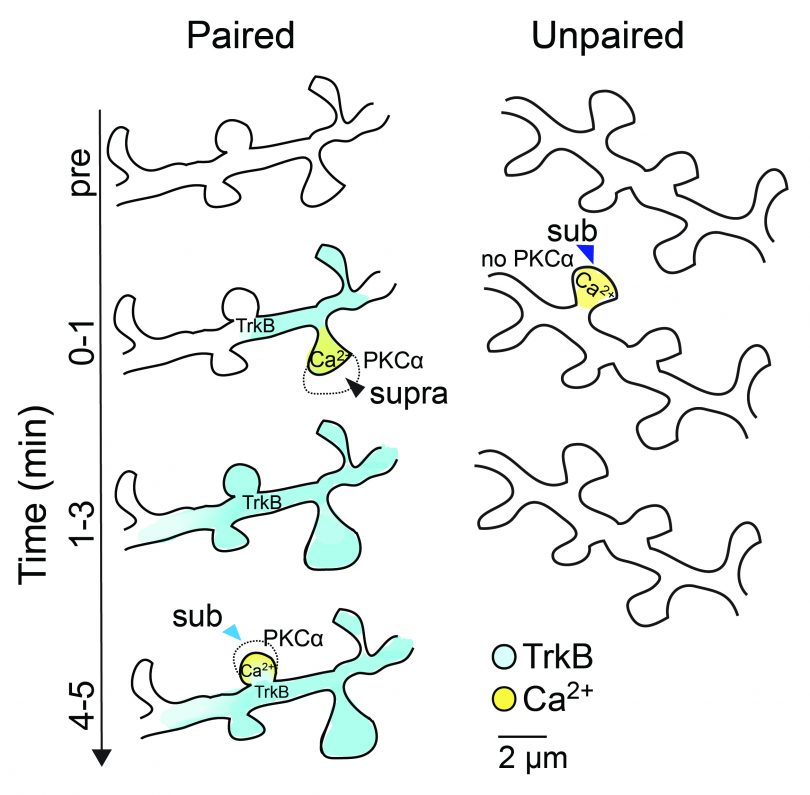 Inside the brain, is a complex symphony of perfectly coordinated signaling. Hundreds of different molecules amplify, modify and carry information from tiny synaptic compartments all the way through the entire length of a neuron. The precise interplay of these proteins is critical for normal neuronal function; ultimately allowing the brain to achieve feats like cognition, decision making, and sensory perception.

Researchers from the lab of Ryohei Yasuda at the Max Planck Florida Institute for Neuroscience (MPFI), study the elaborate nexus of signaling proteins involved in learning and memory; looking at a unique process called synaptic plasticity, the innate ability of a neural synapse to either strengthen or weaken. Understanding how proteins behave during plasticity is key to unlocking how we learn and how memories are formed.

In a study published in Nature Neuroscience in July 2018, Dr. Lesley Colgan, a Research Fellow in the Yasuda Lab and leading author of the paper, delves into the role that Protein Kinase C (PKC) plays in synaptic plasticity. PKC represents an entire family of 12 distinct kinases, that propagate a biochemical signal through the phosphorylation of target proteins they interact with. While previously implicated in synaptic plasticity, engineering tools sensitive enough to study PKC in the brain has been a major challenge. Yasuda’s team developed a host of sensors that can track the activity of PKCs with unprecedented specificity and sensitivity, probing when and where activation occurs as well as how these enzymes turn on and off. With these powerful sensors, they have been able to look more closely at the role that PKC plays at the single synapse level.

One enzyme in the PKC family, PKCα, plays a direct role in facilitating synaptic plasticity. When PKCα activity is perturbed, plasticity is subsequently disrupted; demonstrating that the protein is a critical first step in the initial molecular cascade. PKCα also has very robust activation and is rather spine specific, confining its activity to only the stimulated spine and not spreading to the surrounding dendrites.

A unique discovery of the study, found that PKCα acts to integrate two temporally distinctive signaling pathways both known to be critical for synaptic plasticity. The first is BDNF mediated, a slower, diffuse signal developing over minutes and the second, is NMDA receptor mediated calcium influx, a spine-specific signal occurring in a matter of milliseconds and necessary to begin the rapid molecular cascade of synaptic plasticity. Adaptably responding to both of these signals, PKCα is able to sample recent synaptic history and integrate it with current synaptic events, enabling complex processing of information at the single spine level.

Investigating these intriguing findings further, the team was able to successfully link molecules to memory, uncovering that PKCα is required for efficiency of learning. Mice with PKCα removed from the brain, take a significantly longer amount of time to become proficient at a learning task than counterparts containing intact PKCα protein. Despite this lengthier learning curve, if given additional training, mice lacking PKCα will eventually learn the task just as well as wild type mice; supporting the notion that PKCα is critical for encoding a memory but may not play a significant role in the recall of a memory once it’s established.

This work represents a substantial advancement in the field, providing integral tools that will enable the disentanglement of complex signaling related to learning and memory. According to Dr. Colgan, “These newly developed sensors will have broad usage in neuroscience and cell biology alike, allowing the study of many complex signaling pathways that PKC has a hand in.”

This work was supported by National Institutes of Health, Max Planck Florida Institute for Neuroscience and Max Planck Society. The content of this article is solely the responsibility of the authors and does not necessarily represent the official views of the funding agencies.