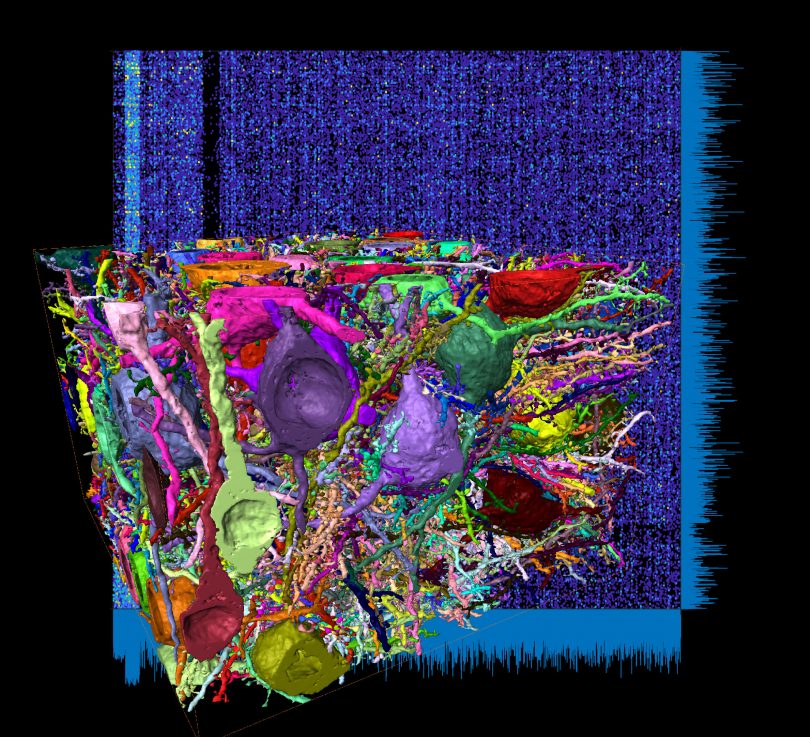 Dense connectome from the mouse cerebral cortex, the largest connectome to date. Reprinted with permission from A Motta et al.

Researchers use 3-dimensional electron microscopy to map the local connectome in the cerebral cortex.

Mammalian brains, with their unmatched number of nerve cells and density of communication between them, are the most complex networks known. While methods to analyze neuronal networks sparsely, accessing about one in every ten-thousandth nerve cell has been available for decades, the dense mapping of neuronal circuits by imaging each and every synapse and all neuronal wires in a given piece of brain tissue has been a major challenge. In an article published today in Science, researchers from the Max Planck Institute for Brain Research in Frankfurt, Germany, report that they succeeded in the dense connectomic mapping of about half a million cubic micrometers of brain tissue from the mouse cerebral cortex using 3-dimensional electron microscopy and AI-based image analysis.

Unlike any other organ, our brains contain extremely densely packed networks of membranous cables that are used by our about 86 billion nerve cells for communication amongst each other. Since each nerve cell in the main part of mammalian brains, the so-called cerebral cortex, communicates with about 1,000 other nerve cells via synapses placed along these cables over long distances, one expects a total of about 5 million kilometers of wires packed into our skulls – more than 10 times longer than all highways on our planet, in each of our brains. The cables we find in our (and other mammalian) brains are as thin as 50 to 100 nanometers in diameter, about 1000th the diameter of our hairs. The resulting cable convolute is of such density and magnitude, that for more than 100 years, researchers have been able to only map connectivity between a minuscule fraction of neurons in a given piece of brain.

Only the development of faster electron microscopic techniques (“3D EM”) and of more efficient image analysis routines has made the dense mapping of neuronal networks possible. The novel field of “connectomics” has been pursuing the dense mapping of ever larger circuits in several species and brain regions.

In the work published today in Science, a team around Max Planck Director Moritz Helmstaedter imaged and analyzed a piece of tissue from the cerebral cortex of a 4-week old mouse, obtained via biopsy from the somatosensory cortex, a part of the cortex occupied with the representation and processing of touch. Here, the researchers applied optimized AI-based image processing and efficient human-machine interaction to analyze all of the about 400,000 synapses and about 2.7 meters of neuronal cable in the volume. With this, they produced a connectome between about 7,000 axons and about 3,700 postsynaptic neurites, yielding a connectome about 26 times larger than the one obtained from the mouse retina more than half a decade ago. Importantly, this reconstruction was at the same time larger and about 33-times more efficient than the one applied to the retina, setting a new benchmark for dense connectomic reconstruction in the mammalian brain.

Fueled by this this methodological breakthrough in connectomics, the researchers analyzed the connectome for the patterns of circuitry present. In particular, they asked what fraction of the circuit showed properties that were consistent with the growth of synapses, mechanisms known to contribute to circuit formation and “learning”. Alessandro Motta, first author of the study and an electrical engineer by training, used particular configurations of synapse pairs to study the degree to which they were in agreement with activity-related learning processes (“LTP”). “Because some models of synaptic plasticity make concrete predictions about the increase in synaptic weight when learning, say, to identify a tree or a cat, we were able to extract the imprint of such potential processes even from a static snapshot of the circuit”, explains Motta. Since the mouse had had a normal laboratory life until the brain biopsy at 4 weeks of age, the scientists argue that the degree to which circuits are shaped by learning in “normal” sensory states can be mapped using their approach.

“We were surprised how much information and precision is found even in a still relatively small piece of cortex”, says Helmstaedter, and adds “Especially the extraction of the likely learned circuit fraction was a major eye opener for us”.

The reported methods may have substantial implications for the transfer of insights about biological intelligence to what today is called “artificial intelligence”. “The goal of mapping neuronal networks in the cerebral cortex is a major scientific adventure, also because we hope to be able to extract information about how the brain is such an efficient computer, unlike today’s AI”, states Helmstaedter. And describes a research field with major players including Google and the research program of the intelligence agencies in the US (IARPA): “The ambition to learn from biological neuronal networks about the future of artificial neuronal networks is shared by major initiatives world-wide. We are very proud of having achieved the first milestone, a dense local cortical connectome, using exclusively public funding from the Max Planck Society”.

After almost a decade of work, the researchers are enthusiastic about their achievements. “Being able to take a piece of cortex, process it diligently, and then obtain the entire communication map from that beautiful network is what we have been working for over the last decade”, describes Helmstaedter.
The researchers conclude: “We think that our methods, applied over a large range of cortical tissues from different brain areas, cortical layers, developmental time points, and species will tell us how evolution has designed these networks, and what impact experience has on shaping their fine-grained structure”.

“Moreover, the connectomic screening will allow the description of circuit phenotypes of psychiatric and related disorders – and tell us to what degree some important brain disorders are in fact connectopathies, circuit diseases.”