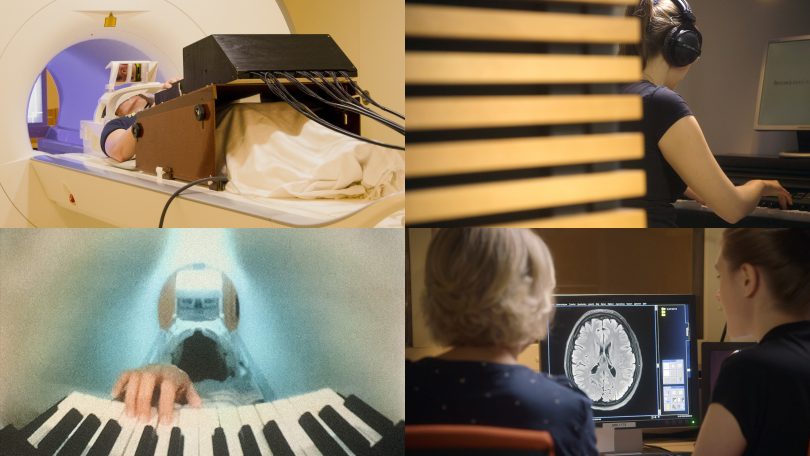 Making music together is a unique challenge: Not only must a musician plan and execute the sounds made by their own instrument, but they have to coordinate their actions with those of others. This is an extraordinary accomplishment on the part of the brain, one that an international research team from the Max Planck Institutes for Empirical Aesthetics in Frankfurt am Main (MPIEA) and for Human Cognitive and Brain Sciences in Leipzig (MPI CBS) has now studied in detail. The results of their study have just appeared as an open access article in the journal Cerebral Cortex.

Musical interaction requires flexible coordination between the players, as they need to focus not only on their own instruments, but on the harmony between instruments. Since both are not possible at the same time, they set priorities that can shift while playing depending on the situation. To find out exactly how this process works and which regions of the brain are activated, the researchers invited 40 pianists with classical piano training to play short pieces in duets—one playing the melody with the right hand, the other the bass line with the left.

Brain activity can be localized precisely with functional magnetic resonance imaging (fMRI). This involves study participants lying inside a narrow tube encompassed by a strong magnetic field—circumstances that make it fairly impossible to study pianists playing the piano. However, the scientists had already worked out a solution to this problem in a previous study; in collaboration with the Leipzig-based Blüthner Piano Factory, they had created an MRI-compatible piano with 27 keys that allowed keystrokes to be registered via light cable.

Now, their pioneering invention has been deployed for the first time in a duet: One pianist played the melody of a piece of music in the MRI scanner, while their partner played the bass line on an ordinary piano outside the scanner room. For half of the pieces, the players had practiced both the melody and the bass line beforehand; for the other half, they were unfamiliar with the bass line. Brain activity was measured only for the players in the MRI scanner.

“When the MRI-player knew the bass line, the areas of their brain in charge of motor functions for playing it were active—although it was being played by the partner outside. At the same time, areas of the brain governing hearing were also activated. This means that, in their heads, the pianists weren’t just ‘playing’ the bass line as an accompaniment, they were also ‘hearing’ how it should sound—which of course wasn’t always identical to what their partners outside were playing,” reports first author Natalie Kohler of the MPI CBS.

In addition, the researchers “manipulated” the experiment by giving the pianists different information about tempo, which made them play slightly out of sync. Research team head Daniela Sammler of the MPIEA explains: “When the duet partner played the keys at a different tempo than expected, the cerebellum, which is a strong detector of temporal discrepancies, was activated. This is remarkable because we’re talking about a difference of only a few milliseconds. Which puts us squarely in the high-performance sector here.”

The greater the discrepancy between the part the pianists in the MRI scanner heard in their heads and what their partners outside were actually playing, the more the MRI-pianists focused on themselves, while the outside pianists adapted to them. This distribution of roles corresponds to a generally observed phenomenon: The “weaker” player—i.e., the one playing under more difficult conditions—usually focuses more on their own performance.

Altogether, the study’s findings show how people’s brains make connections between cognitive and sensory factors when they play music together, and that this remarkable feat allows them to adapt their performance to a particular situation.