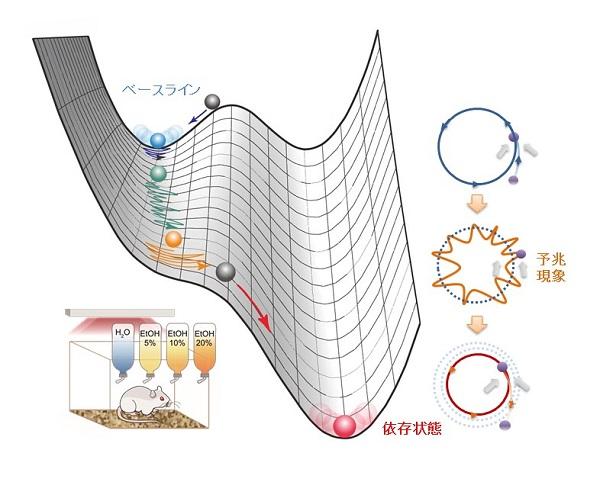 The theory of critical transitions in complex systems (ecosystems, climate, etc.), and especially its ability to predict abrupt changes by early-warning signals based on analysis of fluctuations close to tipping points, is seen as a promising avenue to study disease dynamics. However, the biomedical field still lacks a clear demonstration of this concept. Here, we used a well-established animal model in which initial alcohol exposure followed by deprivation and subsequent reintroduction of alcohol induces excessive alcohol drinking as an example of disease onset. Intensive longitudinal data (ILD) of rat drinking behavior and locomotor activity were acquired by a fully automated drinkometer device over 14 weeks. Dynamical characteristics of ILD were extracted using a multi-scale computational approach. Our analysis shows a transition into addictive behaviour preceded by early-warning signals such as instability of drinking patterns and locomotor circadian rhythms, and a resultant increase in low frequency, ultradian rhythms during the first week of deprivation. We find evidence that during prolonged deprivation, a critical transition takes place pushing the system to excessive alcohol consumption. This study provides an adaptable framework for processing ILD from clinical studies and for examining disease dynamics and early-warning signals in the biomedical field.