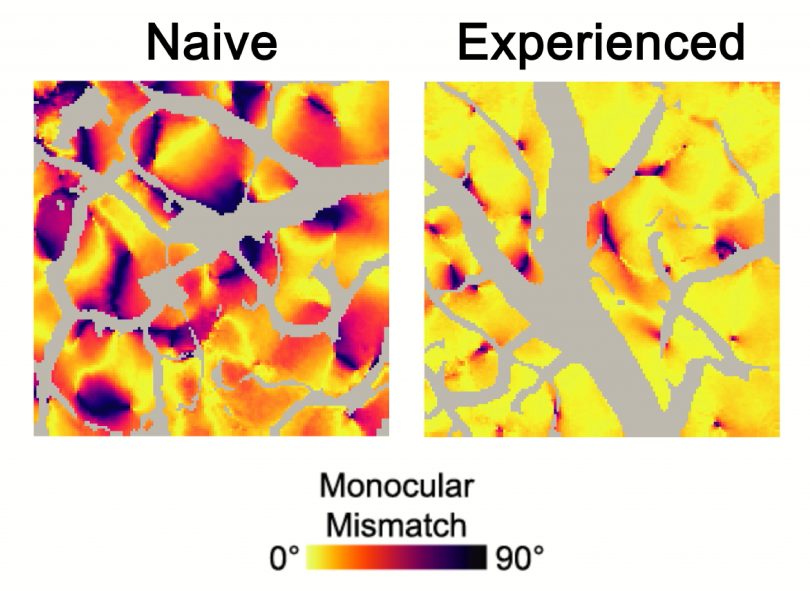 Neural networks in the visual cortex of the brain do a remarkable job of transforming the patterns of light that fall onto the retina into the vivid sensory experience that we call sight. A critical element of this encoding process depends on neurons that respond selectively to different features in the visual scene. Edges and their orientation in space carry an enormous amount of information about the visual environment, and individual neurons in the visual cortex encode this information by responding selectively to a narrow range of edge orientations; some responding maximally to vertical or horizontal, and others to different orientations in between. But neurons in visual cortex face another challenge in representing visual information: They must bring together the signals that originate from the left and right eyes to create a single unified binocular representation. The association of the inputs from the two eyes occurs in the visual cortex and we know that this is achieved with a high degree of precision such that individual neurons respond selectively to the same orientation with stimulation of either the left or right eye. What has been missing is a clear understanding of the developmental mechanisms that are responsible for uniting the inputs from the two eyes, a gap in knowledge that led Max Planck Florida researchers to a series of experiments that have revealed a critical role for early visual experience in guiding the formation of a unified binocular representation.

The first issue that Max Planck scientists Jeremy Chang, David Whitney, and David Fitzpatrick wanted to address is whether alignment of the inputs from the two eyes requires visual experience. Does the brain use vision to align the representations? They approached this question in the ferret, a species that has a well-organized visual cortex with a repeating modular structure in which nearby neurons have similar orientation preferences, resulting in distinct patterns of activity across the cortical surface for different orientations. This makes it possible to use imaging techniques that detect calcium signals to visualize the different modular patterns of activity that are associated with different orientations.  Prior to the onset of visual experience, they found that monocular stimulation produced activity patterns that had all the hallmarks of the mature visual cortex except one: the modular patterns of activity produced by stimulation of the left eye with a single orientation, were different from the modular patterns produced by the same stimulus orientation presented to the right eye. In other words, our brains are capable of developing orderly network representations of edge orientation in the absence of visual experience, but these networks lack the binocular alignment that is seen in mature animals. Additional experiments allowed the investigators to uncover a dynamic process that occurs over a short period of time (7-10 days) in which visual experience drives the alignment of these early representations. Importantly, the period when visual experience is capable of supporting alignment was found to be limited to the first week after eye opening, making it clear that early visual experience is critical for proper development of the circuits that support binocular vision for the rest of life.

Ultimately, these changes in network structure must reflect changes in the response properties of single neurons, and to probe the process of alignment at the cellular scale, they turned to experiments using two-photon imaging that allowed them to visualize the response properties of individual neurons. Consistent with the network representation observations, individual neurons exhibited mismatched orientation preferences for monocular stimulation prior to the onset of visual experience that are rectified by changes in preferred orientation induced by visual experience. The next steps of this project are to investigate network reorganization at the synaptic scale, to identify precisely which components of the cortical network are changing and the mechanisms that enable the change.

A greater understanding of the mechanisms responsible for the experience-dependent alignment of cortical networks is critical for addressing visual disorders that arise from early abnormalities in visual experience such as amblyopia.  But experience-guided alignment of cortical networks is likely critical for a broad range of brain functions—sensory, motor, and cognitive— that are optimized to support effective navigation and interaction with our world. Identifying those aspects of brain circuitry that depend on early experience for proper alignment, and understanding the underlying alignment mechanisms could offer insights into a host of neurodevelopmental disorders whose causes are still largely unknown.

This work was supported by the Max Planck Florida Institute for Neuroscience and the National Eye Institute of NIH. The content of this article is solely the responsibility of the authors and does not necessarily represent the official views of the funding agencies.