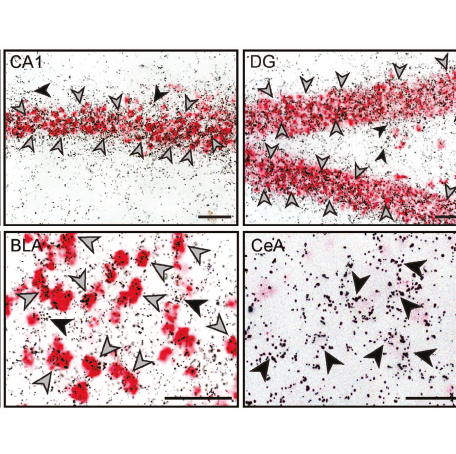 Glucocorticoid receptor (GR) is expressed in neurons of the major excitatory and inhibitory neurotransmitter systems within the brain.

Anxiety disorders constitute a major disease and social burden worldwide; however, many questions concerning the underlying molecular mechanisms still remain open. Besides the involvement of the major excitatory (glutamate) and inhibitory (gamma aminobutyric acid (GABA)) neurotransmitter circuits in anxiety disorders, the stress system has been directly implicated in the pathophysiology of these complex mental illnesses. The glucocorticoid receptor (GR) is the major receptor for the stress hormone cortisol (corticosterone in rodents) and is widely expressed in excitatory and inhibitory neurons, as well as in glial cells. However, currently it is unknown which of these cell populations mediate GR actions that eventually regulate fear- and anxiety-related behaviors. In order to address this question, we generated mice lacking the receptor specifically in forebrain glutamatergic or GABAergic neurons by breeding GRflox/flox mice to Nex-Cre or Dlx5/6-Cre mice, respectively. GR deletion specifically in glutamatergic, but not in GABAergic, neurons induced hypothalamic–pituitary–adrenal axis hyperactivity and reduced fear- and anxiety-related behavior. This was paralleled by reduced GR-dependent electrophysiological responses in the basolateral amygdala (BLA).

Importantly, viral-mediated GR deletion additionally showed that fear expression, but not anxiety, is regulated by GRs in glutamatergic neurons of the BLA. This suggests that pathological anxiety likely results from altered GR signaling in glutamatergic circuits of several forebrain regions, while modulation of fear-related behavior can largely be ascribed to GR signaling in glutamatergic neurons of the BLA. Collectively, our results reveal a major contribution of GRs in the brain’s key excitatory, but not inhibitory, neurotransmitter system in the regulation of fear and anxiety behaviors, which is crucial to our understanding of the molecular mechanisms underlying anxiety disorders.