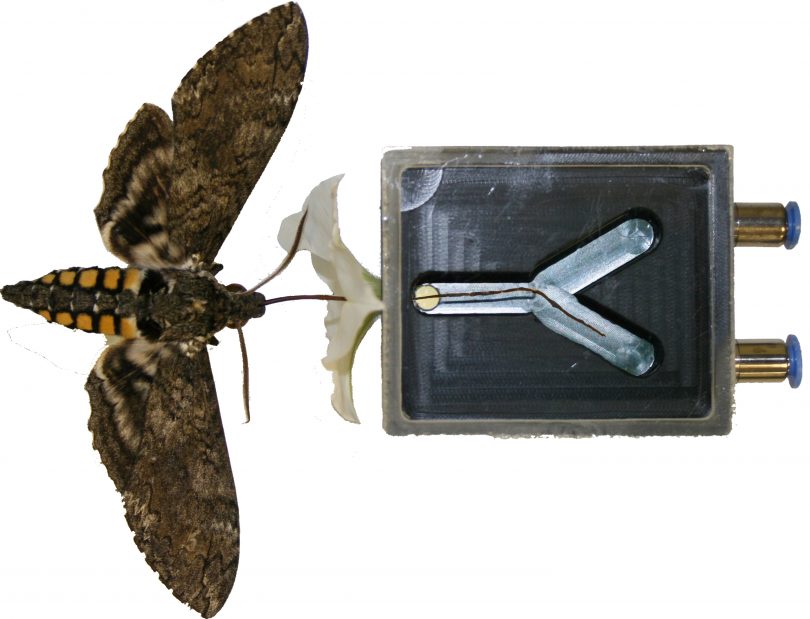 Behavioral experiment with a hawk moth: A choice assay was set up in order to find out whether floral volatiles influenced how long a moth kept its proboscis inside a flower. At the same time, antennal olfaction (the moth’s antennae are its actual “nose”) was excluded. In the upper part of the y-maze, no odor was introduced; the lower part contained floral volatiles. The moth kept its proboscis much longer in the parts of the flower that had a scent. Therefore the hawk moth Manduca sexta seems to be using its proboscis to smell.

Using olfactory neurons on their proboscis, moths weigh which flowers to visit

Flowers without scent produce fewer seeds, although they are visited as often by pollinators as are flowers that do emit a scent. Scientists from the Max Planck Institute for Chemical Ecology in Jena, Germany, made this surprising observation, when they studied tobacco plants that have been silenced in their ability to produce floral volatiles. The researchers showed that floral scent is crucial for successful pollination: Manduca sexta hawk moths, the most important pollinators of the wild tobacco species Nicotiana attenuata, use their proboscis to smell the floral volatiles when they visit flowers. The olfactory neurons involved in the perception of these volatiles have now been discovered to be located on the Manduca proboscis. Only when flowers produced volatiles did the moths stay long enough to drink nectar, and only when they stayed long enough did they deliver enough pollen on their proboscis to successfully pollinate other scenting flowers. These results have now been published in the journal eLife (eLife, May 2016, DOI: 10.7554/eLife.15039).

Until now, scientists thought that flowers which don’t produce floral volatiles are invisible to nocturnal pollinators, such as hawk moths. Such “deceptive flowers” might benefit from neighboring, scenting flowers. Plant fitness studies have confirmed that scenting flowers produce significantly more seeds than do non-scenting flowers. Conducting semi-natural tent experiments with plants of the wild tobacco species Nicotiana attenuata, Danny Kessler and Felipe Yon along with their colleagues from the Department of Molecular Ecology were surprised when they observed that non-scenting flowers were visited by tobacco hawk moths (Manduca sexta) as often as were scenting flowers. Yet those without scent had fewer seeds, so the question is why is that the case. What role did the pollinators play, especially with regards to their ability to perceive flower odors? The ecologists asked their colleagues for help: Markus Knaden and Alexander Haverkamp from the Department of Evolutionary Neuroethology, who study odor-guided behavior in insects.

The behavioral scientists had already gained experience in behavioral assays with moths. For this particular research problem they developed a so-called y-maze experiment, a proboscis choice test in which a y-shaped tube system is used as an extension of the flower’s corolla. The insect must decide which of the two tube endings it will enter with its tongue, the so-called proboscis (see graphic). One of the endings contained floral volatiles, whereas the other did not. The behavior of the moth was recorded in a wind tunnel experiment. This choice test revealed that the moth’s proboscis remained much longer in the part of the “flower” that smelled than in the other part. This result was especially interesting, because the experimental set-up ensured that the antennae, the actual “nose” of the moth, were excluded from the odor source. Knaden explains: “Due to the length of the tongue, the antennae of the moths are quite far away when the moths are inserting it into the flower. Moreover, they are exposed to the wind caused by the flapping wings, which makes it even more difficult to perceive odors emitted by the flower.” So how are the moths able to smell the presence of floral volatiles?

Using molecular biology techniques the scientists identified the Manduca sexta genes which were active on the proboscis of the moth. Among these activated genes were those of two olfactory receptors: the olfactory co-receptor ORCO and the ionotropic co-receptor IR25a. The ORCO gene was active only on the tip of the proboscis, whereas the IR25a gene was also active in the organ’s upper parts. These findings show that the proboscis plays a much more important role in olfaction than previously thought.

When scrutinizing electron microscopic images of the tip of the proboscis, the researchers discovered a sensillum, a sensory hair previously unknown in Manduca sexta. “Single Sensillum Recording”, a method which measures the response of single sensory hairs to certain odors, revealed that the proboscis sensillum responds to floral volatiles. Apparently, the hawk moth is able to smell floral scent with the tip of its tongue, Haverkamp, one of the first authors of the study, notes this surprising result: “Our study shows that the function of the proboscis is much more complex than was previously thought. Earlier studies indicated that the proboscis of most insects can only detect basic taste categories such as sweet or bitter. Now it is clear that insects can also smell specific chemical compounds with their tongue.”

Pollinators, unfortunately, cannot directly perceive how much nectar is available in an individual flower. However, floral scent is an important indicator of the presence of nectar because it provides information about the age and physiological activity of a flower, which is strongly correlated with its nectar production. Hence, moths which correctly locate flower volatiles are also more likely to select flowers which contain enough nectar. On the plant’s side, the presence of floral scent increases the fitness of individual flowers for two reasons: Scenting flowers are more likely to be perceived by pollinators than are non-scenting flowers, and floral volatiles increase the success of the hawk moths’ foraging efforts and thus its eventual reproduction. Kessler, the leader of the study, summarizes the results this way: “Insects have developed incredible sensory capabilities in order to cope with their environment. Studies on the ecology of flowers have underestimated the capabilities of pollinators for a long time. The evolution of flowers is tightly linked to the evolution of pollinators. By learning more about the postmen of the pollen we learn more about the evolution and the functions of plants floral traits as well.”