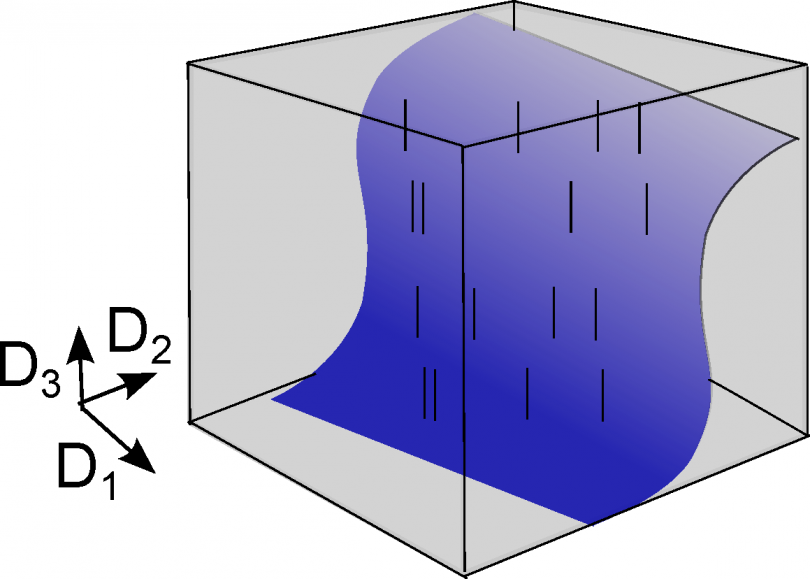 In many situations, it is sufficient to consider the space of pairwise spike correlations (here schematically depicted in blue) to understand neural information, without the need to evaluate all possible spike combinations (gray).

Neurons communicate via spikes but how they use those short pulses to code information is still an open question. Recent work at the Max Planck Institute for Brain Research (Theory of Neural Dynamics Group) reveals that by determining temporal pairwise correlations one can get closer to answering this question.

A key to understanding how the brain works is revealing the set of rules neurons use to communicate information between one another. The main means of neural communication are spikes, which are brief electrical pulses send out at some specific times. A spike train generated by a neuron can be considered a long binary pattern where “1” denotes a spike and “0” its absence. How much information about the input can be recovered by observing spike trains which look for example like 00010100…? How many combinations of 0’s and 1’s should be studied to “decode” the input message of a neuron? Especially the latter question is not trivial because nearly infinitely many combinations of 0’s and 1’s are possible. Tatjana Tchumatchenko and her team now present a theoretical approach showing that only a limited number of binary patterns is required and that correlations between pairs of spikes (between the time points of two “1”s) are key to solve the code in single neurons. Their findings have been published in Nature Communications.