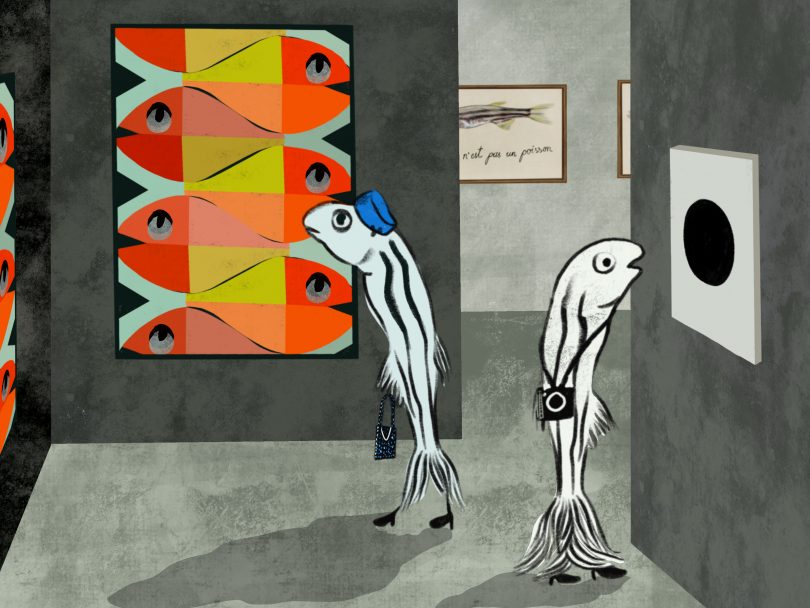 Neurobiologists show in zebrafish that a simple dot, animated in specific way, is sufficient to trigger shoaling. © MPI of Neurobiology / Kuhl

What does it take for a fish to recognise another fish? Scientists from the Max Planck Institute of Neurobiology in Martinsried show, that a simple dot, animated in specific way, is sufficient to trigger shoaling.

When flocks of birds or shoals of fish perform their graceful ballet, it seems miraculous that these numerous animals do not collide. A few basic rules for avoiding such collisions are known: “Move away when your neighbour gets too close” or “Approach when the neighbour is too far away”. But even the preceding step has remained unclear until now, namely how animals recognise a neighbour as belonging to their own species.

Shape, colour, smell, sound and a whole range of other factors may play a role. For a long time, biologists had assumed that conspecific animals recognise each other, in a holistic fashion, based on a combination of characteristics. Experiments performed with zebrafish in virtual reality have now shown that a fish-like motion pattern alone can convince a fish that it is in the presence of a member of its own species.

Zebrafish begin to form shoals with conspecifics when they are between 10 and 20 days old. The bigger the group, the stronger the attraction. Johannes Larsch from the Max Planck Institute of Neurobiology built a virtual environment for free-swimming zebrafish to find out which visual cues are critical for fish to enter a shoal. This experiment revealed which digitized patterns the fish were interested in and which they did not care about. Surprisingly, a simple black dot was sufficient to attract a young zebrafish within just a few seconds – provided that the dot was animated in a specific way.

If the dot moved in swimming bouts, characteristic of a young zebrafish, other properties such as shape or colour became redundant. In this case, it also did not matter, whether the dot “reacted” to the movements of the fish, or whether it moved independently. The fish then followed the moving dot around for hours. “This means that the visual trigger for shoaling behaviour of young zebrafish is much simpler than previously thought,” Johannes Larsch sums up. “In fact, it is so simple that complex swarm behaviour may well be the result of a chain of visual reflexes.”

Fish that had grown up in isolation also shoaled with the moving dot. The behaviour is therefore likely instinctual. It thus appears that the animals have an innate “mental concept” of what their own movements look like. “This is an important insight, as the recognition of social signals is an accomplishment of the brain that is necessary for survival,” explains Herwig Baier, in whose laboratory these experiments were carried out. “A deficit in these processes also plays a critical role in psychiatric diseases such as autism and schizophrenia, which we know very little about.”

For the first time now, scientists have discovered a simple visual signal that triggers social behaviour. This discovery opens up new avenues for the unravelling of the neuronal and genetic mechanisms underlying social recognition.