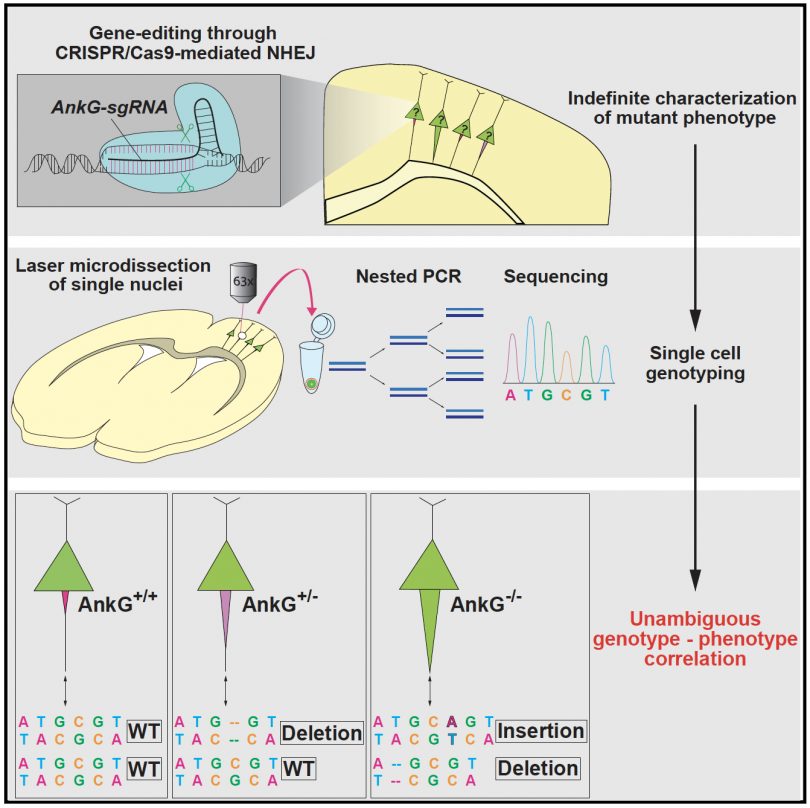 CRISPR/Cas9-based mutagenesis through NHEJ causes a variety of genotypes in individual cells, which make it difficult to determine the causality between genotypes and phenotypes. Steinecke et al. report a strategy for single-cell genotyping in CRISPR/Cas9-transfected neurons that were phenotypically characterized in vivo.

CRISPR/Cas-based technologies have revolutionized genetic approaches to addressing a wide range of neurobiological questions. The ability of CRISPR/Cas to introduce mutations into target genes allows us to perform in vivo loss-of-function experiments without generating genetically engineered mice. However, the lack of a reliable method to determine genotypes of individual CRISPR/Cas-transfected cells has made it impossible to unambiguously identify the genetic cause of their phenotypes in vivo. Here, we report a strategy for single-cell genotyping in CRISPR/Cas-transfected neurons that were phenotypically characterized in vivo. We show that re-sectioning of cortical slices and subsequent laser microdissection allow us to isolate individual CRISPR/Cas-transfected neurons. Sequencing of PCR products containing a CRISPR/Cas-targeted genomic region in single reference neurons provided genotypes that completely correspond with those deduced from their target protein expression and phenotypes. Thus, our study establishes a powerful strategy to determine the causality between genotypes and phenotypes in CRISPR/Cas-transfected neurons.