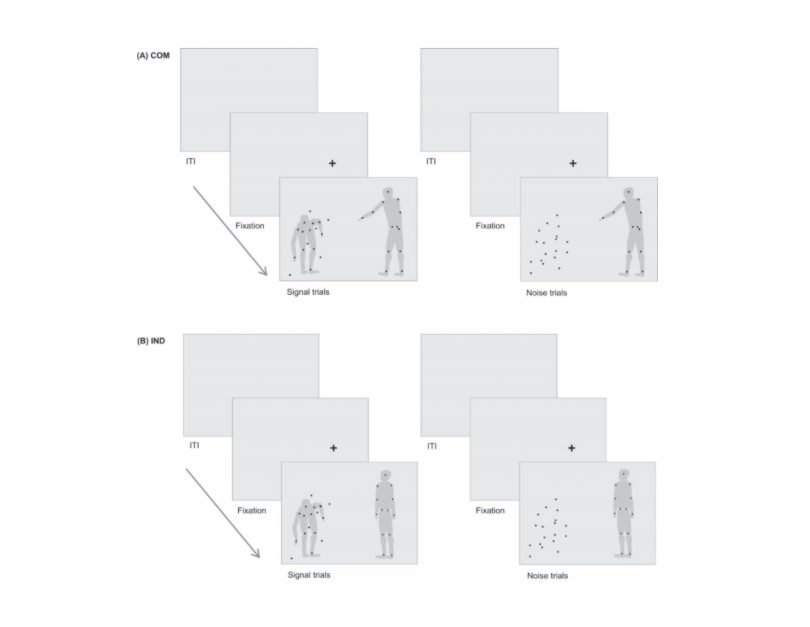 Interpersonal predictive coding (IPPC) describes the behavioral phenomenon whereby seeing a communicative rather than an individual action helps to discern a masked second agent. As little is known, yet, about the neural correlates of IPPC, we conducted a functional magnetic resonance imaging study in a group of 27 healthy participants using point-light displays of moving agents embedded in distractors. We discovered that seeing communicative compared to individual actions was associated with higher activation of right superior frontal gyrus, whereas the reversed contrast elicited increased neural activation in an action observation network that was activated during all trials. Our findings, therefore, potentially indicate the formation of action predictions and a reduced demand for executive control in response to communicative actions. Further, in a regression analysis, we revealed that increased perceptual sensitivity was associated with a deactivation of the left amygdala during the perceptual task. A consecutive psychophysiological interaction analysis showed increased connectivity of the amygdala with medial prefrontal cortex in the context of communicative compared to individual actions. Thus, whereas increased amygdala signaling might interfere with task-relevant processes, increased co-activation of the amygdala and the medial prefrontal cortex in a communicative context might represent the integration of mentalizing computations.