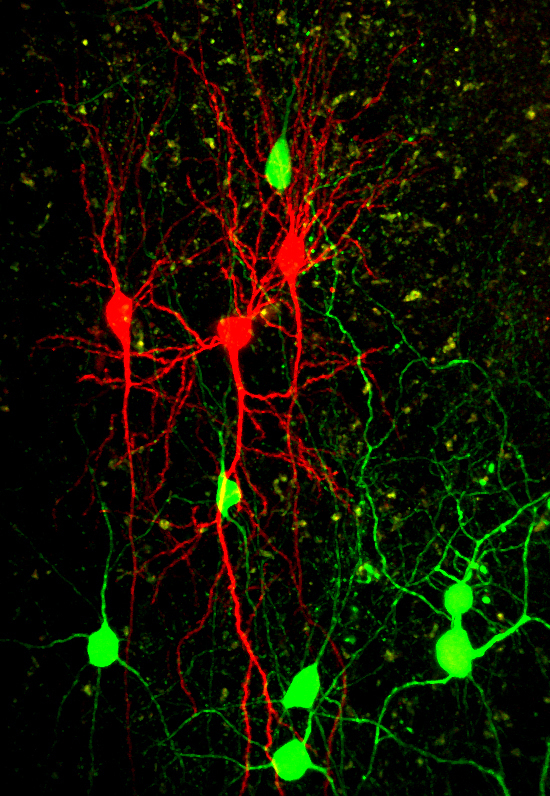 Inhibitory nerve cells (green) can use individual synapses to modulate or block signal processing in cells in the cerebral cortex (red). © MPI for Neurobiology / Müllner

Nerve cell signals can be modulated and blocked by individual contacts

In our brain, information is passed from one cell to the next via trillions of synapses. However, optimal data flow is not just about the transfer of information; its targeted inhibition is also a key factor. Scientists from the Max Planck Institute of Neurobiology in Martinsried have now been able to show in mice that even individual inhibitory synapses can have a major influence on signal processing. The study provides an important piece in the puzzle for understanding this fundamental brain function, which is also a factor in a number of illnesses.

The human brain is made up of around 100 billion nerve cells, each of which is connected to other cells by several hundred to thousands of synapses. Apart from our organ and physiological functions, the way we think, act and feel are controlled by the synaptic transmission of information – many quadrillion impulses occur every second. Excitatory synapses that pass the information between cells and inhibitory synapses that limit and change the flow of information are needed for this huge flow of data to run on regulated tracks.

Scientists from the Max Planck Institute of Neurobiology have now been able to show in mice that even individual inhibitory synapses have a significant influence on signal processing in the dendrites of other cells. The neurobiologists examined the effect of dendritic inhibition on nerve cells in the hippocampus, the area of the brain in which for example short-term memories are converted into long-term memories. The researchers used a finely-tuned combination of different methods to observe under the microscope how individual inhibitory synapses significantly changed the strength and propagation of a signal in the inhibited nerve cell. The results show that the amplitude of nerve cell signals can be regulated by inhibitory synapses with a precision of a few milliseconds and micrometres.

It was known that inhibitory nerve cells fulfil a very fundamental function in the brain. “But the fact that individual inhibitory synapses play an important role and have such a precise effect really fascinated us”, explains Fiona Müllner, lead author of the study which has now been published. Building on their results, the scientists used a model to show how individual inhibitory synapses could control even synaptic plasticity, the basis for learning and memory. “Naturally, we are now interested particularly in what effects such a precise inhibition has on the storage of information in the nervous system”, adds Tobias Bonhoeffer who, with his Department at the Max Planck Institute of Neurobiology, is investigating the bases of synaptic plasticity.