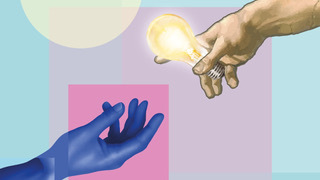 Moments of creative inspiration—an evoked state of motivation for creative activity—form a distinct step in creative processes. We hypothesize that the psychological state of being creatively inspired is similar to the state of being aesthetically moved, and that aesthetically moving experiences can serve as prompts for creative inspiration. We tested this hypothesis in a creative writing task: In Experiment 1, 25 participants from the general public were asked to write 12 short creative vignettes (repeated measures) in response to either “aesthetic” prompts (visual artworks they had rated highly aesthetically moving in a preceding task) or “non-aesthetic” prompts (triads of unrelated words). People then rated how inspired they had felt during idea generation. Ratings of inspiration were significantly higher for aesthetic versus nonaesthetic prompts. In Experiment 2, 34 participants performed the same task with prompts consisting of highly moving artworks, nonmoving artworks (rated in a preceding task), or novel artworks not seen in advance. While preexposure to the stimuli had no significant effect, felt inspiration was significantly higher for moving versus nonmoving prompts, and posttest aesthetic ratings of novel artworks were positively correlated with felt inspiration. Furthermore, inspiration ratings correlated positively with the amount of produced text. Being aesthetically moved increases the likelihood of creative inspiration, a finding with implications both for the study of creative and aesthetic processes and also for the potential role of the arts in educational settings.