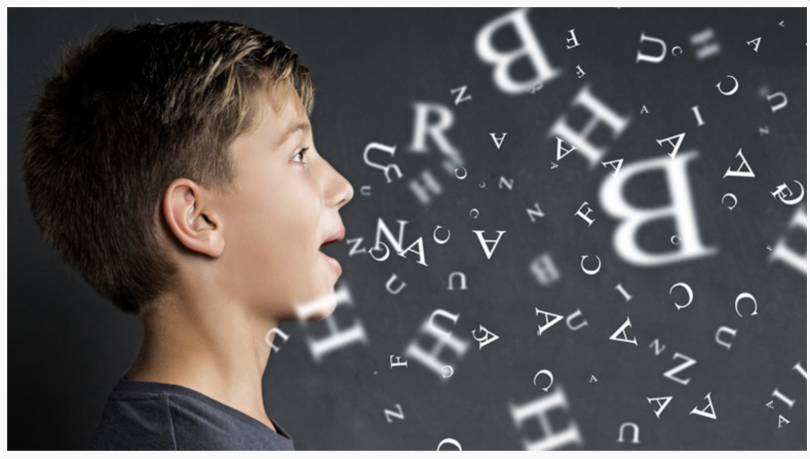 How universal language development is – from the crying and babbling stages to the acquisition of the first words and syntactic rules to the processing of complex sentence structures – can be marvelled at in children in particular. Every child can effortlessly learn any language of the world in the culture they are born into. © fotolia/lassedesignen

The ability to produce and understand language makes humans unique. Not just humans but also monkeys and dogs can learn words. What is the key difference to our human language? And how does this medium in which we speak, write, think and write poetry actually develop?

It is language that characterizes humans. Some people may counter at this point by pointing out that other species also communicate with one another. That’s true. In fact, a wide range of species can exchange information with one another in many ways. They can even learn individual symbols or words as designations for different things and objects. Dogs and great apes, above all, demonstrate impressive capabilities in this respect. But what they learn is an association between a particular abstract symbol or an acoustic word form and an object – for example, the word ‘car’ and a real vehicle. They therefore learn each ‘word’ through associations individually.

The ability to learn words is not what constitutes human language. So what is it then? It is the faculty to combine words according to specific rules. Loosely strung together words do not produce language. They only convey a meaning when they are put together according to a defined set of rules. In contrast, great apes are not able to learn grammatical rules corresponding to those of a language.

Let us take a list of words as an example. Sleep, green, colourless, furious, idea. Combined according to the rules of English grammar, we could form the sentence “colourless green idea sleeping furiously”. This sentence is grammatically correct and can be processed because it follows the rules of the language, but it does not make sense. It is not just the order in which we string words together, how we interpret them is also a decisive factor. Sentence construction, the syntax, is therefore just one aspect of language. Equally important is the meaning of the individual words, the semantics. We can give this sentence a meaning by making a few small changes: “Some colourless green ideas are sleeping furiously in my head,” for example. How each person now interprets this sentence is dependent upon their individual knowledge about the meaning of words, which they have stored in their brain’s mental lexicon.

From babbling to complex sentences

Despite these apparent limitations imposed upon our language by this set of rules, the range of possibilities for conjuring up language from words is inexhaustible. However, as impressive as such infinite scope might be, the journey that our linguistic system in the brain undertakes before reaching full maturity is a long one. As thrilled as parents are when their little ones utter their first words – be it ‘ma-ma’ or ‘pa-pa’ – it also becomes patently clear in that moment what quantum leaps they have to take in order to later understand and interpret complex sentences. Some of these steps are taken in no time at all, while others take years. 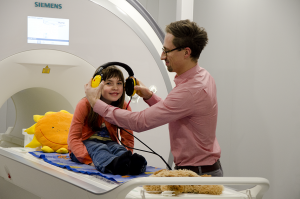 With the help of a model brain scanner, a young volunteer is preparing for the experiment. Michael Skeide, researcher at the Child Language Laboratory of the Max Planck Institute for Human Cognitive and Brain Sciences explains the test to the child to ensure that actual measurements go smoothly.

Even three-year-olds possess such extensive vocabulary that they can easily understand simple sentences. “Der Fuchs jagt den Igel” (The fox hunts the hedgehog), for example. Young children nevertheless face a real obstacle when the sentence deviates from its most basic structure. If you wish to emphasise that it is a hedgehog and not a bird, for example, that the fox is hunting, the German sentence is inverted accordingly: “Den Igel jagt der Fuchs”. Misunderstandings are then inevitable. The young speakers still rely subconsciously on the assumption that the subject, the hunting fox, should appear before the object, the hunted hedgehog, in the sentence. On the other hand, children already subconsciously register that the article “den” somehow does not match the subject and does not belong at the start of the sentence. Only the developed brain is able to easily process the changed order of the sentence components.


Why is that? Why are we able, on one hand, to distinguish between vowels while still in the womb but unable to understand more grammatically complex sentences until the age of seven at the earliest, even if they are made up of simple words?

The brain also has to develop

In short: good things take time. The brain and its individual cerebral areas responsible for language develop at different speeds. Some areas only gradually develop their network to other areas so that information can then be exchanged with increasing speed and effectiveness.

One area that abounds with activity from the start, even before birth, is Wernicke’s area in the left temporal lobe of the cerebrum, which matures at an early stage in development. Not only does this cerebral area help us to distinguish between sounds like “ma” and “pa” at high speeds of 0.2 to 0.5 seconds very early on, it also decides for us whether a string of syllables constitutes a word and is therefore worth continuing to focus on. Simple sentences made up of a few words can also already be processed here. Wernicke’s area is the epicentre of our language until around the age of three.

Only from this age does a second central language area gradually come into play – Broca’s area in the front area of our cerebrum, which primarily focuses on the processing of complex language. It receives pre-sorted information from the temporal lobe and gives an overall meaning to the words individually put together. Meaningful sentences are thus constructed from separate raw information. As the neurons are increasingly connected here, even more complex formulations become easy as we get older.

We are increasingly able to make ground with the increased level of difficulty of complex sentences as our Broca’s area is activated more intensively than with simple sentences. But this is not the only reason. The pathway between the two main players in language processing – Wernicke’s area and Broca’s area – plays a major role. This bundle of nerve fibres, the arcuate fasciculus, takes a particularly long time before becoming fully functional. This is because it slowly forms a thick myelin layer around each of its fibres. It takes many years, but is ultimately more effective. In a similar way to plastic around the copper wire of a power cable, myelin ensures that the electrical signals are transmitted with the least possible loss and at high speed. The latest studies have shown the thicker the myelin layer is around this high-speed cable, the quicker complex sentences are processed. It therefore takes until around the end of puberty before more complicated formulations can be processed just as quickly as simple ones – irrespective of whether the hedgehog, as the object, is placed in the first or last position in the sentence.

Watching the brain during speech

We owe these findings to one thing in particular to a large extent – the new technical innovations of recent years, especially functional magnetic resonance tomography (fMRT). This enables us to practically watch the brain during speech. As the procedure makes use of the different magnetic properties of blood low and rich in oxygen, it shows us activated brain areas through which oxygen is flowing. This represented a major step forward, up to this point, conclusions on how the brain functions were mainly drawn from the example of patients with specific malfunctions and the examination of the brain after their death.

And even after the development of these new methods, they were almost exclusively restricted to studies on adults until recently. The key factor in producing meaningful results is that the probands do not move their heads during the language tests in the tomograph, something well known to be especially difficult for children. At the Max Planck Institute for Human Cognitive and Brain Sciences, we have nevertheless succeeded in developing methods that provide us with a view into the child’s brain – even that of three-year-olds – while they are processing language. Our idea: to combine pleasure with benefit. We practice keeping still with little ones, for example, by showing them a cartoon beforehand which they can watch without interruption if they keep their head still. If the cartoon is exciting, this method works.

The universality of this biological programme – from the crying and babbling stages to the acquisition of the first words and syntactic rules to the processing of complex sentence structures – can be marvelled at in children in particular: each child can effortlessly learn any language of the world in the culture they are born into. After birth, they are initially receptive to any language but then specialize according to their respective linguistic environment. In the first months of life, all children worldwide still recognize sound differences in the same way regardless of whether they are of significance in their mother tongue or not. Later they can only distinguish between those that are relevant in their mother tongue. A well-known example is the difference between the speech sounds ‘r’ and ‘l’, which is important in German to separate ‘Rast’ from ‘Last’, but not in Japanese. The Japanese therefore lose the ability to differentiate between these speech sounds. In other languages, other sounds are insignificant and are also lost.

The medium in which we speak, read and write, think and write poetry, e-mail and tweet is ultimately a specific human natural and cultural product of a neuron bundle interconnected in a complex way. A bundle that develops according to a predefined biological programme, but which clearly emerges under the influence of the cultural environment in which we grow up and live. Only by exploring both aspects – the natural and human science aspects – can a deeper understanding of language be achieved.