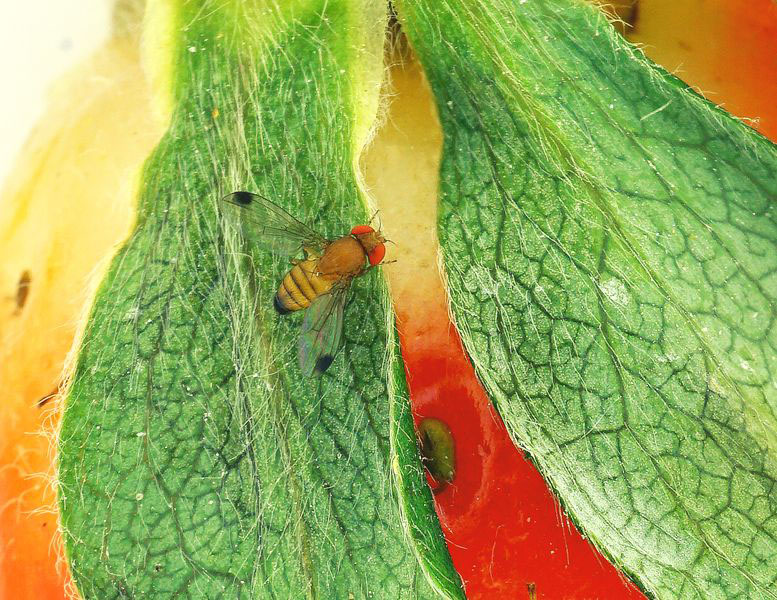 Male Drosophila suzukii: Males can be easily distinguished from many other closely related species by the dark spots at the tips of their wings.

In 2014, more spotted-wing Drosophila suzukii than ever before were observed in Germany. This pest lays its eggs in fresh and ripening fruits before they are harvested. Infested fruits are often additionally infected with bacteria and fungi, and become unsuitable for sale and further processing. Currently, the only way to effectively control this pest insect is through the use of insecticides. Scientists at the Max Planck Institute for Chemical Ecology have now identified a leaf odor which is highly attractive to Drosophila suzukii. Beta-cyclocitral lures the spotted-wing drosophila but no other related drosophilids. The researchers were able to measure the olfactory specialization of the insect to this leaf odor on the basis of the response of a certain sensillum. (Journal of Chemical Ecology, February 2015)

The spotted-wing drosophila Drosophila suzukii originated in Asia and belongs to the family of vinegar flies. Its relative is Drosophila melanogaster, the common vinegar fly, which is widespread in our regions and can be found in large numbers on overripe and rotting fruits in the summer months. Whereas D. melanogaster is a nuisance but not a real pest, D. suzukii can cause considerable damage in orchards and vineyards. Unlike the common vinegar fly, D. suzukii lays its eggs in healthy and ripening fruits before they are harvested. Often, fungi and bacteria are also transmitted. In 2011, the pest was first detected in Germany. In the summer and fall of 2014, for the first time, vineyard owners in Germany had to use insecticides to fight the pest. Vinegar traps for monitoring D. suzukii infestation are not really helpful as the traps attract other drosophilids, and checking whether D. suzukii has been trapped is very time-consuming. Ian Keesey and his colleagues in Bill Hansson’s Department of Evolutionary Neuroethology at the Max Planck Institute for Chemical Ecology wanted to find out if there is any odor which attracts only D. suzukii. At the center of their investigation was also the question of how D. suzukii developed its preference for fresh fruits and how this specialization could be traced physiologically in the insect’s olfactory system.

Behavioral assays revealed that this fly was considerably more attracted by leaf tissue than were all other tested fly species. The researchers therefore examined the responses of single sensory hairs (sensilla) in different drosophilids to a large variety of ecologically relevant odors, including many leaf odors. The coupling of sensory physiology (single-sensillum derivatives) and gas chromatography allows for the examination of individual sensilla, while numerous odors found in a fruit or a leaf are tested by means of gas chromatography simultaneously. By using this technique, the researcher identified a substance which attracted only D. suzukii, the leaf odor beta-cyclocitral. In addition, the pest insect also responded more strongly to odors that were emitted by the plant during early stages of fruit ripening and less strongly to substances found in fermenting fruits (such substances are often used as baits for vinegar flies).

Interestingly, it is one single sensillum type, the so-called ab3 sensillum, that responds explicitly to this odor: “We were amazed that it was again the ab3 sensillum that showed specific responses. Whenever flies occupy a new food niche, the demands on their olfactory system change. They must be able to smell new odors and ignore smells that had been attractive in the past. It is the ab3 sensillum that changes its response spectrum,” Markus Knaden, leader of the project group “Odor-guided behavior in insects”, explains. The ab3 sensillum seems to play a particularly important role when it comes to the insect’s search for food or the best oviposition site. However, that D. suzukii is attracted by leaf tissue but nevertheless lays its eggs in ripening fruits is quite unusual. For oviposition, the females use their strikingly long and serrated ovipositor to pierce the skin of fruits and berries and deposit their eggs. “D. suzukii may act as an evolutionary bridge between fruit-centered and herbivorous species within the Drosophila family,” says Ian Keesey, first author on the study. Ripening fruits and berries are mostly surrounded by leaves. Attracted by leaf odors, D. suzukii flies are automatically guided to the vicinity of fruits; visual cues may then help to finally pinpoint the fruits.

By investigating D. suzukii’s olfactory specialization, the scientists want to better understand why some insect species become pests, while others don’t. In this case, they want to find out why and how this fly has specialized on ripening, healthy fruits and adapted its odor sensitivity accordingly. Their research results may help to develop more efficient traps in order to simplify Drosophila suzukii monitoring and to better keep this pest in check. 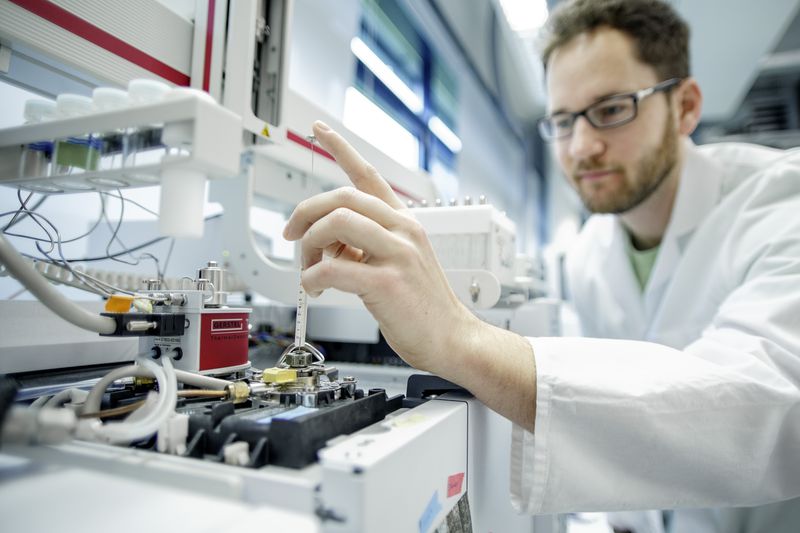 Ian Keesey is injecting a headspace odor collection sample from plant tissue into the GC-MS for separation, analysis and identification. Photo: Anna Schroll