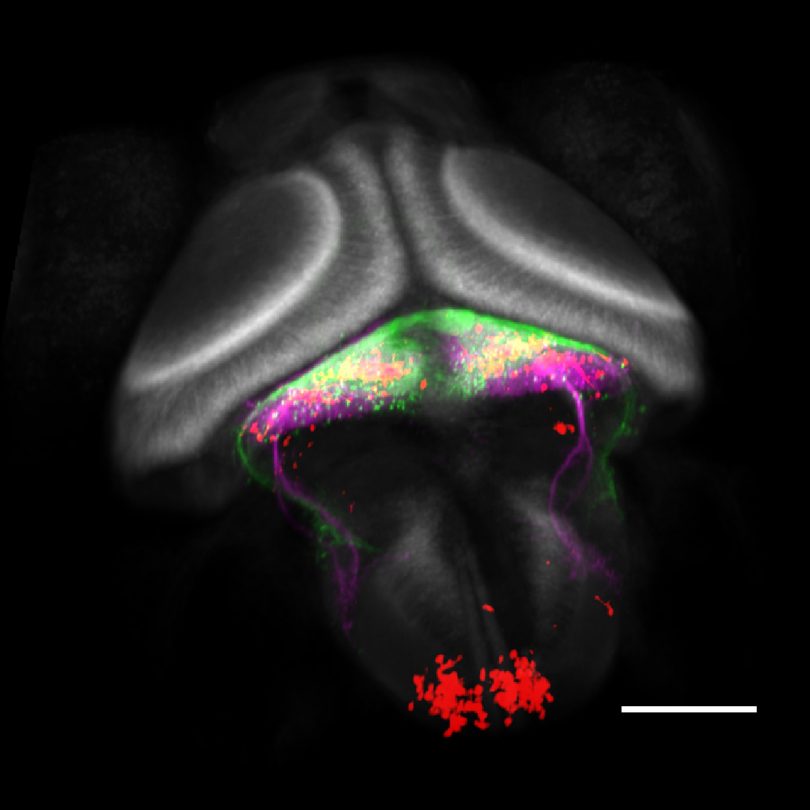 The cerebellum has a stereotypical three-layered configuration, which is conserved from fish to mammals. In the larval zebrafish brain (in grey) the granule cell layer (green) sends parallel fibers to the molecular layer, where they contact the dendrites of the Purkinje cells (magenta). Inferior olivary neurons (red) also provide inputs to the Purkinje cells. Scale bar = 100 microns; the head of the fish is oriented towards the top of the image. (c) MPI of Neurobiology / Knogler

In order to successfully survive in a changing environment, animals must be able to combine sensory inputs with information about their own movement. Complex motor behaviors, like walking or riding a bike, would be difficult to perform without feedback signals such as the sense of the feet touching the ground or the perception of movement with respect to the world. Scientists from the Max Planck Institute of Neurobiology in Martinsried use zebrafish as a simple vertebrate model to study how different kinds of sensory and motor information map onto the cerebellum. Their recent study shows that scientists need to rethink about how this large and important part of the brain of all vertebrates, including humans, works.

All vertebrates have a cerebellum. The importance of this brain area is underlined by the fact that more than half the neurons in the vertebrate brain are cerebellar granule cells. The cerebellum’s tasks include motor coordination, the acquisition of motor skills, the calibration of reflexes, various modes of learning, and possibly even higher cognitive processes such as emotion. Although the cerebellum’s involvement in all these phenomena is known, it is still uncertain how information from different sources is organized upon arrival into the cerebellum and integrated by individual granule cells. This is despite scientists having a very good understanding of the architecture of the cerebellum – that is, what neurons there are and how they are connected.

The main input layer of the cerebellum consists of the granule cells. These are believed to convey information about external stimuli, current body position and recent motor output. However, despite being the most numerous neuron type in the vertebrate brain, it has been very difficult to record the activity of the cells. This is due to the fact that in small mammals such as mice, the brain contains hundreds of thousands of granule cells spread over a large area, therefore only a small fraction can be monitored at any given time in one animal. 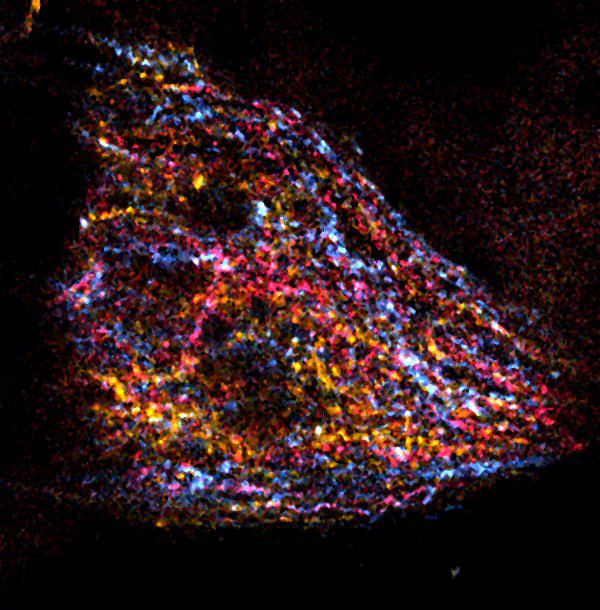 In a recent study published in the journal Current Biology, Laura Knogler and her colleagues from the Portugues group at the Max Planck Institute of Neurobiology used small translucent larval zebrafish to record cerebellar activity. For the first time, scientists were thus able to record from all the granule cells in the cerebellum of an awake, behaving vertebrate. As Laura explained: “This is possible because the brains of these fish are small, less than 1 mm cubed, and because we can express fluorescent proteins in their brains that light up when neurons are active.” When asked to summarize the main findings, Laura continues: “We were surprised to see that a large fraction of the cerebellar granule cells, nearly 50%, were active when we presented simple sensory stimuli such as light flashes or moving scenes. Some neurons were only active when the fish swam.”


Ruben Portugues, the head of the lab, explains why these results were so unexpected: “It has been believed since the early 1970’s that individual sensory stimuli will activate only very few granule cells. That is not what we find.” The scientist continues to explain that there is still a lot to learn about how granule cells encode sensory stimuli and motor actions: “Our results, together with some beautiful recent studies on granule cells from other groups, force us to think again about the cerebellum.”

Although the behavioral repertoire of the larval zebrafish is much reduced compared to that of higher order vertebrates such as mammals, the structure of the cerebellum is highly conserved. The larval zebrafish with its smaller sized brain and available experimental methods is thus an ideal model towards the ultimate goal: to understand the general principles of how the cerebellum works. As a next step, the labs’ researchers therefore intend to investigate how the granule cells help to coordinate the movement of zebrafish in real-time. For this, they are going to employ virtual-reality experiments where the environment changes in response to the fish’s behavior.