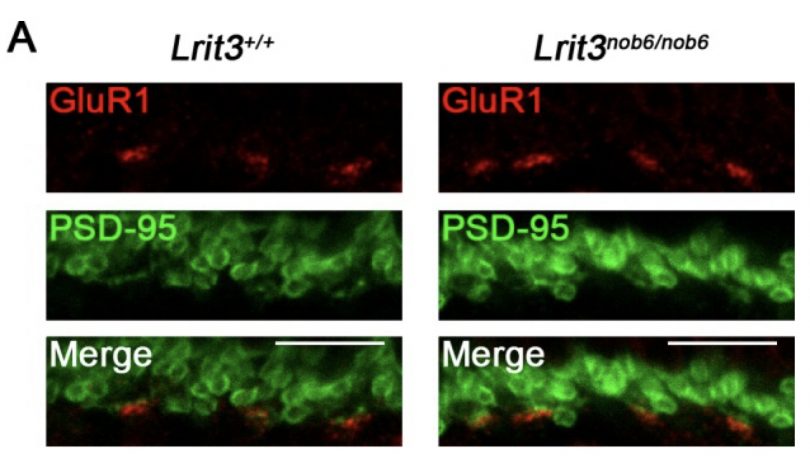 Mutations in LRIT3 lead to complete congenital stationary night blindness (cCSNB). Using a cCSNB mouse model lacking Lrit3 (nob6), we recently have shown that LRIT3 has a role in the correct localization of TRPM1 (transient receptor potential melastatin 1) to the dendritic tips of ON-bipolar cells (BCs), contacting both rod and cone photoreceptors. Furthermore, postsynaptic clustering of other mGluR6 cascade components is selectively eliminated at the dendritic tips of cone ON-BCs. The purpose of this study was to further define the role of LRIT3 in structural and functional organization of cone synapses.

Exhaustive electroretinogram analysis was performed in a patient with LRIT3 mutations. Multielectrode array recordings were performed at the level of retinal ganglion cells in nob6 mice. Targeting of GluR1 and GluR5 at the dendritic tips of OFF-BCs in nob6 retinas was assessed by immunostaining and confocal microscopy. The ultrastructure of photoreceptor synapses was evaluated by electron microscopy in nob6 mice.

The patient with LRIT3 mutations had a selective ON-BC dysfunction with relatively preserved OFF-BC responses. In nob6 mice, complete lack of ON-pathway function with robust, yet altered signaling processing in OFF-pathways was detected. Consistent with these observations, molecules essential for the OFF-BC signaling were normally targeted to the synapse. Finally, synaptic contacts made by ON-BC but not OFF-BC neurons with the cone pedicles were disorganized without ultrastructural alterations in cone terminals, horizontal cell processes, or synaptic ribbons.

These results suggest that LRIT3 is likely involved in coordination of the transsynaptic communication between cones and ON-BCs during synapse formation and function.