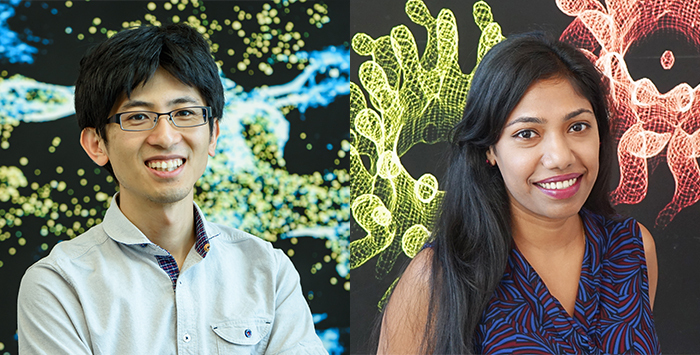 Each year, a committee of neuroscientists from the Society of the Neuroscience convene to evaluate applications for The Peter and Patricia Gruber International Research Award in Neuroscience, an annual award that recognizes early-career neuroscientists who not only demonstrate scientific excellence, but also a commitment to international collaboration. Only two winners are selected from a pool of talented scientists from around the world and this year, both winners come from the Max Planck Florida Institute for Neuroscience.

MPFI Research Group Leaders Hidehiko Inagaki and Vidhya Rangaraju are the 2020 winners of the Peter and Patricia Gruber International Research Award in Neuroscience. Winners of this prestigious prize receive $25,000 and recognition from the president of SfN. This year, awardees were recognized during a special Awards Announcement Week from October 26 – 29. Drs. Inagaki and Rangaraju were recognized October 28 at www.sfn.org/AAW. This is the first time that two researchers from the same institution have been awarded this honor.

“I am truly honored to be recognized by the Gruber Foundation that has supported exceptional neuroscientists over many years. Receiving this award is a strong acknowledgement of not only my past research accomplishments but also the goals I have set for our research group in neuroenergetics,” said Vidhya Rangaraju.

Hidehiko Inagaki also expressed gratitude, saying “As someone who deeply values international collaboration, this is a tremendous honor. I appreciate that the committee shares my excitement about my research and am very proud to receive this award.”

Dr. Vidhya Rangaraju started her Research Group Leader position at the Max Planck Florida Institute for Neuroscience in January 2020. The overarching goal of the Rangaraju group is to investigate the energy use and supply of biological processes in neurons.

Prior to this appointment, Rangaraju was an EMBO and Marie Curie Postdoctoral Fellow in the group of Dr. Erin Schuman at the Max Planck Institute for Brain Research in Germany. During her postdoc, she uncovered the presence of local mitochondrial compartments of energy that fuel local translation during synaptic plasticity.

Rangaraju completed her Ph.D. in the lab of Dr. Timothy Ryan at Weill Cornell Medicine in New York. During her graduate work, she developed a novel optical reporter of synaptic ATP to measure dynamic changes in ATP concentrations and elucidated the link between neuronal activity and ATP synthesis.

She is the recipient of numerous awards including the Vincent du Vigneaud Award of Excellence, Lindau Nobel Laureate Meeting Award, and the MPIBR Scientific Discovery of the Year Award.

Prior to this appointment, Inagaki was a Helen Hay Whitney Foundation Postdoctoral Fellow at the Janelia Research Campus of Howard Hughes Medical Institute, working with Dr. Karel Svoboda. At Janelia, he studied the neuronal mechanism of short-term memory in the frontal cortex.

Inagaki completed his Ph.D. under the mentorship of Dr. David J. Anderson at the California Institute of Technology. For his graduate work, he studied the neuronal mechanism of internal states in Drosophila. For his B.S., he worked in Kei Ito’s lab at the University of Tokyo, where he studied the anatomical and physiological properties of mechanosensory neurons in Drosophila.

He is the recipient of numerous honors including a 2020 Searle Scholars Award, the Harold M. Weintraub Graduate Student Award and Larry Katz Memorial Lecture Award.