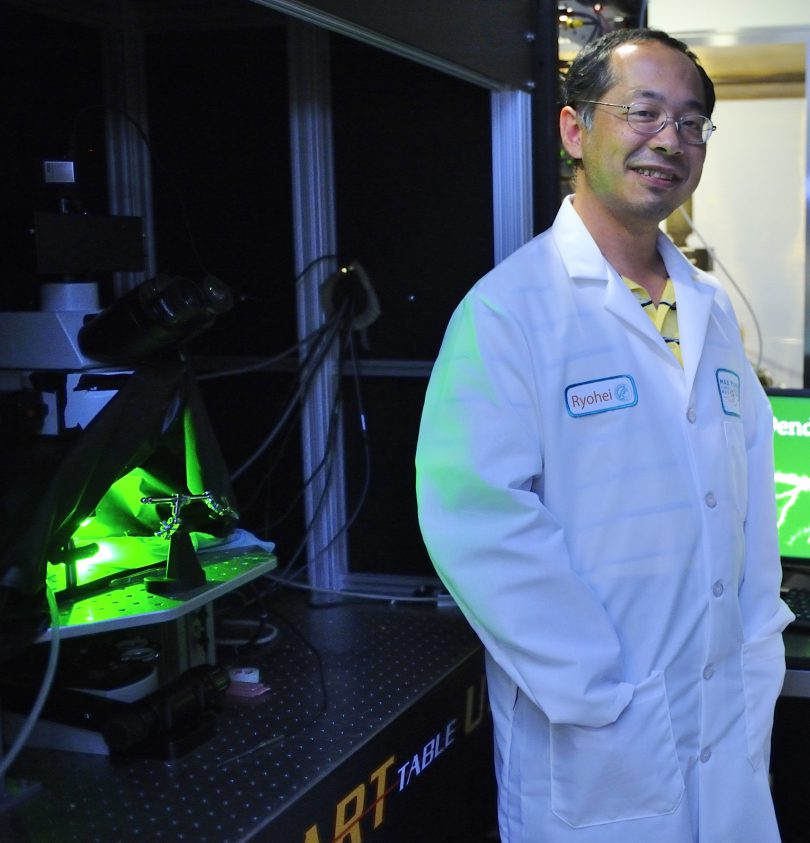 In order to understand memory deficit and neuronal loss in mouse models of Alzheimer’s disease, the Bright Focus Foundation, a non profit dedicated to supporting research on Alzheimer’s disease as well as macular degeneration and glaucoma, awarded a grant to Max Planck Florida Institute for Neuroscience (MPFI) researchers, Ryohei Yasuda, Ph.D., Scientific Director and Erzsebet Szatmari, Ph.D. Previous studies from the Yasuda Lab have shown that when beta-amyloid is increased in an animal’s brain, so is the level of a protein, called centaurin a1 (CentA1). The two scientists sought to understand how CentA1 might be involved in the Alzheimer’s disease process using mouse models of the disease.

Over half a century ago, Dr. Alois Alzheimer cared for a patient who was slowly losing more and more of her memories and herself. Upon her death, he examined her brain, and identified what are now considered the two main biomarkers for Alzheimer’s disease: plaques and tangles. Plaques are clumps of proteins that build up between neurons and interfere with their ability to communicate. Tangles have a similar effect inside the neurons. Decades later, scientists have observed that the severity of the disease directly correlates with the number of plaques in a patient’s brain, and that the plaques consist mainly of a particular protein called beta-amyloid. Over the past twenty years, five drugs have been approved to treat the symptoms of Alzheimer’s disease, but none have been able to prevent the degenerative action of these plaques.

They suspected that the protein may be produced in response to beta-amyloid and play a role in protecting neurons from degeneration. They were surprised to discover that when the protein was removed, neurons in culture actually grew more connections to surrounding neurons. It seemed CentA1 was not protective at all, but actually involved in elimination of dendritic spines, the sites of neuronal connections. To examine whether removing CentA1 from the brain might have an effect on memory formation, the group has developed mice that lack the CentA1 protein (CentA1 KO).

The Bright Focus Foundation’s grant will support undergoing experiments that will address two questions: First, Is learning and memory improved in mice lacking CentA1? Second, if it is, will lack of this protein restore memory loss in Alzheimer’s disease model mice?

In order to test the effect of CentA1 KO on memory of these mice, the scientists will use behavioral tests that evaluate spatial memory and fear memory. The scientists are developing the tests in collaboration with the laboratory of Bob Stackman, Ph.D., Associate Professor at Florida Atlantic University (FAU). Szatmari and Stackman met when Stackman gave a talk about his laboratory’s work in behavioral neuroscience as a part of a TINSS lecture series connecting local scientists from MPFI, Scripps Research Institute, Florida and FAU. Szatmari says she immediately knew that the laboratory’s studies could benefit from the expertise of Stackman’s team. Soon after the seminar, Yasuda and Stackman started a formal collaboration that they hope will extend to other projects in the Yasuda Lab. The group is also collaborating with world-renowned Alzheimer’s disease scientists from Mayo Clinic Florida, who will examine human Alzheimer’s brains for signs of misregulation of CentA1 signaling.

Yasuda’s team points out that the preliminary results are promising and that the mice lacking CentA1 perform significantly better than normal mice on a variety of behavioral tests. “We hope that understanding of the molecule CentA1 will provide new therapeutic targets for treating Alzheimer’s disease in the future.” Yasuda said.