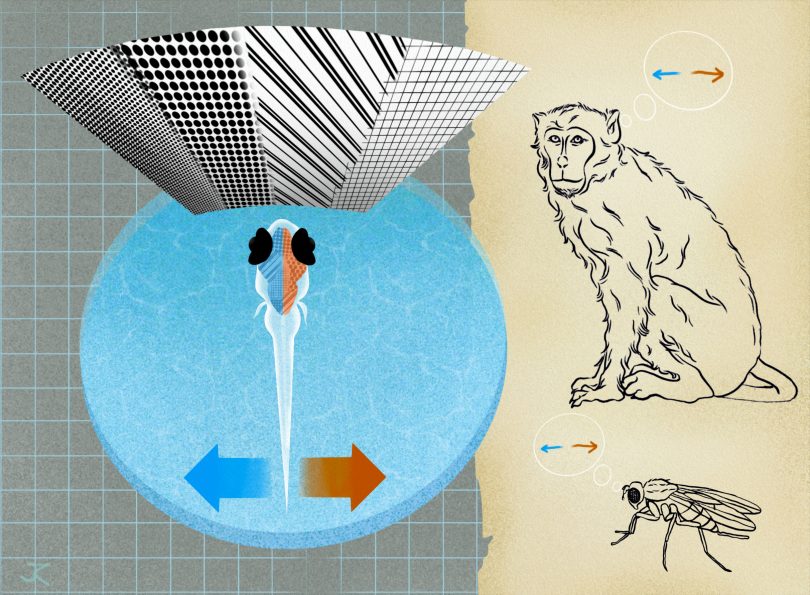 Every moment, our eyes receive innumerous visual stimuli. Yet, only a part of them is passed on to the brain. Researchers from the Max Planck Institute of Neurobiology have now discovered that the brain of zebrafish reacts mainly to stimuli that are important for behavior. Other information is ignored. The results show that the retina of the eye already filters the visual information. The information transmitted to higher brain areas mainly serves to generate a corresponding behavior – saving the brain from processing every single pixel in the visual environment. Interestingly, the algorithms for processing natural images in zebrafish are very similar to those of flies or primates. The very different brains of these animals seem to use similar features of natural stimuli to produce behavior.

A simple look out the window reveals how impressive our brain is. Outside, the wind moves the leaves, a car drives by and a person, half in the shade, waves at us. We quickly recognize the acquaintance and wave back. However, in all this, our eyes have actually only recognized spots that are bright one moment and maybe dark again the next moment.

From the incoming pixel intensities and their changes, the brain needs to calculate objects and movements, classify the information, and trigger a corresponding behavior. How this happens exactly, is still not fully understood. Yet, tiny, transparent zebrafish larvae could now bring light into the flicker of pixels.

“We all have a notion of what motion is,” explains Tugce Yildizoglu, a PhD student in Ruben Portugues’ group. “But it is not that simple: the brain needs to compute it – and zebrafish can help us understand how.”

The neurobiologists want to understand which features of visual scenes a brain uses to identify motion. To this end, they presented busy white and black patterns to the fish in the laboratory. In the real world, there is no symmetry between light and dark. This fact allowed the researchers to fool and thus test the visual processing of motion.

“We can vary individual components of these complex patterns and thus investigate when the fish detect movement,” explains Yildizoglu. The animals show that they can see a motion with a movement of their own. The fish perceived some of the stimuli as moving to the left. When the scientists switched everything dark to light, and light to dark, the fish suddenly perceived the stimuli as moving to the right.

Motion processing in the fish brain

In the transparent fish brain, the researchers are able to observe which brain areas react when they presented a pattern to the fish or when the animal wants to turn. The investigations show that the retinal neurons calculate the correlations and statistics of the image shown. The cells extract motion pattern cues, which they transmit to higher brain regions. The pretectum, a central brain region, then processes only the image information that is important for a behavioral response.

“It looks as if the ganglion cells of the retina are optimally adapted to process the information from a natural environmental image,” explains Ruben Portugues. “The important aspect is that they have evolved to use the statistics of the real visual world to perfect how they identify motion.”

“An exciting aspect of our study is that the brains of very different animal species have apparently learned diverse ways of using the same statistics to compute the same thing, in our case, motion,” says Tugce Yildizoglu. “Not only zebrafish, but also fruit flies and primates react in a similar way to the complex motion patterns, called gliders, we used in the lab.”

These and other results show that the principles and algorithms for visual motion processing are often remarkably similar across different species. With the transparent zebrafish larvae, the neurobiologists now hope to have found an approach that will enable them to better see and understand the basics of motion vision in vertebrate species.