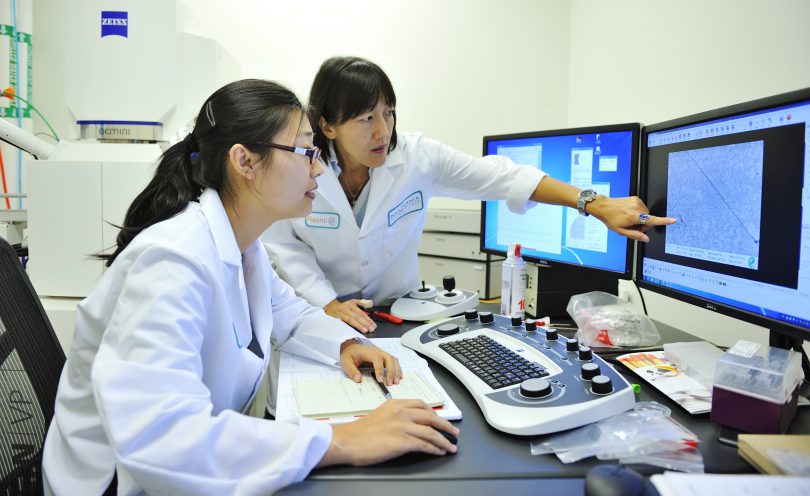 “There was a very popular saying in China when I was in high school: The 21st century is the century of biology,” said Ye Sun, a graduate student in the Max Planck Florida Institute for Neuroscience (MPFI) and Florida Atlantic University (FAU) Integrative Biology and Neuroscience (IBAN) program. She quickly fell in love with the mysteries of biology. Every question was new and exciting, and she loved having the freedom to design experiments to answer them. When she went to college, she followed her passion for the unknown into a neuroscience laboratory, where she learned that the brain is still largely a mystery. Her drive led her to graduate research at MPFI, where she is currently combining two cutting-edge imaging techniques in the hopes of answering her questions about the brain.

Ye, who co-workers affectionately call “Sunny,” is curious about how connections are organized in the brain, especially the connections that regulate the formation of new memories. Neurons that control learning and memory communicate through sites called dendritic spines – small protrusions that are approximately 0.5 µm long. Each neuron has a few thousand spines, and throughout our life, there is a delicate balance between the number of spines that disappear and the number that are formed. Under the supervision of MPFI Scientific Director, Dr. Ryohei Yasuda, Sunny set out to visualize the nanostructure of newly formed spines, which they believe will uncover critical details about the formation of new memories.

Her Ph.D. project is very ambitious: integrating 2-photon microscopy and electron microscopy. By using 2-photon microscopy, she can induce the formation of new spines in living neurons. To study the structure of the newly formed spines and molecules involved in this process under the electron microscope, she has to track the exact position of these spines. This is the greatest challenge of her project due to the small size of each spine, the large number of spines per neuron, and the enormous number of neurons in the brain tissue samples.

In a scientific project, there are many problems and difficulties that you need to solve. This is the part that I like most. You just need to be strong, persistent, and patient,” said Sunny.

Fortunately, MPFI’s Electron Microscopy Core acquired the Automatic Tape-Collecting Ultramicrotome (ATUMtome*) in 2015. Continuous access to this newly developed tool has been very helpful to Sunny’s project, as it can be used to track neurons throughout brain tissue. It also makes the image processing for electron microscopy, which is exceptionally difficult and laborious, more approachable for scientists. With help from Dr. Naomi Kamasawa, Head of the Electron Microscopy Core Facility, and Debbie Guerrero-Given, Research Scientist, Sunny is refining the ATUMtome’s use to target synaptic structure (using the scanning electron microscope) and function (using 2-photon microscope or electrophysiology), which could be applied to several future research projects.

*ATUMtome’s tape collecting part of the system (ATUM) is under license from Harvard University.