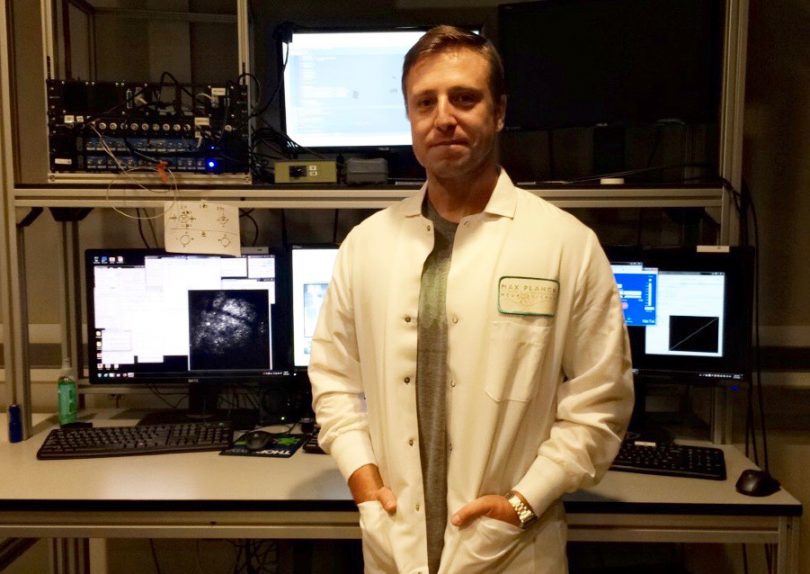 Joseph Schumacher, Ph.D., a Postdoctoral Researcher in the Fitzpatrick Lab at Max Planck Florida Institute for Neuroscience (MPFI), has been investigating how learning impacts the coding structure of visual cortical circuits.

“Ever since I was in grad school, I’ve been very interested in what we can learn from animal behavior,” he noted. Schumacher earned his Ph.D. in Neurobiology and Behavior at Columbia University, where he examined the role of developmental vocal learning on shaping the response properties of auditory cortical neurons in songbirds.  Since joining the lab of Scientific Director and CEO David Fitzpatrick, Ph.D. in 2014, Schumacher has been studying an animal that is more similar to humans: the tree shrew.  “Phylogenetically, the tree shrew is somewhere in between a rodent and a primate,” he explained. “The things that we can learn from studying such an animal are more likely to be impactful on public health.”

Schumacher is interested in understanding the functional development of visual cortical circuitry in the tree shrew under more natural conditions. Faced with survival out in the wild, animals must utilize some form of decision making in order to hunt for food, find shelter, and escape from predators. Schumacher has been designing perceptual tasks that will evoke visual behaviors more similar to those observed in the wild. The benefit of employing a perceptual task as opposed to a motor task is that the animal does not have to move to perform the task. Schumacher clarified, “Movement is a problem for imaging.  When the animal moves, the brain moves.”

The task is simple: the animals view an object, such as a bar, on a tablet screen and must make a perceptual judgment about the orientation of the object.  Preliminary data has shown that tree shrews can discriminate between a target orientation and distractor orientations fairly easily.  Schumacher can vary the difficulty of the task by making the distractor orientation more and more similar to the target orientation, until the two are so similar that the animal can no longer tell the difference between them. As the animal learns to do finer and finer discriminations, Schumacher questions what is happening to the visual cortex.  Is this information being coded more specifically? Is the representation of the orientations on the screen coinciding with the animal’s behavior?  What is the impact of learning on sensory processing?

“These are sort of classical problems in neuroscience,” he remarked. “One of the things we can do now is image large populations of neurons over time, and see how those neurons change over time.” Schumacher said there are early indications that, depending on the animal’s performance on a given task, the response to stimuli can vary.  When asked about issues that have arisen with this project, Schumacher replied, “These types of experiments are very costly, both in terms of time invested and resources required. It would be very difficult to do these experiments anywhere other than Max Planck.”

People have wanted to track the impact of learning over time in large populations of neurons, and only recently have we had the technology to do so.”

Schumacher is excited about future directions of the project. “Going forward, there are a lot of questions we can ask,” he stated. There are a number of disorders of the visual system that have unknown mechanisms, but understanding how a normal, healthy visual system works will help to better understand these disorders.  Besides vision, Schumacher would like to find out what else the tree shrew is especially good at and why. “You want to study a circuit for what the circuit is supposed to do,” he argued. Tree shrews have interesting vocalization repertoires and very human-like ears, so analyzing one of these features could be the next step in Schumacher’s research.

Schumacher is also the co-creator and co-host of a neuroscience podcast, Neurotransmissions. The podcast offers a look into the world of neuroscience research through discussions of current research topics and public health issues with world-renowned neuroscientists, including 2014 Nobel Laureate in Chemistry Eric Betzig, Ph.D., Harvard professor and connectomics pioneer Jeff Lichtman, Ph.D., and HHMI group leader Na Ji, Ph.D. Visit here to listen to available episodes and sign up for updates from the Neurotransmissions team.