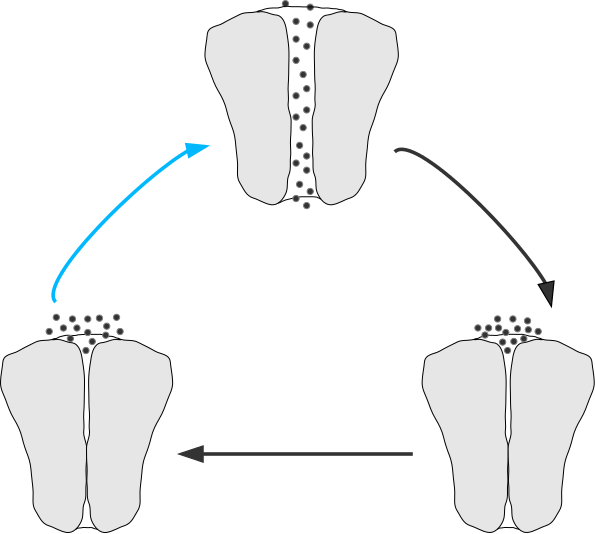 Model of light-sensitive channels and the dynamics of the three-state model for Channelrhodopsin-2. The light blue arrow indicates a light-dependent transition.

Scientists develop a computational model to predict and interpret the outcome of optogenetic experiments.

Optogenetic manipulation of neural network activity has become a widely used method to modulate neuronal activity in vivo, for instance, to activate and silence neurons in the brain. However, the field yet lacks quantitative tools to predict how local and how temporally precise the network response to the light stimulus can be. To clarify how optogenetic activation of certain neurons alters the dynamics of a whole network, scientists from the Max Planck Institute for Brain Research in Frankfurt am Main and the University of Göttingen studied the spatial and temporal response of individual neurons and recurrent neural networks with a computer model. Their work was published online in the journal Network Neuroscience.

One of the most commonly employed optogenetic tools is Channelrhodopsin-2 (ChR2), a molecule complex sensitive to blue light that naturally occurs in a species of unicellular algae. This complex can be genetically inserted into neurons, enabling the activation of the host neurons upon stimulation with blue light. The scientists constructed a computational model of a biologically realistic network of neurons and included in each neuron a population of ChR2. The published program code can be used to implement dynamics of alternative molecule models.

“The goal of the study was to provide a model and analysis tools as well as reporting quantitative predictions that can help in the design and interpretation of optogenetic experiments”, says Tatjana Tchumatchenko, research group leader at the Max-Planck-Institute for Brain Research, who led this project. “Analysing the stimulus-response relationship of neurons is essential to model network dynamics following optogenetic stimulation and to alter neuronal activity in brain tissue,” explains Jannik Luboeinski (University of Göttingen), a former Master student in the Tchumatchenko group.

The study presents new insights into the temporal and spatial impact of ChR2 activation. It reveals a complex relationship between the stimulation frequency of light pulses and the resulting time course of the activity of neurons. Another important finding relates to the spatial distribution of activity in a network.

“Our main discovery is that a narrow stimulation profile evokes a broad response profile in neural networks. We hope this finding will be useful for the design and interpretation of future optogenetic experiments to further uncover cellular mechanisms, behaviours and pathologies”, Tchumatchenko concludes.

The study was funded by the Max Planck Society and the German Research Foundation (DFG).