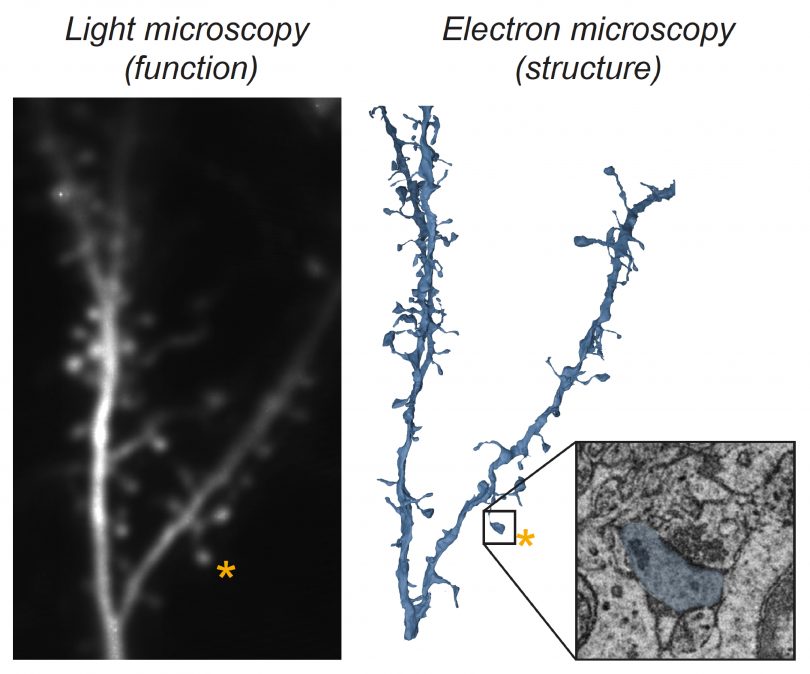 An interdisciplinary team of scientists at the Max Planck Florida Institute for Neuroscience have developed a novel approach to measure the activity and strength of individual synapses that drive a neuron’s response to sensory input.

A common analogy used to describe the brain is that it consists of tiny interconnected computers. Each one of these computers, or neurons, process and relay activity from thousands of other neurons, forming complex networks that allow us to perceive our surroundings, make decisions, and guide our actions. Communication between neurons occurs through tiny connections called synapses, and each neuron integrates the activity across these synapses to form a single output signal. However, not all synapses are created equal. Synapses converging onto an individual neuron differ in size, and size is correlated with strength: larger synapses are stronger and have a greater influence on a neuron’s output than smaller synapses. But why are some synapses stronger than others, and how does this impact individual neurons processing incoming signals?

One well-known theory has suggested an answer. The Hebbian model for circuit development posits that the strength of a synapse between two neurons is determined by similarity in their activity. Synapses between neurons that are highly co-active become stronger than those that are less frequently co-active. This relationship provides a clear prediction for the diversity of synapse sizes present in mature neurons.  Large synapses would be formed with other neurons that have very similar response properties, and these synapses have a dominant role in determining the output of the neuron.  In contrast, small synapses would arise from neurons with less similar response properties and have less impact on the neuron’s response. Although there is some evidence in support of this model, a direct test requires measuring the activity of individual synapses, their size, and their neuron’s output signal, a combination that has been challenging to achieve with existing technologies.

Now, for the first time, an interdisciplinary team of scientists at the Max Planck Florida Institute for Neuroscience (MPFI) report the results of a novel approach that allowed them to achieve these measurements. Published in the journal Nature, their work challenges predictions of the Hebbian model, demonstrating that synapse size is not correlated with response similarity and suggests neural response properties reflect the total number of active synapses, both weak and strong.

Benjamin Scholl, Ph.D., a postdoctoral researcher in the Fitzpatrick lab at MPFI, was inspired to explore this question in the visual cortex, where he could take advantage of the fact that individual neurons exhibit a high degree of selectivity in their response to different features in the visual scene, such as the orientation of edges or the direction of a moving object. This phenomenon, termed feature selectivity, arises through the integration of thousands of synapses conveying different signals, but exactly how this occurs is unknown. “We aimed to test the hypothesis that the strong synapses have responses that closely match the neuron’s feature selectivity, while the weak ones do not,” explained Scholl, who is co-first author of the study. To test this hypothesis, the scientists utilized a light microscopy technique to visualize the activity of a population of synapses on individual neurons in real time. But this technique alone has a severe limitation—only synaptic activity can be observed, not their strength.

To measure synapse strength, a collaboration was formed with another team of scientists from the Electron Microscopy Core Facility at MPFI, led by Naomi Kamasawa, Ph.D. “Electron microscopy captures incredibly detailed images of a synapse, at the nanometer scale, allowing us to make precise measurements of their structure”, explained Connon Thomas, co-first author of the work and an electron microscopy specialist. “These structural measurements tell us how strong each synapse is. By first examining synapse activity with light microscopy, then measuring the strength of those same exact synapses with electron microscopy, we knew we could answer this question”. The combination of these techniques, termed Correlated Light and Electron Microscopy (CLEM), allowed the researchers to measure the function (feature selectivity) and structure (strength) of populations of synapses from several neurons.

In their initial results, the team found nothing unexpected: some synapses shared feature selectivity with the neuron, while others were different; some synapses were small (weak), while others were large (strong). But when these data were put together, the authors were surprised to find that both strong and weak synapses exhibited a wide variety of functional properties: there was no strict relationship as theorized. However, by examining the activity of the whole synaptic population, the researchers recognized that they had uncovered the likely synaptic basis for feature selectivity. “We observed a ‘strength-in-numbers’ phenomenon. Our data suggest that the feature selectivity of a neuron is derived from the total number of synapses activated, including strong and weak,” described Scholl. “In fact, we found many more weak synapses driving feature selectivity, which suggests they could have a predominant influence”. In support of this, the team observed that neighboring weaker synapses were more often co-active, which could even enhance their influence on the neuron.

These results challenge the prevailing theory that strong synapses are exclusively found between neurons with similar response properties and play the dominant role in determining a neuron’s feature selectivity. Instead, selectivity appears to derive from the total numbers of synapses, suggesting that a synaptic democracy (akin to the popular vote) is most important. This still leaves open the question of why some synapses are stronger than others and studies are underway using these technologies to explore what other aspects of synaptic connections might be important. “Combining both structural and functional measurements of neurons provides a more holistic understanding of how our brains compute information” says Thomas. “The CLEM technique is allowing us to push the boundaries of what we know about fundamental workings of the brain.” This work emphasizes the creative synergy that results from bringing together curiosity-driven scientists from different disciplines, enabling new insights into neural circuit organization that could not have been anticipated, and laying the foundation for tomorrow’s advances in understanding disorders of brain function.

This work was supported by the National Eye Institute of NIH, Max Planck Florida Institute for Neuroscience, and Max Planck Society. The content of this article is solely the responsibility of the authors and does not necessarily represent the official views of the funding agencies.

In addition, the novel technique developed by the team is the focus of a Microscopy and Microanalysis article. More information here.