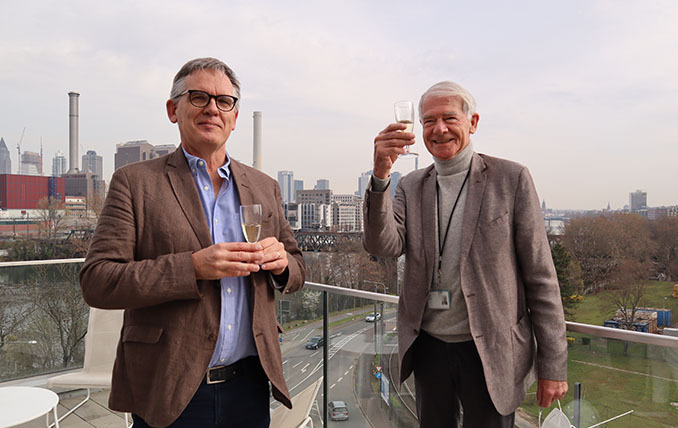 David Poeppel takes over managment of the Ernst Strüngmann Institute.

The Ernst Strüngmann Institute (ESI) welcomes David Poeppel as its new director. On April 1 he succeeds Wolf Singer to stand alongside Pascal Fries at the Frankfurt research institution’s top. With David Poeppel ESI has gained a renowned scientist whose experience and expertise perfectly complement and expand the research focus on neuroscience.

“This new addition is a huge enrichment,” Wolf Singer welcomes his successor in office and adds: “The scientists at ESI are concerned with elucidating the neuronal basis of cognitive functions. David Poeppel now expands the spectrum of brain performances studied to include the highest cognitive and specifically human performance: linguistic communication. This research approach allows us to use findings from neurobiological studies to explore normal but also impaired functions of the human brain.”

Pascal Fries can only agree: “I am happy to welcome David as director colleague at ESI. David has done extremely interesting work in language, particularly the role of brain rhythms in language production and understanding. This brings an additional exciting research theme to ESI.”

From the human to the cell

David Poeppel studied neuroscience, cognitive science, and linguistics. He received his PhD in these fields from the Massachusetts Institute of Technology (MIT) in the United States. Before joining ESI, he was director of the department of neuroscience at the Max Planck Institute for Empirical Aesthetics in Frankfurt. Besides, he is and remains a professor of psychology and neuroscience at New York University (NYU).
“My specialty is the human brain. How do we hear and why can we talk? That is not so easy when you think about all the things that have to happen for it to work at all. I want to know: How is the human brain organized to make this typically human behavior possible?”, David Poeppel explains his research focus. So far, he has worked with humans for this purpose. ESI offers him the opportunity and infrastructure to pursue this question systemically as well and to find out at the cellular level which neuronal dynamics make speech and understanding possible.

The new managing director will increase the focus of experimental research on humans. The general conditions for this are excellent, as ESI is located in the vicinity of facilities of the Goethe University Hospital, the clinics for neurology, psychiatry, and adolescent psychiatry. Besides, the new Brain Imaging Center, which will be operated jointly with the clinic, is currently being built right next to ESI. This offers all the state-of-the-art equipment for the non-invasive measurement of brain activity in humans.

“Typical of my type of research is the tension between quite natural and ecologically valid behavior, such as having a conversation or listening to a symphony, and the very simple but more easily measured experiments that we neuroscientists do,” David Poeppel says. “In doing so, it is a big challenge to find the approach that will best illuminate the fascinating topics that really interest us. An institute like ESI can contribute immensely to that by looking more closely at humans in addition to non-human primates and rodents.”
For this reason one of David’s goals is to embed the institute more firmly in the neurological research landscape of Frankfurt: “With the clinics in the immediate vicinity, but also the other institutes in the city area, there are incredible resources available that can be used to create synergies. And of course, this offers ESI the chance to work out its unique selling point: that it builds a bridge from systemic to human neuroscience. Indeed, the intellectual end game is to figure out how we humans function.”

ESI is an independent research institute financed by the Ernst Strüngmann Foundation which was created by Drs. Andreas and Thomas Strüngmann and named after their father Dr. Ernst Strüngmann. The institute is under the Max Planck Society’s scientific governance with the mission to perform excellent fundamental brain research. ESI research focuses on understanding how the many parts of the brain work together to bring about our behavior.