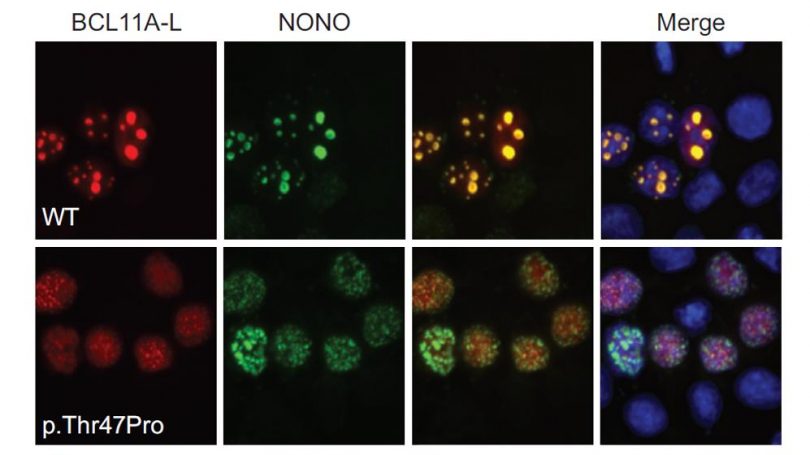 Microscope images showing that a mutation changes the distribution of BCL11A protein in a cell. This also prevents it from co-localising with NONO, another protein implicated in intellectual development. Credit: AJHG.

Scientists at the Wellcome Trust Sanger Institute and Max Planck Institute for Psycholinguistics have found a gene responsible for an intellectual disability disorder including developmental speech and language problems. The research, published in the American Journal of Human Genetics, details the role of a gene called BCL11A in a new intellectual disability syndrome.

The study showed that if one of a person’s two copies of the BCL11A gene is abnormal, or mutated, then they will have the newly described intellectual disability including a delay in speech and language development. The team used human cells and a mouse model to show that the body needs two healthy copies of BCL11A to make enough of the BCL11A protein for brain cells to develop normally and work at capacity.

A team led by Dr. Darren Logan and Prof Simon Fisher worked with nine patients, from the UK and abroad, who have an intellectual disability with global delay in developmental milestones including speech and language delay. They found these people share the same genetic profile and symptoms that they now define as a new clinical syndrome. Each person also had the same unusual blood profile which could be used to help diagnose patients in the future.

Nearly three in every 100 people in the human population have some form of learning disability and it can have many different genetic causes. The way conditions present in patients varies too, and so each syndrome is poorly understood. The research also revealed that mutated BCL11A influences many other genes important for brain development and function.

Prof. Simon Fisher, director of the Max Planck Institute for Psycholinguistics, said: “Studies like ours are beginning to reveal intriguing connections between the biological causes of intellectual disability and disorders of spoken language. And although BCL11A mutations are themselves rare, the gene belongs to a bigger network of genes that are crucial for building a healthy brain, and so it can provide much broader insights into the basis of human cognition, and how this might go wrong during development.”

Dr. Darren Logan, lead researcher from the Wellcome Trust Sanger Institute, said: “We worked with patients, studied human cells and made a mouse model to translate research from the gene discovery phase into understanding a cause of intellectual disability. We’ve shown that the BCL11A gene does cause an intellectual disability syndrome.”

This news release is based on this press release by the Wellcome Trust Sanger Institute.