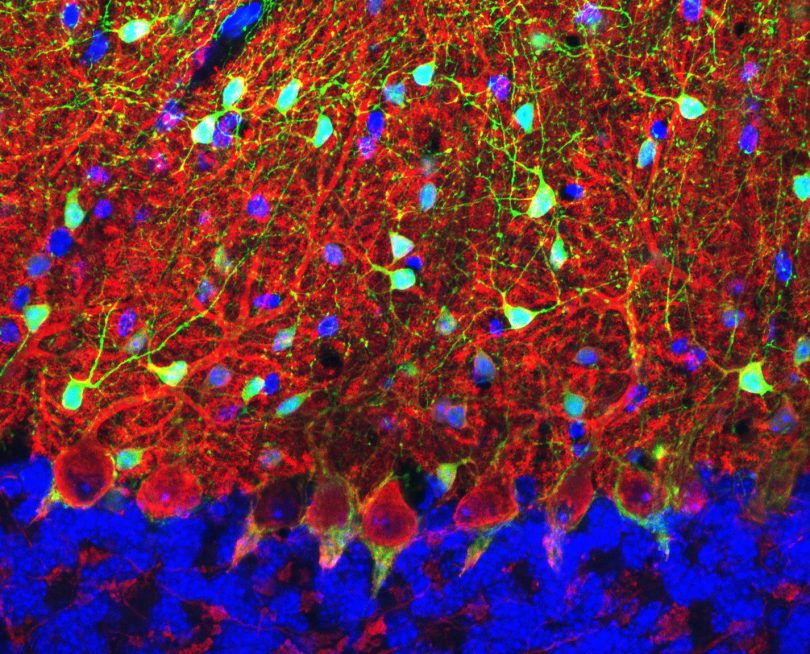 In a study published in the Journal of Neuroscience in May 2017, Michael Gaffield, Ph.D., a post-doctoral researcher in the lab of Jason Christie, Ph.D., sought to clarify how molecular layer interneurons (MLIs) encode behaviorally-relevant information pertaining to rhythmic motor control. The researchers showed that MLIs play a commanding role in both information integration and the online control of cerebellar output to affect behavior.

The cerebellum plays a central role in ensuring that all types of movement are well timed and highly coordinated. MLIs are an important circuit element in the cerebellum, as they provide powerful inhibition onto Purkinje cells, which constitute the sole output of the cerebellum. This inhibition is thought to influence cerebellar function by sharpening the precision of Purkinje cell spiking, allowing for accurate motor control. Despite this knowledge, the sensorimotor coding properties of MLIs and their net influence on motor behavior remained poorly understood.

In their paper, Gaffield and Christie analyzed the coding properties of MLIs during the performance of a rhythmic motor task and measured the corresponding calcium activity. Using two-photon imaging, they visualized widespread and lobule-specific MLI activity within a region of the lateral hemisphere, Crus II, that maps the oral-facial extent. Individual cells in this region were robustly activated at the onset of the motor task, and the average activity profile was sustained during ongoing movement. This confirmed that MLIs are integral components of cerebellar circuits encoding movement.

The team also found that MLI activation preceded the initiation of movement and was closely correlated with the rate of movement during a motor task. These findings suggested that MLIs encode movement rate in their calcium activity. Within the Crus II region, MLIs displayed uniform activity and broad population tuning, which provides neural networks greater flexibility to rapidly adapt to dynamic changes. Further, chemogenetic suppression of MLIs affected both movement rate and experience-dependent refinement of motor behavior, indicating that MLIs not only encode kinematic information relating to movement, but also contribute to the optimization of motor output gained through experience.


By providing inhibitory drive onto Purkinje cells, MLIs are poised to play an important role in information processing during movement. The activity of MLIs modifies motor control, affecting the rate and consistency of continuous movement. MLIs have also been implicated as potential sites of plasticity for the consolidation of learning, and thus understanding their role in motor behaviors may lead to a greater understanding of movement disorders such as cerebellar ataxia, which results in impaired coordination and may cause a variety of issues including difficulty swallowing, dizziness, and inability to perform daily tasks.