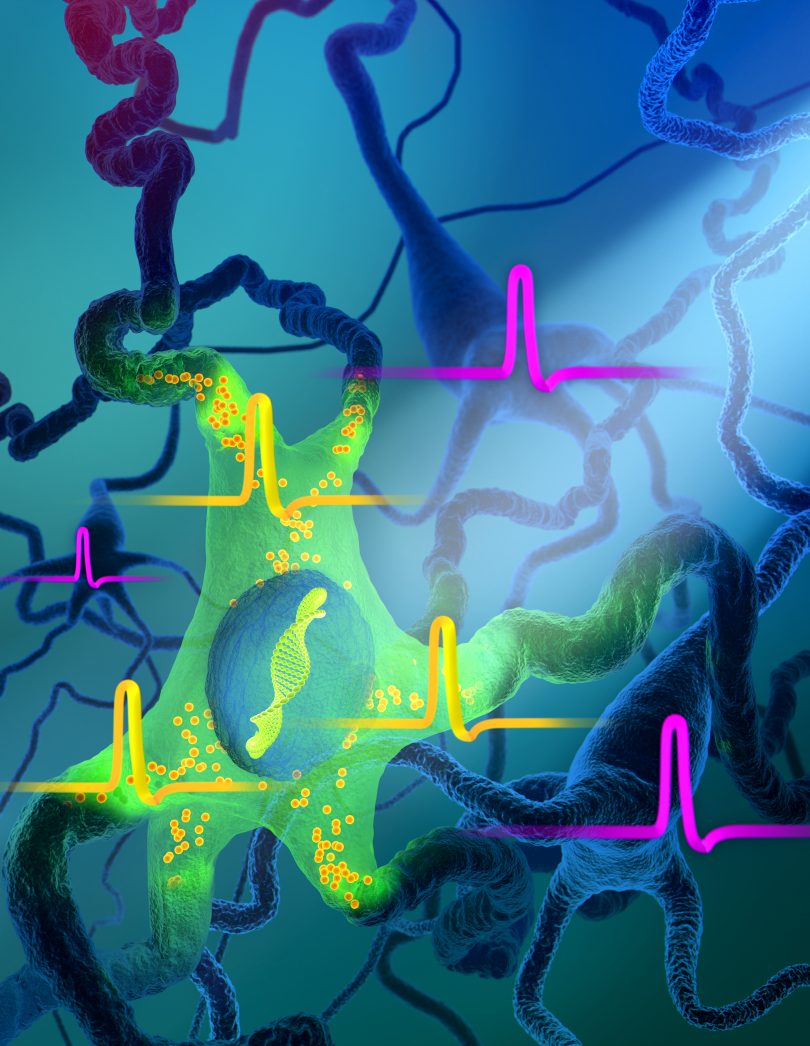 Since scientists began studying the brain, they have asked whether the biology they observed can really be tied to external behaviors. Researchers are building a substantial understanding of the biophysical, molecular, and cellular interactions of neurons, but directly relating those interactions to outward behaviors is an ongoing challenge in the field. “The biophysical properties of neurons are pretty well known,” said Hyungbae Kwon, Ph.D., Research Group Leader at the Max Planck Florida Institute for Neuroscience (MPFI). “What we don’t know well is how these connections and communications trigger our behavior.”

This is the ambitious question Dr. Kwon and his lab are setting out to answer by looking at the brain in a whole new way. In a study published in the journal Nature Biotechnology in June 2017, Dongmin Lee, Ph.D. and Jung Ho Hyun, Ph.D., post-doctoral researchers in the Kwon Lab, describe a new tool they’ve developed to identify and control neurons. The new technique, called Calcium and Light-Induced Gene Handling Toolkit or “Cal-Light,” allows researchers to observe and manipulate the neural activities underlying behavior with never-before-seen specificity, hopefully allowing researchers to identify causality between neuronal activity and behavior. 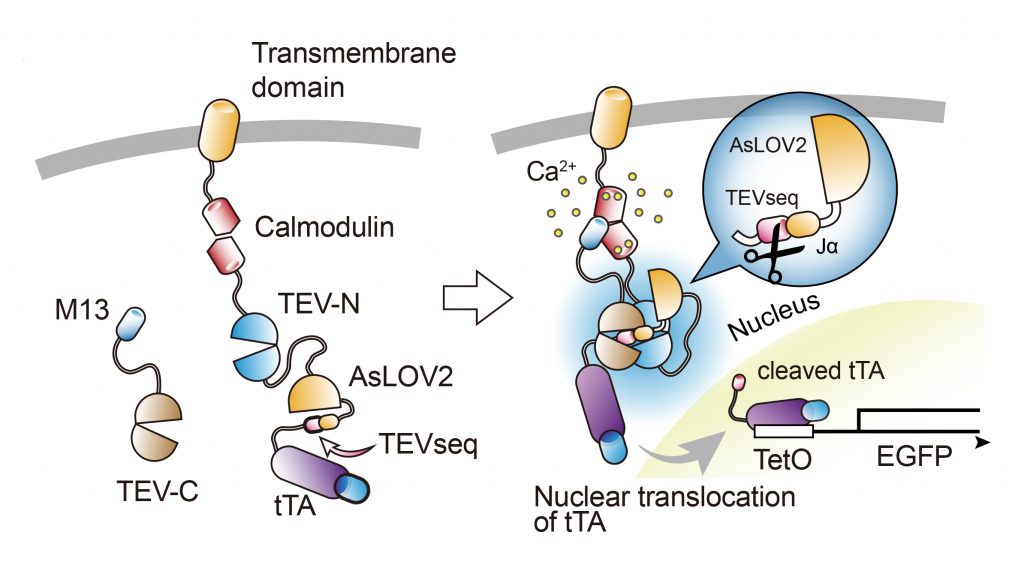 Development of Cal-Light system
Schematic drawing of Cal-Light system. M13 and calmodulin proteins are fused to c-terminus and n-terminus of TEV protease (TEV-C and TEV-N), respectively. When Ca2+ arises in the cytosol, M13 and calmodulin bind to each other and subsequently TEV-C and TEV-N regain proteolytic functions. However, TEV protease cannot recognize TEVseq easily in a dark condition, because TEVseq is inserted at the c-terminus of AsLOV2 J-helix. Blue light causes a conformational change of J-helix making TEVseq unmasked. Cleaved tTA translocates to the nucleus and initiates gene expression.

Up until now, researchers who wanted to observe neuronal activity in real-time often used a technique called calcium imaging. The technique takes advantage of the fact that actively firing neurons receive an influx of calcium. Tagging the calcium ions with fluorescent dye makes it easier to watch them fire in real time, but it doesn’t tie them to specific neuronal populations.

Building on traditional calcium imaging and recent optogenetic techniques for manipulating neuronal activity, the Cal-Light system links fluorescent gene expression with both activity and light. The neurons will only fluoresce if they are firing and a researcher shines a special light on them. If the researcher switches off the light, the neurons will stop fluorescing, greatly increasing the signal-to-noise ratio and temporally specificity. Once researchers identify a population of cells implicated in a particular activity using Cal-Light, they can use optogenetics to manipulate those cells. This allows them to dissect behaviors in an incredibly precise manner and possibly even help develop evidence of causal relationships.

To show that the Cal-Light technique is effective, Dr. Kwon’s group tested it first in cell culture, and then in vivo in a mouse model. In the model, the team used the technique to identify, label, and manipulate a population of neurons in the motor cortex that fired when a mouse pushed a lever to receive a reward in response to a stimulus. Once the neurons of interest were identified and labeled, his team presented the stimulus to the mouse while optogenetically inhibiting the group of neurons. When cells were inhibited, the mouse no longer pressed the lever, demonstrating that the activity of these cells was necessary for the mouse to carry out the behavior. 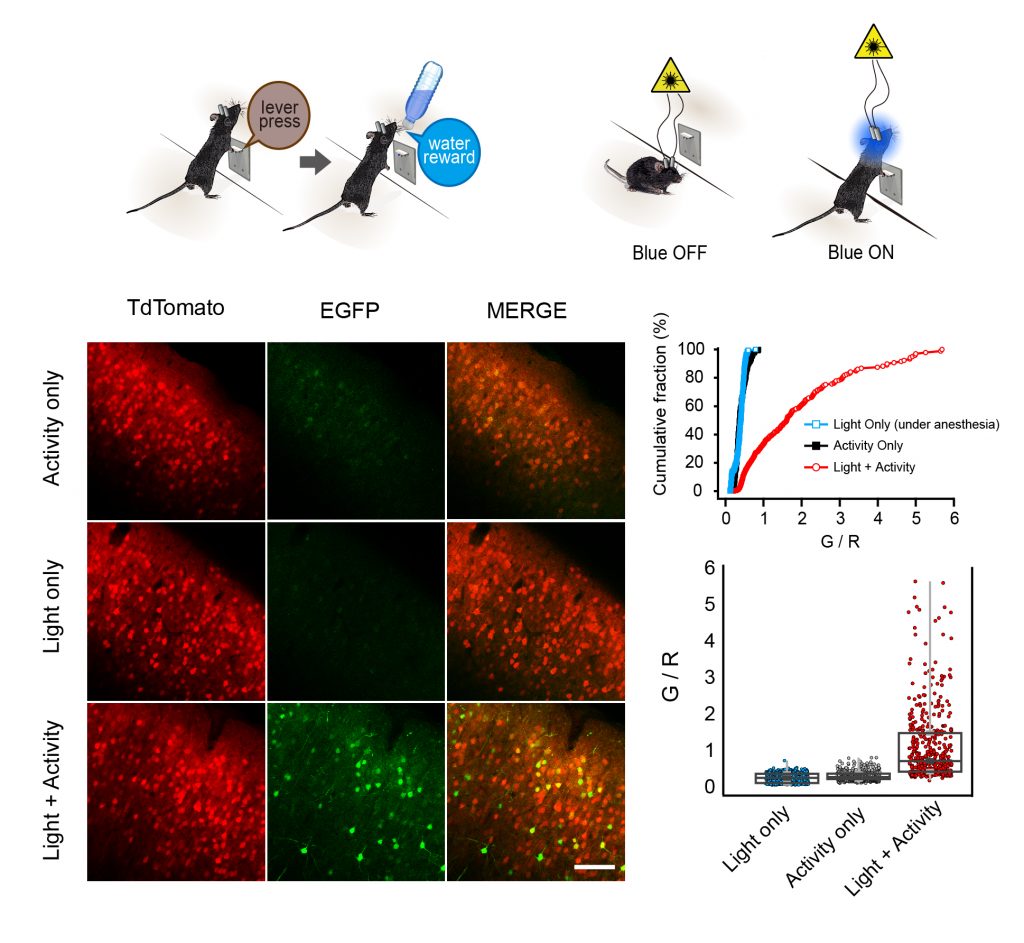 Labeling active population of neurons during complex behavior
(TOP) To label learning-related neuronal population, we trained water restricted mice to learn repetitive lever pressing behavior to get water rewards. Fiber optics were implanted both hemispheres of M1 area and blue laser was programmed to be switched on for 5 sec whenever mice press the lever. Once light was on for 5 seconds, the next blue light was prohibited for the following 25 sec even though mice press the lever. (BOTTOM) Representative images from mouse brains trained with or without blue light; cumulative distribution of G/R at each condition.

This newly developed technique provides an unprecedented opportunity by labeling neurons that control specific actions and providing means of controlling them. According to Dr. Kwon, “The Cal-Light technique offers an opportunity to dissect the neural circuits underlying complex behaviors, sensation, and cognition and introduces a new way of approaching complex questions in neuroscience.”

This work was supported by Max Planck Florida Institute for Neuroscience, Korea University, and Max Planck Society. The content of this article is solely the responsibility of the authors and does not necessarily represent the official views of the funding agencies.