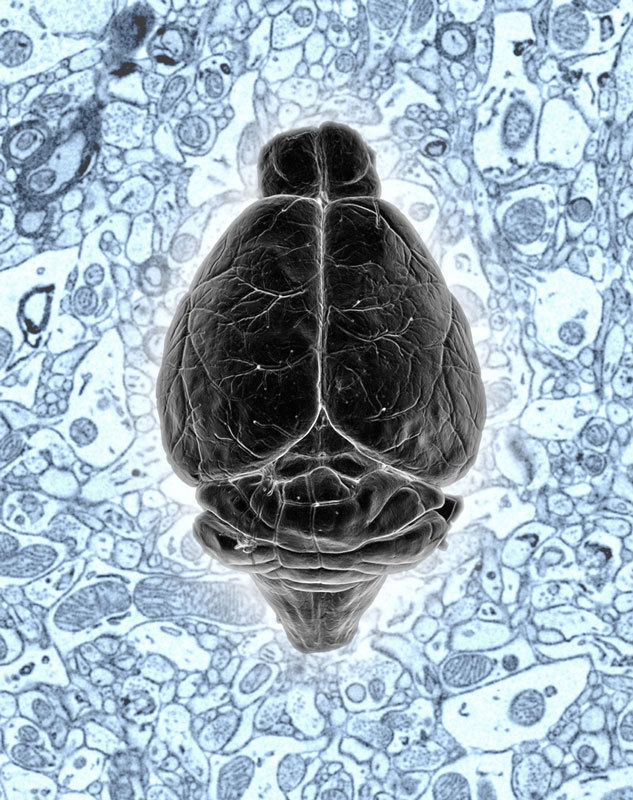 A new staining method closes one of the last methodological gaps: Now it's possible to map every nerve cell and its synapses in a mouse brain. © MPI of Neurobiology/ S. Mikula

Learning, it is widely believed, is based on changes in the connections between nerve cells. Knowing which nerve cells are connected to which other nerve cells would considerably help us to understand how the brain works. Scientists have therefore long dreamed of mapping and then decoding the connectome, the circuit diagram of the brain. With the development of a special staining method, Shawn Mikula and Winfried Denk and of the Max Planck Institute of Neurobiology in Martinsried have now closed one of the last methodological gaps: how to stain an entire brain. The mapping of a whole mouse brain now seems within reach, but even if the equipment works as designed, the collection of the data alone will take several years and the analysis of the approx. 40 petabytes of data may take decades.

A lot has happened since scientists in the late 19th century first started examining nerve cells under the microscope. Anatomy, chemistry, physiology and cell biology in healthy as well as in sick brains has since been extensively explored. How thoughts and feelings arise from the activity of individual cells and what happens when cells disconnect from the network through degenerative diseases, for example, is still unclear. It is, therefore, clearly important to know the network’s connections. Finding all of those connections is the aim of connectomics.

The human brain contains around 100 billion neurons and close to a quadrillion (1015) cell-to-cell connections. While mapping a human brain’s connectome is currently science fiction, the development of the serial block-face scanning electron microscope and other imaging and analysis methods has brought the connectome of the mouse brain, which is 3000 times smaller than the human one, within reach. “A crucial step, which was still missing, was the preparation of a whole-brain sample”, says Shawn Mikula. For the last six years he has been working on staining of a complete mouse brain so that the contrast is uniform across the brain and the ultrastructural information needed for tracing the brain’s wires and detecting its synapse doesn’t get destroyed. Previous staining methods could only reliably stain relatively small tissue samples. But once the brain is divided into small pieces, neural wires can no longer be pursued between the pieces, preventing the subsequent generation of a brain-wide map. Methods that aim to stain the whole-brain either stained the brain too weakly or unevenly, or they destroyed brain ultrastructure. As a result, the reconstruction of all nerve cell connections remained impossible.

Shawn Mikula and Winfried Denk have now presented their BROPA method for the staining of a whole brain. The abbreviation, BROPA, stands for a complex sequence of staining and rinsing steps, including osmium and pyrogallol solutions. The whole staining process takes around four weeks. “My patience was sorely tested because it is not until the end of this period that one knows whether a change in the staining process was good or bad”, explains Shawn Mikula. But after a lot of waiting and refining, the two scientists are now satisfied with their new method: “Our results show that single axons can be followed reliably and synapses recognized with the serial block-face scanning electron microscope in a BROPA-stained mouse brain”, says Mikula. An important success for the team, as Winfried Denk invented the serial block-face scanning electron microscope more than 10 years ago with this goal in mind.

“We are now an important step closer to our goal of recording a complete mouse brain with all its cells and connections under the electron microscope”, explains Winfried Denk, Director at the Max Planck Institute of Neurobiology. As soon as the latest generation of instruments is delivered and tested, which is planned to take over a year, the scientists intend to start the project. “I estimate that just collecting the data will take around two-and-a-half years”, says Denk. In this time, around 40 petabytes of data will be generated. “We will manage the storage somehow, it’s the analysis we’re still worried about”, adds Mikula. The results so far show that automated computer programs can recognize BROPA-stained synapses and cell bodies quite reliably. But even rare breaks will leave the nerve fibers unacceptably fragmented. “I am confident that we, as a field, will be able to solve that as well”, says Winfried Denk. Against the background of the deciphering of the human genome, this actually does not sound unlikely: When the first DNA sections were decoded in the mid-1970s, the sequencing of an entire human genome initially seemed as impossible as now does the connectomic mapping of an entire human brain.

In this automated process, an electron microscope scans the surface of a tissue sample and saves the resulting picture. Next, the device removes an ultra-thin tissue slice and again scans the now novel surface of the sample. In this way, a tissue sample is scanned level for level before it is reassembled in the computer into a 3D image of the original sample. [published in PLoS Biology 2, 2004]