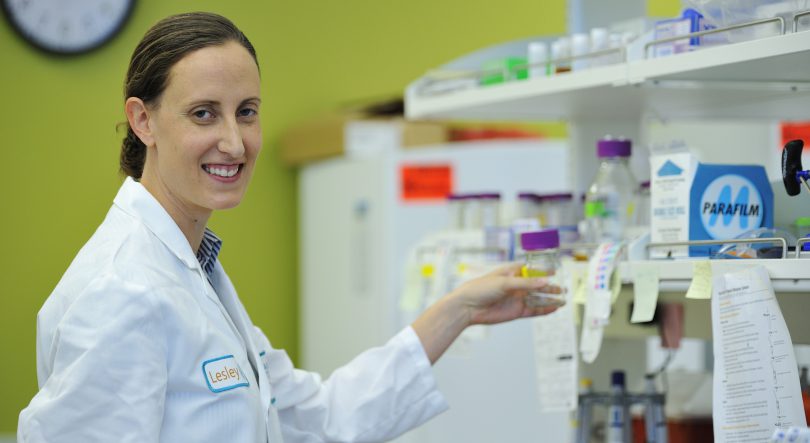 Lesley Colgan, Ph.D. is a Postdoctoral Researcher in the lab of Scientific Director Ryohei Yasuda, Ph.D. Her research focuses on neuroplasticity – the ability to strengthen or weaken synapses. Since joining the lab in 2012, Colgan has developed a series of optical sensors for molecules that may be important in this process. The sensors provide the sensitivity and specificity necessary to study certain proteins at the single-synapse level, allowing Colgan to probe the actual events occurring during neuroplasticity.

Colgan has been studying the protein kinase C (PKC) family, which is known to play a role in learning and memory and has also been implicated in cancer. Using a highly sensitive and quantitative method of imaging known as FLIM-FRET, Colgan is working to disentangle the signaling network that PKC family members are involved in. Her optical sensors can be implanted into neurons to enable visualization of PKC activity. She can then induce neuroplasticity in a single spine through uncaging of glutamate, which causes the spine to grow in size and corresponds to a functional strengthening of the synapse. By measuring the change in fluorescence lifetime of the sensor, Colgan is able to determine what proportion of PKC molecules are activated at a given time.

Knockout or disruption of PKC family members results in a loss of plasticity in dendritic spines, supporting the notion that they are absolutely required for synaptic plasticity. One member of the classic subfamily, PKC-α, is activated very rapidly when plasticity is induced in a spine. PKC-α acts by integrating upstream signaling of two very well-known canonical pathways: NMDA receptor amplification of calcium influx, which is known to mediate the very early signaling of plasticity, and BDNF activation of its receptor TrkB, which was classically thought to be involved in later stages of plasticity. This data suggests that BDNF also plays an early role in plasticity and that integration of these two pathways by PKC-α leads to downstream signaling events that induce the strengthening of spines.

Of the 12 PKC family members, PKC-α seems to be one of only a few involved in synaptic plasticity in single dendritic spines. Colgan is looking at the spatiotemporal activation patterns of other isozymes that may also be involved in plasticity. One such isozyme is activated in the dendrite underneath the spine, exhibiting activity that spreads along the dendrite and is sustained for a much longer period of time than PKC-α.

Colgan is optimistic about future applications of FLIM-FRET, which she believes may soon be used to probe neuroplasticity in vivo. In the long-term, Colgan is interested in looking at how neuromodulation affects learning and memory at the cellular level. For example, the cellular mechanisms of stress are not very well understood. Physiologically, stress is beneficial to a certain extent, but too much stress can inhibit learning and memory. Stress receptors are often coupled to PKC isozymes downstream, presenting an opportunity for Colgan to explore how neurotransmitters engage the PKC isozymes to elicit a neuromodulatory effect on plasticity.