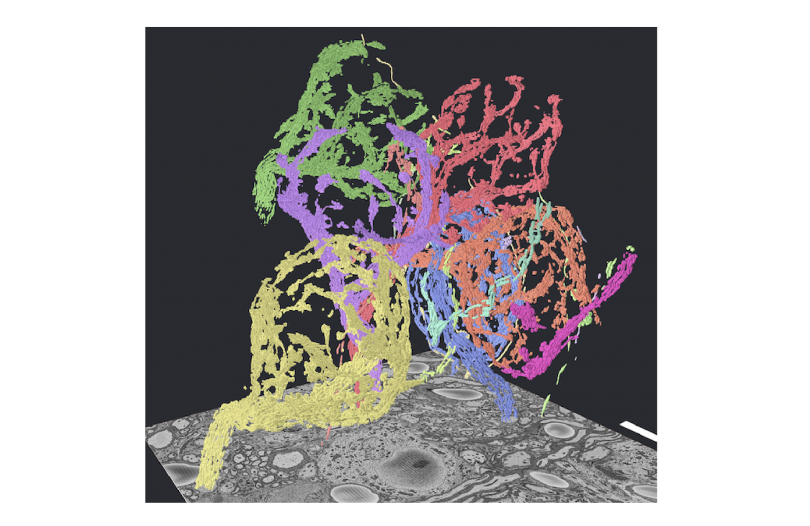 The calyx of Held, a large glutamatergic presynaptic terminal in the auditory brainstem undergoes developmental changes to support the high action-potential firing rates required for auditory information encoding. In addition, calyx terminals are morphologically diverse which impacts vesicle release properties and synaptic plasticity. Mitochondria influence synaptic plasticity through calcium buffering and are crucial for providing the energy required for synaptic transmission. Therefore, it has been postulated that mitochondrial levels increase during development and contribute to the morphological-functional diversity in the mature calyx. However, the developmental profile of mitochondrial volumes and subsynaptic distribution at the calyx of Held remains unclear. To provide insight on this, we developed a helper-dependent adenoviral vector (HdAd) that expresses the genetically encoded peroxidase marker for mitochondria, mito-APEX2, at the mouse calyx of Held. We developed protocols to detect labeled mitochondria for use with serial block face scanning electron microscopy to carry out semi-automated segmentation of mitochondria, high-throughput whole terminal reconstruction and presynaptic ultrastructure in mice of either sex. Subsequently, we measured mitochondrial volumes and subsynaptic distributions at the immature postnatal day 7 (P7) and the mature (P21) calyx. We found an increase of mitochondria volumes in terminals and axons from P7 to P21 but did not observe differences between stalk and swelling subcompartments in the mature calyx. Based on these findings, we propose that mitochondrial volumes and synaptic localization developmentally increase to support high firing rates required in the initial stages of auditory information processing.