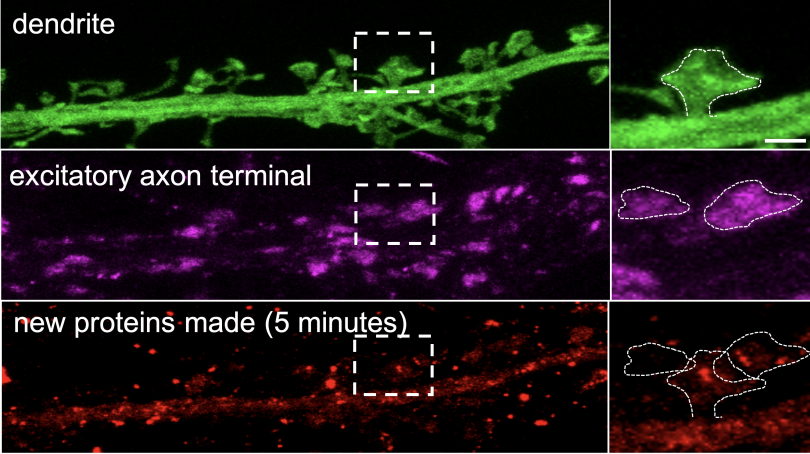 Hafner, Donlin-Asp et al. Proteins are made in mature neuronal axon terminals. Shown is a physically-expanded brain sample where a neuronal dendrite and its’ associated synaptic compartments (“spines”) is shown in green. The synaptic spine (outlined by the dashed box) shown magnified to the right has been physically expanded to ~4x its original size (scale bar = 2 microns). This expansion and optimized molecular tools allowed the Schuman team to visualize the associated presynaptic axon terminals (shown in magenta) and to visualize the sites where new proteins are made (shown in red). In this case, the dendritic spine, the dendrite, and 1 of the 2 axon terminals shown made new proteins within just 5 minutes. Within a 5 minute window, the scientists found that 60% of all spines made new proteins and about 40% of all axon terminals made new proteins. These percentages were significantly increased by different kinds of synaptic plasticity, the phenomena thought to underlie learning and memory formation (figure: MPI for Brain Research).

Proteins, the essential building blocks and machines of all cells, have a limited lifetime. Within the span of a week or so, proteins are made, carry out their functions, and then are destroyed. In most cells, proteins are made and function in the cell body. Brain cells (“neurons”) are different. Neurons have a cell body, but most of the neuron is made up of the long and elaborate processes, the dendrites and axons, specialized for receiving and transmitting information at tiny junctions called synapses. Because these processes are very thin and long (axons can be up to 1 meter in length), a protein made in the cell body and then transported could spend most of its lifetime “en route”. Also, if synapses need to rapidly change their proteins (for example, during learning and memory) transport from the cell body is just too slow. To solve this problem, neurons have implemented a local solution- they make proteins “on-site”. In the upcoming May 17th issue of Science, an international team of scientists, led by Erin Schuman, director at the Max Planck Institute for Brain Research, use new labeling methods, RNA sequencing technology and advanced microscopy techniques to visualize directly the messenger RNA molecules, the protein making machines, and the proteins themselves directly at synapses, in particular the tiny compartment known as the axon terminal- where neurotransmitters are stored and released.

Neurons form remarkably complex networks. Their processes, called dendrites and axons, range from hundreds of microns to up to 1 meter in length and contain up to 1000-10000 synapses. Synapses are densely packed with proteins that have a lifetime of a few days to a week or so. A single neuron contains about 50 billion proteins- these proteins are needed for the essential functions of the neuron but also exploited to change how the neuron responds to inputs- a process called “synaptic plasticity”.

Changes in the proteins present at synapses underlie learning and memory. Given the huge size and complicated shape of a neuron, the seemingly simple process of protein supply is a big challenge. Work over the past 20 years has shown that in neuronal dendrites, neurons solve the problem by shipping out both the messenger RNAs (the template for the protein) and the protein synthesis machines (the ribosomes)- and then using these elements to make proteins on-site and on-demand. A big open question, however, has been whether the same mechanism is used in fully developed axons.

“A wealth of data demonstrates that protein synthesis occurs locally in mature dendrites, but surprisingly, mature axons have received much less attention”, notes Schuman. “It has historically been challenging to reliably detect ribosomes, the protein synthesis machines, in axons or terminals.”

Axons are much thinner and encompass a larger area than dendrites and thus are much harder to see and study. Much of the evidence for protein synthesis in neuronal dendrites has come from studies where scientists have directly visualized the mRNAs and the new proteins. Making matters more difficult, the junction separating the dendrite from the axon (“the synaptic cleft”) is just ˜20 nm wide (for comparison, a human hair is 4000 times wider than a synaptic cleft!).

To overcome this limitation, the study’s co-first authors, Anne-Sophie Hafner and Paul Donlin-Asp, postdoctoral scholars in the Schuman laboratory, optimized a suite of techniques for detecting the protein synthesis machinery and the new proteins themselves. They used a newly developed method, expansion microscopy, that physically swells the synapse to 4 times its original size- making it easier to see things. “We unambiguously identified protein synthesis machinery in individual synaptic compartments; over 75% of the axonal terminals contained RNA and ribosomes” says Donlin-Asp.

To obtain direct evidence for protein synthesis in synaptic compartments, Schuman and her team further adapted a metabolic labeling strategy for detection with electron or expansion microscopy. “We were surprised to find high levels of ongoing protein synthesis in both axons and dendrites”, says Hafner. The team went on to isolate and purify synapses and directly identified the mRNAs that were present using RNA-sequencing. Over 450 mRNA molecules were selectively enriched in one particular type of synapse.

Driven by their discovery, the researchers examined the level of protein synthesis driven by different forms of synaptic plasticity within dendritic compartments and presynaptic axon terminals. Their findings suggest differential patterns of stimulation invoked protein synthesis in dendrites and axon terminals. “Our results provide an unprecedented resolution on the ‘where’ and ‘when’ newly made proteins remodel synapses”, says Hafner.

“Local protein synthesis adds an important source of protein and dysregulation has been associated with many neurological disorders. Thus, our findings are not only exciting in the light of fundamental science but could potentially also be exploited for biomedical research”, Schuman says.