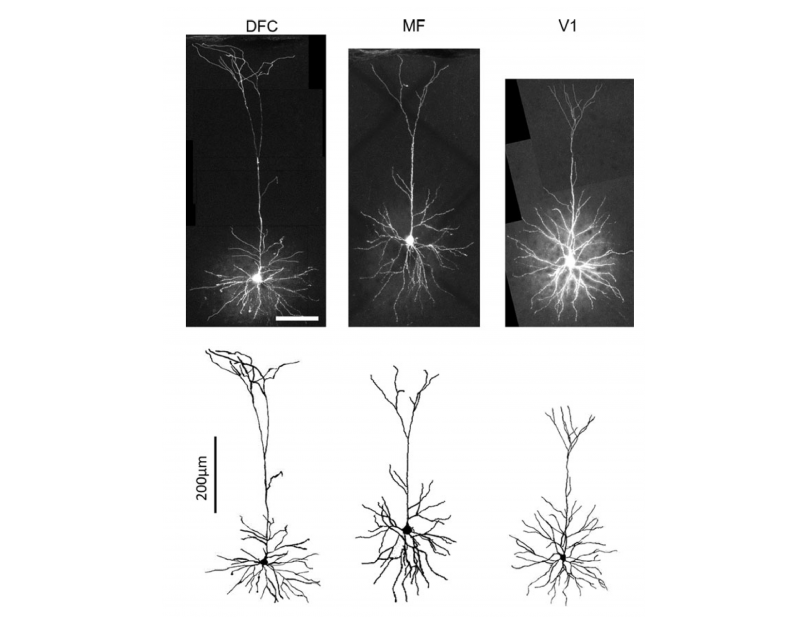 Representative fluorescent and traced images of neurons from the 3 areas of interest. Top: Stitching of ×25 confocal images tiled to encompass the whole neuron. Scale bar: 100 μm. Bottom: Images of the dendrites traced with Neurolucida 360.

The mammalian cerebral cortex is divided into different areas according to their function and pattern of connections. Studies comparing primary visual (V1) and prefrontal cortex (PFC) of primates have demonstrated striking pyramidal neuron (PN) specialization not present in comparable areas of the mouse neocortex. To better understand PFC evolution and regional PN specialization, we studied the tree shrew, a species with a close phylogenetic relationship to primates. We defined the tree shrew PFC based on cytoarchitectonic borders, thalamic connectivity and characterized the morphology and electrophysiology of layer II/III PNs in V1 and PFC. Similar to primates, the PFC PNs in the tree shrew fire with a regular spiking pattern and have larger dendritic tree and spines than those in V1. However, V1 PNs showed strikingly large basal dendritic arbors with high spine density, firing at higher rates and in a more varied pattern than PFC PNs. Yet, unlike in the mouse and unreported in the primate, medial prefrontal PN are more easily recruited than either the dorsolateral or V1 neurons. This specialization of PN morphology and physiology is likely to be a significant factor in the evolution of cortex, contributing to differences in the computational capacities of individual cortical areas.