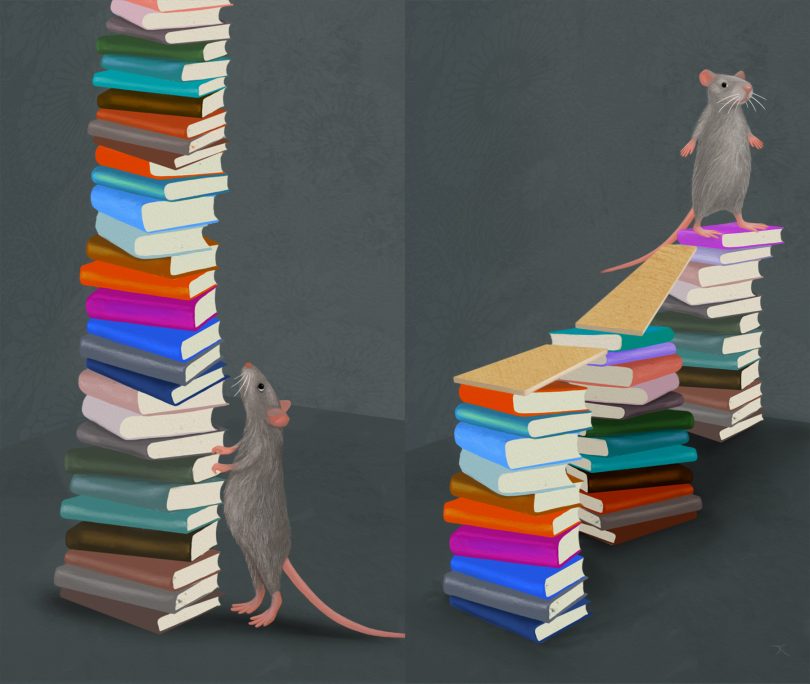 Longer breaks during learning lead to more stable activation patterns in the brain.

We remember things longer if we take breaks during learning, referred to as the spacing effect. Scientists at the Max Planck Institute of Neurobiology gained deeper insight into the neuronal basis for this phenomenon in mice. With longer intervals between learning repetitions, mice reuse more of the same neurons as before – instead of activating different ones. Possibly, this allows the neuronal connections to strengthen with each learning event, such that knowledge is stored for a longer time.

Many of us have experienced the following: the day before an exam, we try to cram a huge amount of information into our brain. But just as quickly as we acquired it, the knowledge we have painstakingly gained is gone again. The good news is that we can counteract this forgetting. With expanded time intervals between individual learning events, we retain the knowledge for a longer time.

But what happens in the brain during the spacing effect, and why is taking breaks so beneficial for our memory? It is generally thought that during learning, neurons are activated and form new connections. In this way, the learned knowledge is stored and can be retrieved by reactivating the same set of neurons. However, we still know very little about how pauses positively influence this process – even though the spacing effect was described more than a century ago and occurs in almost all animals.

Annet Glas and Pieter Goltstein, neurobiologists in the team of Mark Hübener and Tobias Bonhoeffer, investigated this phenomenon in mice. To do this, the animals had to remember the position of a hidden chocolate piece in a maze. On three consecutive opportunities, they were allowed to explore the maze and find their reward – including pauses of varying lengths. “Mice that were trained with the longer intervals between learning phases were not able to remember the position of the chocolate as quickly,” explains Annet Glas. “But on the next day, the longer the pauses, the better was the mice’s memory.”

During the maze test, the researchers additionally measured the activity of neurons in the prefrontal cortex. This brain region is of particular interest for learning processes, as it is known for its role in complex thinking tasks. Accordingly, the scientists showed that inactivation of the prefrontal cortex impaired the mice’s performance in the maze.

“If three learning phases follow each other very quickly, we intuitively expected the same neurons to be activated,” Pieter Goltstein says. “After all, it is the same experiment with the same information. However, after a long break, it would be conceivable that the brain interprets the following learning phase as a new event and processes it with different neurons.”

However, the researchers found exactly the opposite when they compared the neuronal activity during different learning phases. After short pauses, the activation pattern in the brain fluctuated more than compared to long pauses: In fast successive learning phases, the mice activated mostly different neurons. When taking longer breaks, the same neurons active during the first learning phase were used again later.

Reactivating the same neurons could allow the brain to strengthen the connections between these cells in each learning phase – there is no need to start from scratch and establish the contacts first. “That’s why we believe that memory benefits from longer breaks,” says Pieter Goltstein.

Thus, after more than a century, the study provides the first insights into the neuronal processes that explain the positive effect of learning breaks. With spaced learning, we may reach our goal more slowly, but we benefit from our knowledge for much longer. Hopefully, we won’t have forgotten this by the time we take our next exam!