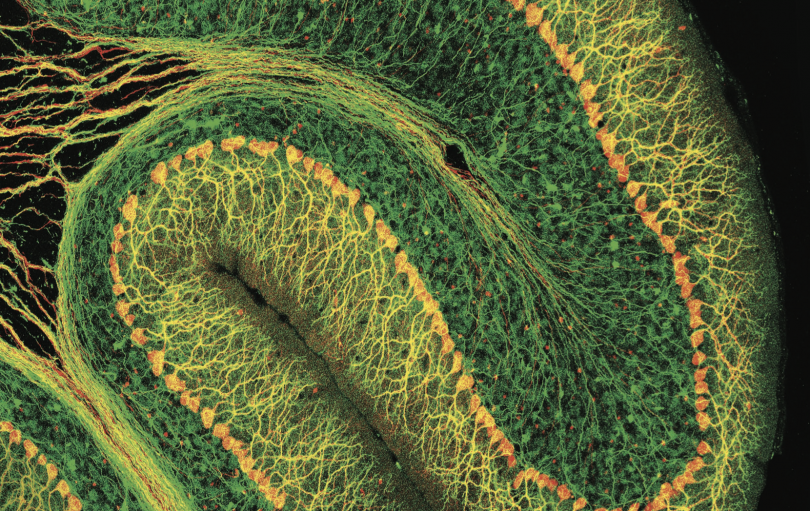 – The ability to make simple reaching motions or drive a car depends on the brains ability to guide action in a region of the brain called cerebellum.
– When the interaction of the cells within the cerebellum is disrupted, people experience fundamental disturbances in their motor function, making these simple actions difficult, or even impossible.
– The process of improving motor skills through practice is called motor learning and it is regulated by complex neuronal signaling within cerebellar circuits.
– Researchers have optimized the techniques for studying motor learning in order to repeatedly assess the activity of neurons for days, weeks, or even months.
– These sophisticated approaches allow the further characterization of the neurons that are continuously engaged during motor activity and normal behavior.

Advancing our understanding of neural circuits

The cerebellum is a region of the brain that plays an important role in motor control. The Purkinje cells, a class of neurons located in this region, are a major site of information integration that regulate changes in neural connections caused by varying factors such as behavior, environment, and emotions. Thus Purkinje cells provide an ideal location for studying the mechanisms necessary for cerebellum dependent motor learning.

Motor learning is a process that occurs over several weeks or even months. For researchers to better understand neuronal activity during this process, they need to determine the patterns of activity over the entire course of motor learning. However, imaging the activity of the same neurons over such an extended time period had been difficult using conventional methods. In their January publication in the Journal of Neurophysiology, researchers Michael A. Gaffield, Ph.D., Samanta B. Amat, and Jason M. Christie, Ph.D., describe the modification of imaging and behavior techniques allowing them to monitor the activity of Purkinje cells over seven consecutive weeks during the course of a motor association task, in particular, the licking behavior of mice. The optimized imaging ad behavior approach demonstrated that, in a selective group of Purkinje cells, calcium activity remained in a stable activation pattern over many weeks – a discovery that was only possible due to their optimized approaches.

According to Dr. Gaffield, the sophisticated behavior tasks, used in combination with genetic reporters and effectors of activity, have opened up the possibility of studying cerebellar circuits during voluntary movement at an unprecedented level of quantitation. Dr. Christie’s research team will further investigate the activity of Purkinje Cells in motor learning and the potential modifications in their activity caused by a perturbation on their behavior. “Our work brings significant insight into the understanding of neural circuits within the cerebellum, which will be essential to understand how these circuits are altered in pathological conditions,” explained Dr. Christie.