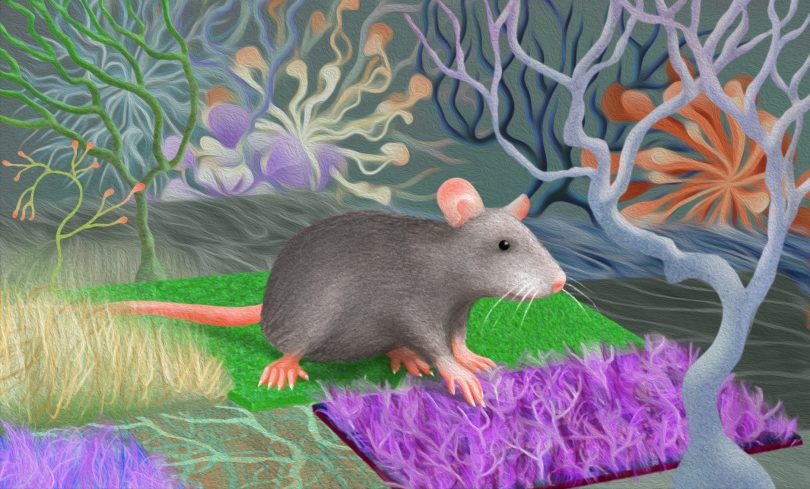 Spinal neurons process tactile information. Along with feedback from the brain, these neurons are able to refine the motions of the legs. (c) MPI of Neurobiology / Kuhl

Many people are uncomfortable when walking barefoot across stones or gravel. Cushioned by shoes and guided by the eyes and sense of balance, walking becomes much easier. However, the sense of touch is also important for the coordination of movements in mice; a study from the Max Planck Institute of Neurobiology now shows. The researchers found Zic2-neurons in the spinal cord to process tactile information. Along with feedback from the brain, these neurons refine the motions of the legs, which becomes especially important on a challenging ground.

To feel alive. This notion reflects the importance of the sense of touch. Touch provides information about our environment and thus influences innumerous behaviors. However, we know surprisingly little about the neuronal processing of tactile information. Scientists from Rüdiger Klein’s department have now shown in mice that Zic2-neurons are able to adapt motion sequences based on tactile information.

Sónia Paixão and her colleagues found that Zic2-neurons receive information about light touch and texture from the skin’s receptors. If necessary, Zic2-neurons are then able to alter a motion via connections to motor neurons in the spinal cord – for example to retract a foot when stepping on something unusual, or to select the softest place for a nap. Yet this pathway is only part of the role that Zic2’s connections play. The neurons also transmit tactile information “bottom up” via the postsynaptic dorsal column pathway to the brainstem.

“We suspected this connection to the brain stem from a previous study”, explains Paixão. “The functional analyses of our current study now showed that activating this bottom up pathway increases the animals’ sensitivity to touch.”

In addition, the team found that Zic2-neurons receive information directly from the motor cortex and other brain regions. These “top down” pathways from the brain to Zic2-neurons in the spinal cord could be important to fine-tune walking in mice.

Mice are excellent climbers and have little difficulty when crossing even narrow, sleek beams. Even without the sensory information from the Zic2 neurons, the mice were able to cross such a difficult beam. However, their feet slipped much more often. “We think that the brain has difficulties to place the paws correctly if it lacks the Zic2-neurons’ information about the surface properties”, explains Rüdiger Klein, the head of the study.

“Thanks to the now available methods, we are finally able to investigate how sensory information is processed and influences behavior”, clarifies Sónia Paixão. “This study shows already that some spinal cord neurons integrate tactile information and cortex signals to generate complex walking patterns.” The newly described role of the Zic2 neurons and their connections is thus an important step towards a better understanding of how neuronal circuits affect the perception of touch and coordinate walking behavior.