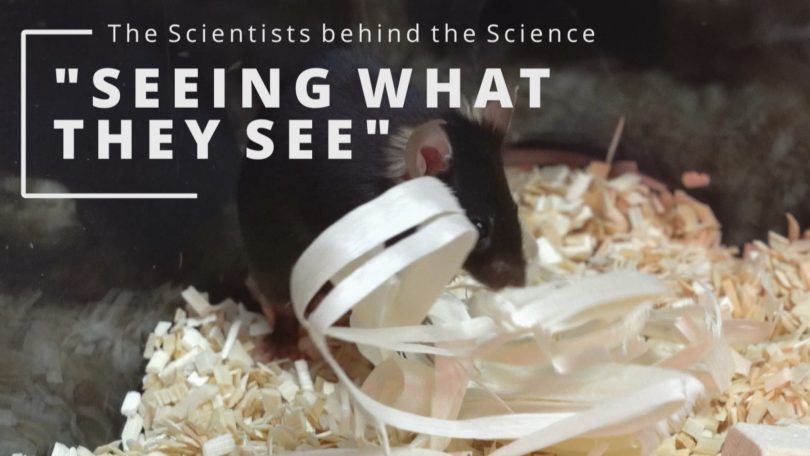 Scientists behind the Science - Seeing what they see

A new method to reconstruct the point-of-view of a freely moving animal.

How does a mouse use its eyes to accurately target and catch a fleeing cricket? Researchers at caesar developed a new method to reconstruct the ‘view through the eyes’ of an animal as it detects and tracks its prey. They recorded eye and head movements of freely moving mice hunting crickets whilst the position of both the mice and prey were being measured in the arena. A new environment digitization approach, combined with mathematical analysis, recreated what the mouse would see during its hunt. This enabled the “view through the eyes” to be correlated with a distinct behavior. Unlike humans, mice cannot voluntarily move their eye position. With this approach the researchers showed that they adjust their behavior to keep the prey’s image on a small, specialized area of the retina. This specialized area coincided with the area of the least motion-induced blur when the mouse is running forward, allowing it to accurately form an image as it chased its prey. These developments will allow scientists to unravel the neuronal activity underlying a complex behavior triggered by specific sensory inputs – at the level of single time points.

Mice rely on their vision for most of the important aspects of their complex lives such as avoiding predation by detecting overhead predators and chasing prey, caring for their young and navigating in the world. They have a large visual field of view, which vertically subtends from behind the animal’s head to below the snout and laterally to behind the head on both sides. Unlike in humans and other primates, specialized eye movements constantly counter the head movement to stabilize this panoramic field of view. As mice are unable to move their eyes without a simultaneous head movement, a so far unanswered question was what part of the large visual field do they use when tracking a prey? And what advantage is this to the animal?

Given the strong yoking between the eye movements and head movements, answering this question requires measuring from a freely moving mouse chasing an object of interest. To this end, Dr. Carl Holmgren and other members from the research group around Professor Jason Kerr developed a new method. They recorded precise eye and head rotations in freely moving mice detecting and tracking crickets. These measurements were combined with a digital high-resolution reconstruction of the behavioral arena to form a detailed visual map from the animal’s eye perspective. This setup allows to directly measure how the environment and objects move across the retina relative to each other and to quantify the exact “optic flow” – the motion pattern generated at the animal’s eye when moving through the environment. In addition, it monitors the behaviors that the mouse employs to track and capture the cricket. “Now we have the ability to go from a recorded visually guided behavior to a frame-by-frame view of what the animal was seeing as the behavior evolves. We can break down a behavior into its component parts, and we can see where in the visual field was the object that the animal was trying to track.” explains Carl Holmgren.

Using this new approach, Holmgren and colleagues showed that once mice detect a cricket in any part of their large field of view, they orientate towards the cricket and then run straight at it. If the cricket jumps away, they re-detect it and repeat this behavior. The researchers discovered that during the pursuit the cricket’s position was mainly located on a small area in the visual field, which corresponded to a specialized area on the retina that was previously hypothesized to be critical to tracking objects, but never shown. In addition to the prey image falling within a small retinal area, this area also coincided with a region of least optic flow in the visual field and consequently was the area of least motion-induced image blur when running forward.

“We developed a new approach for quantifying what part of a visual field an animal attends to when performing complex visually based behaviors. The next step is to reveal the neuronal activity that underlies the behavior using our newly developed three-photon head-mounted microscope” says Professor Jason Kerr, director of the Department Behavior and Brain Organization and current managing director of caesar.

caesar is a neuroethology institute located in Bonn that studies how the collective activity of the vast numbers of interconnected neurons in the brain gives rise to the plethora of animal behaviors. Our research spans a large range of scales from the nano-scale imaging of brain circuitry, to large-scale functional imaging of brain circuitry during behavior, to the quantification of natural animal behaviors.