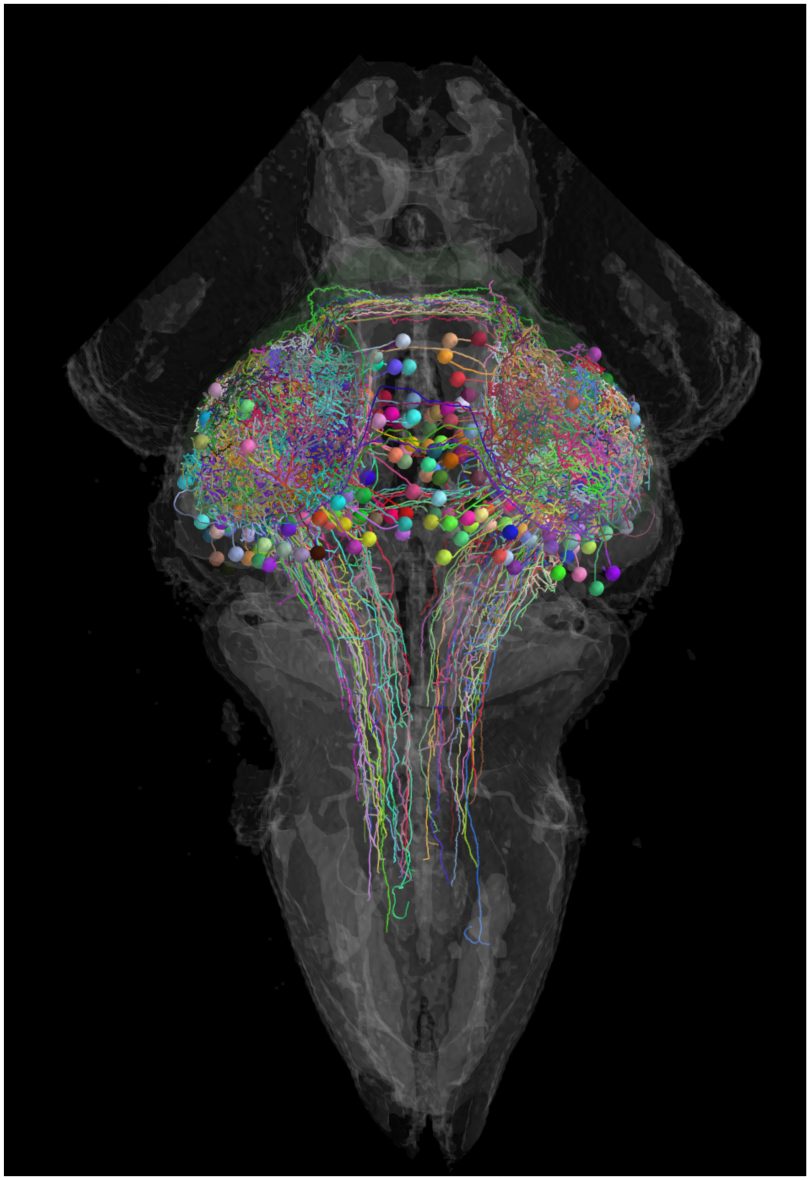 Predator or prey? Neurobiologists demonstrate which nerve cell pathways cause a zebrafish to move towards an object or to flee from it. (c) MPI of Neurobiology / Helmbrecht

Prey or predator? The brain has only a split second to evaluate an unknown object and decide whether to hunt it or to escape from it. To ensure that nothing goes wrong, the fish brain processes each of these decisions via a separate nerve tract.

We don’t need to think twice: if an object is approaching on a collision course, we quickly get out of its way. But if something captures our interest, we move directly towards it. Little is known about how the brain classifies visual objects as either attractive or threatening, and how this information is channeled to initiate an appropriate behavior. This gap in our knowledge is now being filled.

Zebrafish larvae are about five millimeters long and almost transparent, so that we can peek into their brain while it is engaged in a behavioral task. With the aid of newly developed optical and genetic methods, scientists are now able to observe the activity and activation sequence of individual nerve cells. Scientists are thus able to follow the transition from a visual perception to a behavior in real time under the microscope. What the neurobiologists discovered is that “predator” or “prey” categories each activate a dedicated nerve tract to steer behavior.

Previous studies had indicated that this activity originates in the tectum of the fish brain. Humans also have such a tectum, the superior colliculus, which is thought to have very similar functions. To understand what happens in the fish tectum at the cellular level, Thomas Helmbrecht from the Max Planck Institute of Neurobiology studied the reaction among young fish to virtual dots, while observing the activity of their nerve cells and manipulating them using optogenetic methods.

Depending on the size and animated movement, the dots were initially classified as prey or predator in the tectum of the zebrafish. The tectum then transmitted the decision made in each case to the hindbrain via one of two different, spatially separate pathways of nerve cells.

The neurons at the end of the signal chain initiated either an avoidance or approach movement, depending on which of the two pathways carried the information. The scientists were also able to demonstrate that the nerve cells transmitted precise data relating to the position of the potential prey via the approach pathway. The muscles can evidently be controlled by the neurons in such a way that the young fish is able to swim directly towards its prey.

At least 29 different nerve cell types in the tectum project information throughout the brain. “We now want to find out in detail how these individual cell types contribute to behavior,” explains Herwig Baier, in whose laboratory the experiments were conducted. “For the first time, we have the opportunity to fully reconstruct the brain activity that forms the basis of a complex behavioral decision, from the sensory input all the way to the motor output.”