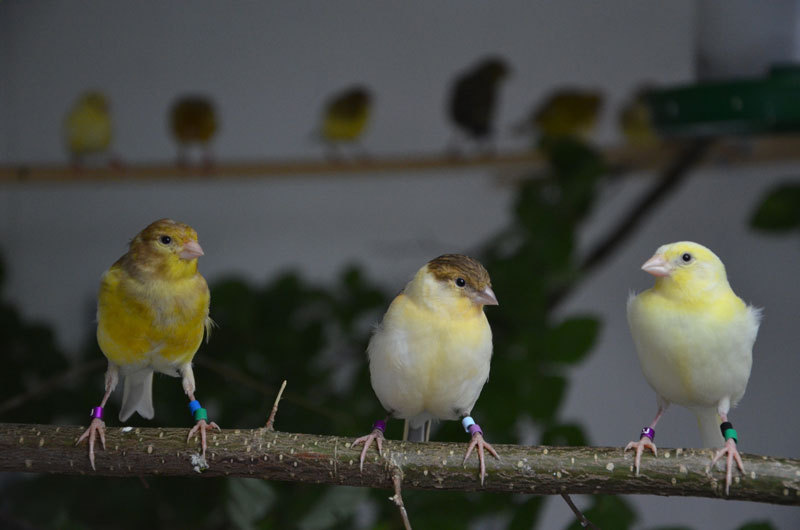 Young canaries at the age of 110, 72, and 39 days (from left). During their development they were exposed to different amounts of adult singing. © MPI f. Ornithology/S. Leitner

Most songbirds learn their songs from their father or other male conspecifics. The variables that control the song learning process in a natural social environment are still largely unknown. Scientists from the Max Planck Institute for Ornithology in Seewiesen now compared learned songs from male canaries that hatched at the beginning and at the end of the breeding season. During the song learning phase early hatched juveniles had a large number of adult tutors available whereas late hatched birds only heard a few or even no adult songs at all. The results showed that already in autumn both groups of birds were similar in their song organisation and song performance, which suggests that late-hatched males must have undergone accelerated song development.

Juvenile songbirds learn their songs in two phases, in the first step they hear an adult tutor song that they memorize in their brains. Afterwards they practice their song until it closely matches the saved template. The duration of these phases considerably varies between species, as well as the number of songs that a juvenile has to hear in order to sing a proper song. From playback studies it is known that hearing only a few songs can be sufficient for a juvenile to sing a decent song. However, the variables that control the song learning process in a natural social context are largely unknown.

Scientists from the Department of Behavioural Neurobiology at the Max Planck Institute for Ornithology in Seewiesen now investigated whether there are differences in the songs of domesticated canaries that hatch either early or late in the breeding season. In a large aviary containing more than 60 birds the researchers first measured song activity of adult males during the course of four months. They found that adult birds clearly decreased their singing rate towards the end of the breeding season and from the end of July on no more songs could be heard when the birds are ready to moult.

The researchers divided male hatchlings into two groups of early and late hatched birds and recorded their songs in their first autumn and the following spring. The analysis revealed an interesting result: Both in autumn, when the birds were still producing plastic song, and in the following spring as adults, the groups did not differ in their song organisation and song performance. However, there were differences in song between autumn and spring that were similar in both groups and agree with previous studies on seasonal song changes in adult male canaries. A similar seasonal pattern was also found when comparing the sex hormone testosterone that is known to influence reproductively important song parameters.

“The results suggest that late-hatched canaries show an accelerated song development. They further show that a reduced tutor availability has no substantial impact on the song development”, says Johanna Teichel, one of the authors of the study. “Alternatively it could be that juveniles do not have to hear the tutor song over an extended period but it might be rather important to hear it during a certain period, for example before the end of the song learning period in autumn when adults just start to sing again”, says Cornelia Voigt, last author of the study.