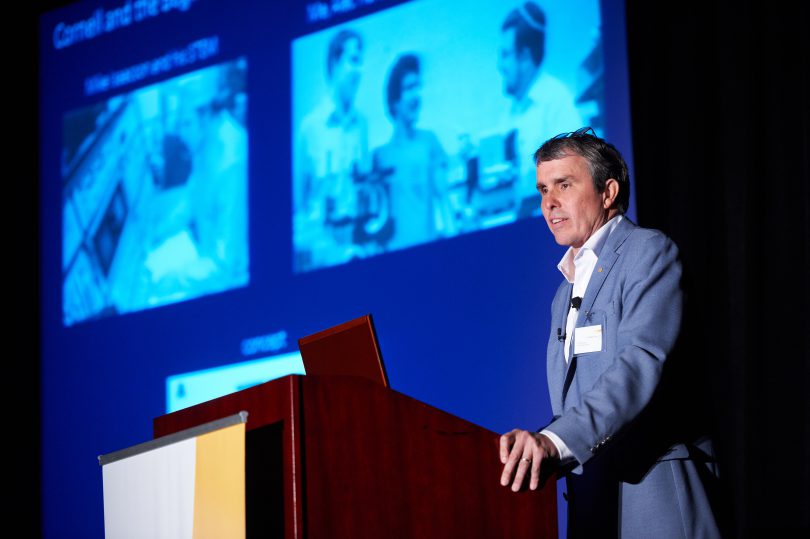 Twenty-three of the field’s most esteemed researchers spoke at the second international conference highlighting some of the most complex issues at the forefront of understanding neural circuits. The impressive two-day event hosted by Max Planck Florida Institute for Neuroscience (MPFI) was held March 30-31, 2015 at the PGA National Resort and Spa in Palm Beach Gardens, Florida. The event, which gets its name from South Florida’s characteristic year-round sunshine, attracted the brightest minds in neuroscience and was attended by over 270 scientists and students.

“Our panel of speakers have all made, and continue to make, significant contributions to what we know about the brain and the development of new technologies and techniques to study the brain in ways that weren’t possible before. They’re deeply passionate about what they do and their participation in Sunposium 2015 has made this a spectacular event for our neuroscience community,” said Dr. David Fitzpatrick, Scientific Director and CEO of MPFI.

In 2012, nearly 300 scientists and students traveled to The Breakers for the inaugural SunposiumTM. That two-day scientific exchange was hosted by MPFI and featured 6 Nobel laureates from Germany’s Max Planck Society and from research institutes and universities throughout the United States and Europe. Like this year’s event, it highlighted the challenges, latest findings and advances that address some of the most complex issues at the forefront of understanding neural circuits.

Comprehending the functional organization of neural circuits, and in particular, how the activity of neural circuits mediates behaviors provides the knowledge base that is critical for advances in treating neurological and psychiatric disorders. Educational forums like SunposiumTM encourage a collaborative, problem-solving approach to multiple aspects of brain function; processes that include the neural basis of sensory processing, motor control, learning and memory.

In addition to the popular evening scientific poster presentation and reception, SunposiumTM 2015 offered attendees four educational sessions that featured an impressive panel of 23 national and international leaders in neuroscience research including the Nobel laureate, Eric Betzig.

Betzig was the recipient of the 2014 Nobel Prize in Chemistry for the development of super-resolved fluorescence microscopy along with Stefan Hell of the Max Planck Institute for Biophysical Chemistry, and William Moerner of Stanford University. Their groundbreaking work has enabled scientists to visualize the pathways of individual molecules inside living cells. Thanks to their work, researchers can now see how molecules create synapses between nerve cells in the brain; they can track proteins involved in Parkinson’s, Alzheimer’s and Huntington’s diseases as they aggregate; and they follow individual proteins in fertilized eggs as these divide into embryos.

Betzig commented on the high-level scientific talks he’d seen throughout the conference, noting that he was impressed with his visit to the Max Planck Florida Institute for Neuroscience in Jupiter the evening before the meeting began. Along with the other speakers, he was given a tour of the laboratories and stopped by the institute’s mechanical workshop where custom equipment is made.

Max Planck Scientists and their international colleagues are in the forefront of neuroscience thought leaders. As evidence of this and in recognition of outstanding achievements in 2-photon fluorescence microscopy, 2015 SunposiumTM speaker and Max Planck scientist, Winfried Denk has just been selected to receive the world’s most valuable neuroscience prize. The Brain Prize 2015 will be presented this May in Copenhagen to Dr. Denk and these three other exceptional neuroscientists: Arthur Konnerth, Karel Svoboda and David Tank. Since 2011, Denk has been a director at the Max Planck Institute of Neurobiology, Martinsried.

MPFI sponsored over 20 undergraduate neuroscience students from Florida universities to attend the two-day event as part of the Max Planck Florida Scientific Fellowship program. Along with faculty members from their universities, the students attended all of the educational sessions and had opportunities to engage directly with the speakers.

“The students participation in this year’s Sunposium was wonderful to see and we’re so delighted we could offer them this opportunity. Not only did they hear an inspiring and passionate plenary lecture from Nobel laureate Eric Betzig, many joined him for lunch afterwards for a more intimate discussion about his journey throughout his career,” added Fitzpatrick. “This could be a life changing experience for some of these students.”