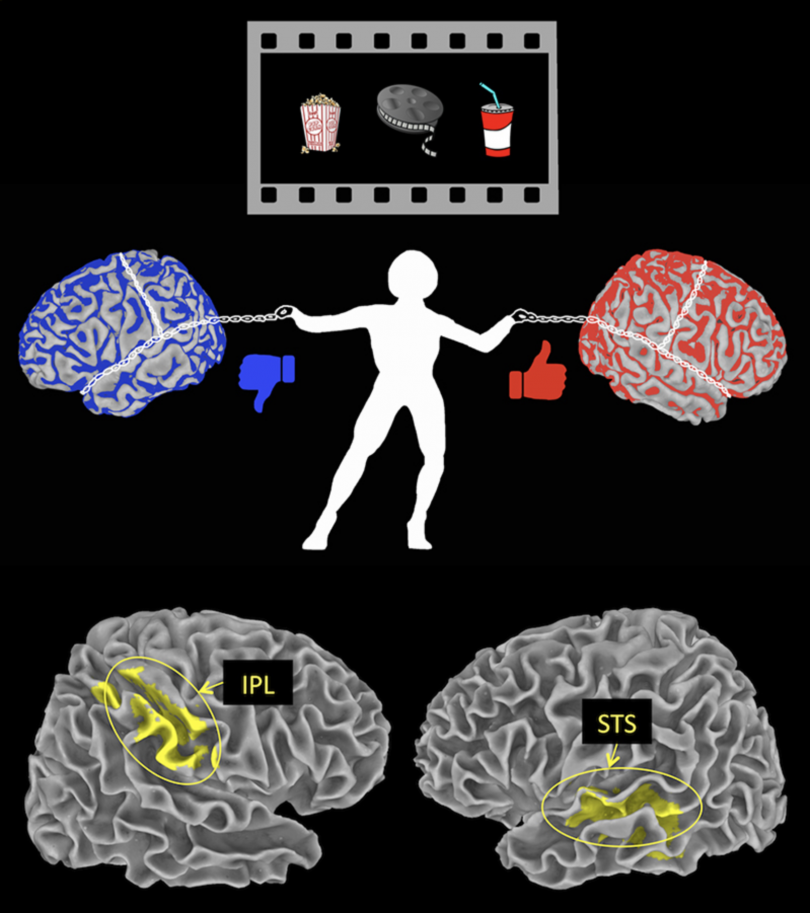 The superior temporal sulcus (STS) is responsible for interpreting positive situations, and the inferior parietal lobule (IPL) becomes active when we interprete a situation as being negative. © Christiane Rohr

When someone offends you while smiling, should your brain interpret it as a genuine smile or as an offense? Researchers at the Max Planck Institute for Human Cognitive and Brain Sciences in Leipzig and the University of Haifa, Israel, have identified neural mechanisms that help us understand whether a difficult social situation is emotionally positive or negative. To do this, they used emotionally confusing scenes from movies like Quentin Tarantino’s “Reservoir Dogs”.

When someone compliments us it is obviously positive. When someone attacks us we clearly understand that the situation is negative. But many social situations are more complex. A statement can be made cynically; someone may smile but seek to harm us; and the same sentence can have very different meanings depending on the tone of voice used. In these cases, it is important that our brain knows how to process the meaning of the emotional conflict properly–otherwise we might find ourselves responding happily when someone intends to insult us, or getting offended unnecessarily.

Now, researchers at the Max Planck Institute for Human Cognitive and Brain Sciences in Leipzig (MPI CBS) and the University of Haifa, Israel, have found the mechanisms in our brain that deal with such situations. “We identified two areas in the brain that act similarly to ‘remote controls’. Together they determine what value to attribute to a situation, and accordingly which other brain areas should be switched on or off”, explains study leader Christiane Rohr of MPI CBS.

During the study the participants watched emotionally conflicting movies, such as Quentin Tarantino’s “Reservoir Dogs”, while lying in a magnetic resonance scanner. This movie includes a scene where one person is torturing another while smiling, dancing, and talking to his victim in a friendly manner. Later the participants reported whether for them each watched scene included a conflict. Furthermore they rated to which extent they felt the positive or negative elements as being dominant and, correspondingly, whether the scene was pleasant or unpleasant to watch.

The analysis of the neuronal signals assessed via functional magnetic resonance imaging (fMRI) and the participants’ responses enabled the researchers to understand how the brain switches between the two different neural networks whereby one is triggered when we perceive a situation as positive, and another is activated when we perceive it as negative. The researchers found out that the switch is facilitated by two areas which form part of the positive respectively negative network: The superior temporal sulcus (STS) for the interpretation of positive situations and the inferior parietal lobule (IPL) for the interpretation of negative situations. These areas were also activated when the participants felt that the movie scene represented an emotional conflict.

“The two areas seem to ‘speak’ to each other and interpret the situation in order to decide which one will be switched on and which one will be switched off, thereby determining which network will be active”, says Hadas Okon-Singer, researcher at the University of Haifa. “The results suggest that these areas can influence the value, positive or negative, that will be dominant in an emotional conflict through control of other areas of the brain.”

Most people’s brains manage to process such emotional conflicts properly, but some people struggle to do so. This can lead to depression, anxious rumination, and a tendency to avoid social situations. Neuroscientists Rohr and Okon-Singer therefore hope that the discovery that these two brain areas process emotionally difficult situations will now facilitate further research to examine why this mechanism does not function properly in some people: “In the end we hope our investigations enable us to develop therapeutic techniques that help people to process emotionally confusing situations more adequately.”